The below-mentioned stocks have come with their FY19 results today i.e., 20th August 2019. All three stocks have witnessed growth in their revenues and earnings during FY19. Let’s take a look at the financial performances of these stocks.

Australian property group, Ingenia Communities Group (ASX: INA) has unveiled its FY19 results today. For FY19, the company has reported total revenue of $228.7 million, up 21% on the previous corresponding period (pcp). The company has reported a record EBIT of $61.5 million, up 26% on pcp with Underlying EPS of 21 cents, which is 19% higher than pcp. The growth in the EPS was driven by strong asset performance and increased settlements. The company’s gross operating income grew by 27% to $24.08 million in FY19 as compared to FY18. 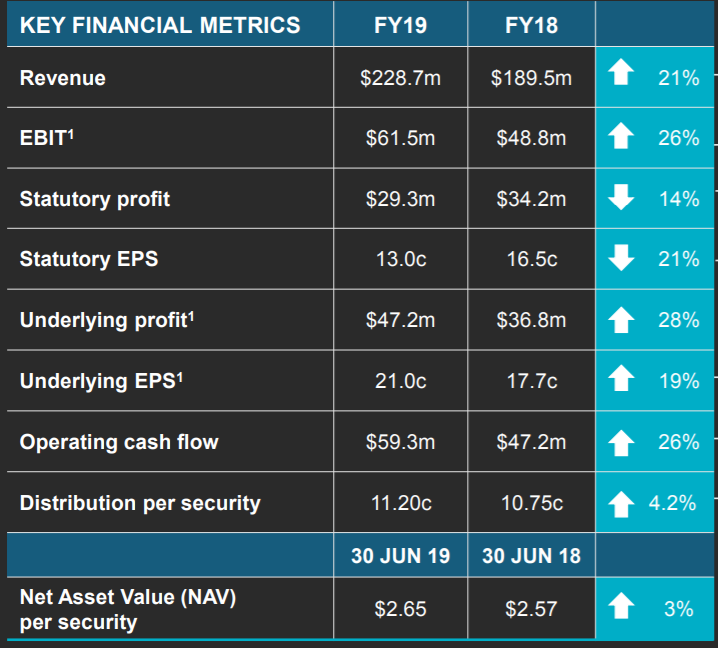 During the year, the company sold 336 turnkey homes and grew Lifestyle and Holidays rental income from permanent, annual and tourism clients to $67.7 million. Driven by the increase in settlements and rental income, the operating cash flow increased by 26% to $59.3 million in FY19.

The company has declared a final distribution of 5.80 cents per stapled security with a payment date of 26th September 2019.

While releasing the FY19 results, the company’s CEO, Simon Owen assured that the company is delivering on a number of initiatives to build out its rental base and create capital efficiency across the Group. These include acquiring established and new communities, the acquisition of a funds management business that provides co-investment opportunities, the creation of a development Joint Venture with Sun Communities, Inc. (NYSE: SUI), and growing new home settlements.

Seafood company, Tassal Group Limited (ASX: TGR) has reported record full year results for FY19 with operating NPAT growth of 12.5% and operating cashflow growth of 104.9% during the period. The company’s revenue grew by 15.7% to $560.8 million in FY19 while its operating EBITDA increased by 12.6% to $112.3 million.

The FY19 results are highlighting the strength of Tassal’s platform to generate continued, sustainable growth in shareholder returns. During the year, the company witnessed strong growth in its salmon biomass and sales driven by investments in capacity and supporting infrastructure. 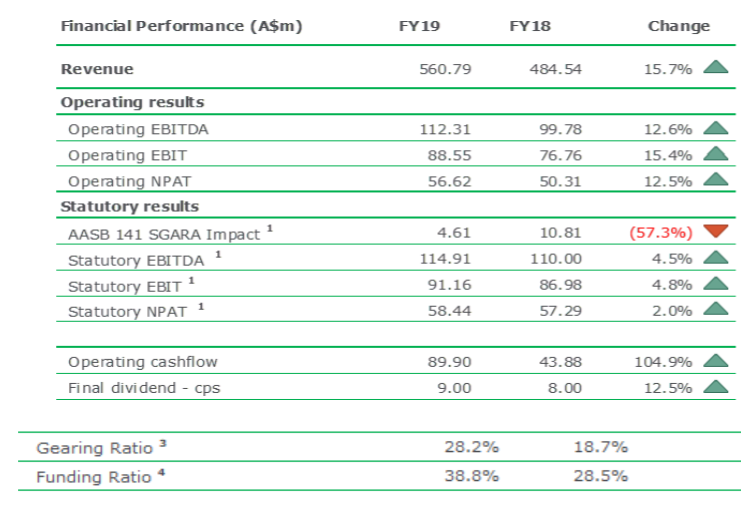 The company is committed to growing the prawn business with a focus on accelerating near?term earnings as well as securing the capacity necessary to support long?term growth in profitability. In FY2020, the company will continue to invest in state?of?the?art technology that supports a more efficient business.

In order to fund the accelerated prawn growth strategy, the company has today announced a ~$108 million capital raising. In addition to this, the company will also be undertaking a Share Purchase Plan (SPP) to raise up to an additional $25 million.

In the next two years, the company intends to invest around $85 million on the Proserpine expansion and Smart Farm initiatives to increase the pace of prawn production.

Aspen Group (ASX: APZ) is a property group which is involved in providing quality accommodations at reasonable prices.

In FY19, Aspen’s portfolio increased by 20% to $128 million, mainly through the acquisition of Highway 1 Tourist Park in Adelaide, and the addition of newly manufactured housing product at the company’s Four Lanterns Estate in Sydney.

The company has reaffirmed its earnings and distribution guidance for FY20 at 6.75-7.00 cents and 6.00 cents per security, respectively.

Following the release of FY19 results, the company’s stock witnessed a slight growth of 0.455% during the intraday trade as on 20 August 2019.