The below mentioned two Packaging stocks have recently come up with significant updates. Let’s take a quick look at the recent updates of these packaging stocks and how they have performed lately.

Pro-Pac Packaging Limited (ASX: PPG) is a diversified manufacturing and distribution business, which provides a combination of product and service solutions for packaging as a whole. Recently, the company reported a deterioration in its trading conditions and anticipated lower than expected revenues and margins in the second half of FY19. As a consequence, the company has revised its unaudited FY19 EBITDA (before significant items) guidance to around $28.0 million. Earlier, the company was expecting its full-year 2019 EBITDA (before significant items) to come at the lower end of its guidance range of $30 million to $33 million.

Furthermore, the company has communicated that both the Flexibles (including the recent acquisitions of Perfection Packaging and Polypak) and Rigid businesses are trading broadly in line with the expectations.

Perfection Packaging and PolyPak (NZ) businesses, acquired in the first quarter of FY2019, are currently operating as a value-add flexible film manufacturers for the company, supporting PPG’s strategy to diversify its business and expand its share in flexible packaging.

Recently, the flexibles manufacturing site in Kewdale, Western Australia suffered from an incident of fire, resulted in short-term challenges for the company to return to its full operational functionality.

On 16th April 2019, the company announced the appointment of highly experienced Mr Tim Welsh as a Chief Executive Officer, enriching the combined industry experience of the Board.

In the first half of FY19, the company reported a net profit after tax but before significant items of $6.6 million, up 63% compared to the prior corresponding period of $4.0 million. During the half-year period, the company experienced strong performances in its Rigid business and recent acquisitions. In the half-year period, the company earned a sales revenue of $257.3 million, which includes $99.5 million incremental revenue contribution from the acquisitions. Further, the company also reported improved operating margins (primarily from acquisitions) impacted by increased input costs, including resin, FX and higher energy costs.

In the second half, the major areas of focus for the company are sales-force effectiveness, integration identification and execution, operational efficiency program and working capital optimisation.

The company’s growth strategy is to:

A packaging company, Amcor plc (ASX: AMC) is primarily involved in providing packaging solutions for food, beverage, pharmaceutical, medical, home and personal care, and other products. Yesterday, the company announced the retirement of Mr Paul Brasher from the Amcor Board, effective from 30th September 2019. As per the announcement, the reason behind Mr Brasher’s retirement is his commitments to deal with some health-related issues. 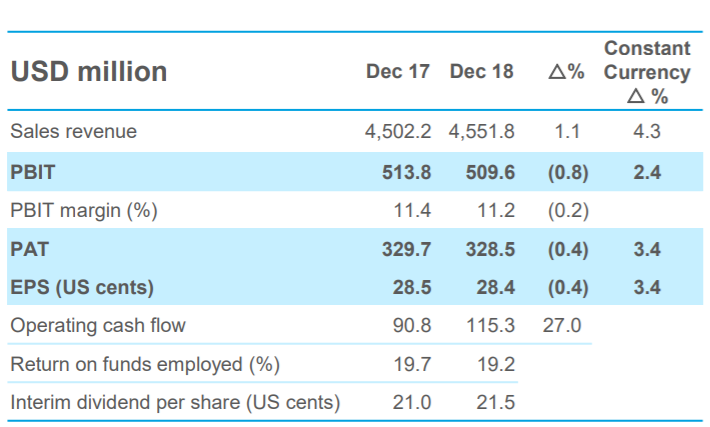 Additionally, the company reported profit before interest and tax (PBIT) of US$509.6 million and operating cash flow of US$115.3 million for H1 FY19. The earnings growth of the company was in line with its expectations and was balanced across the Flexibles and Rigid packaging segments.

During the half-year period, the company improved its world-class safety performance, with various recordable case frequency rate decreasing by 20% compared to the last year.

In the Asia Pacific region as well as in Europe, the Middle East and Africa, the company’s business delivered good sales growth, particularly with the large multinational customers.

In Europe, the Middle East and Africa, the cost and operating performance of the business was solid during the period. Moreover, the business secured a multi-year extension to the long-term relationship with Nespresso for the continued supply of coffee capsule packaging and for continued collaboration on sustainability initiatives, which is an encouraging piece of news for the company and its shareholders.

The company’s Specialty Cartons business also performed well during the period, with business wins in Asia and normalisation of volumes in Eastern Europe, following significant destocking last year, partly offset by decreased volumes in Western Europe. The operating cost performance of Specialty Cartons business was strong, although costs were higher in the Asia region as the plants in Indonesia and the Philippines on-boarded volumes transferred from the recently closed plant in Malaysia.

Since 31st December 2018, the company’s Directors have determined an interim dividend on ordinary shares, expected to be paid on 1st April 2019, of approximately US$249.0 million, representing a dividend of 21.5 US cents per share unfranked, of which 100% is to be sourced from the Conduit Foreign Income Account.

The company recently completed the acquisition of Bemis Company Inc, which brought additional scale, capabilities and footprint to Amcor.