Recently, the Australian economy has been a victim of several imbalances that impacted the sales, margins and capital allocations of the business. With the above scenario in place, the investors should now be eyeing the businesses that represent global growth opportunities and are open to the rising demand for software and data.

Benefits of Geographical Expansion: Exposure to multiple geographies as well as currencies help minimise the risk of imbalances while solely operating in Australia. In addition, operation in the foreign markets bring-in opportunities in the form of market growth and diversification. Expanding internationally helps the businesses to diversify their assets and protect their profits against unforeseen events, which in turn, adds value for the investors. Overall, expanding the business globally helps businesses attain both financial and operational growth in the form of increased revenues, new sales, investment opportunities, cost reduction, access to new talent and diversification.

Both software and data form a part of each aspect of the business be it sales, marketing, design or manufacturing. Moreover, businesses capture relevant data and use the information to analyse the details to reach to relevant business decisions and subsequent improvement in the operations. The software helps in management and transmission of the data in a better and efficient manner. The basic benefits lie in the ease of handling data, simplification of tasks, better customer relationships and an advantage over competitors.

Let us now have a look at a few examples of businesses that have incorporated the above two strategies in their operations.

Segment Results: The company witnessed 14.2% growth in Global Product segment revenues from North America despite a tough prior year comparison. Business in Europe also delivered strong growth with a 39.5% increase in revenues as compared to pcp at $51.4 million. Revenues from Australia and New Zealand reported an increase of 7.9%.

In the second half of the year, the company is planning the launch of its product Creatista® in Germany and Austria along with the expansion of business to Switzerland and Benelux and the addition of Turkey to its Sage brand.

Outlook: The company expects the EBIT growth rate for FY19 to be slightly above the current market consensus of ~11%. 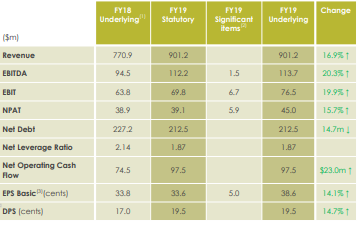 During the first half of the year, the company witnessed 69% growth in statutory net profit as compared to pcp.

International Presence: The company currently operates 37 stores in Europe and has continued to drive sales improvements in Germany and Netherlands with revenues amounting to $123.8 million, up 35.2% on pcp. Sizzler Asia also witnessed growth in both existing restaurant sales and new builds with royalty revenue going up by 12.2%. The company has a total of 77 restaurants in Asia at the end of FY19.

Cochlear Limited (ASX: COH) is a global leader in implantable hearing solutions with products, including cochlear implants, bone conduction implants and acoustic implants. The company recently updated that it has received FDA approval for the Nucleus® ProfileTM Plus Series cochlear implant. The commercial availability of the implant will begin in Germany followed by other European countries in the subsequent months, subject to the timing of regulatory approvals.

1H FY19 Highlights: During the period ended 31st December 2018, the company reported sales revenue amounting to $711.9 million, up 11% on pcp. Net profit for the period was reported at $128.6 million, up 16% on pcp. The period was marked by strong cash flow generation, which supported a 11% increase in the interim dividend to 1.55 cents per share. 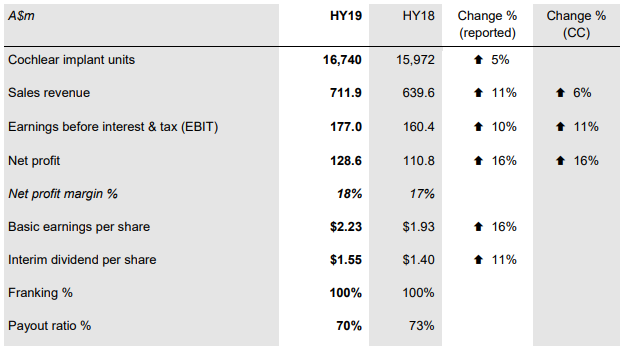 Altium Limited (ASX: ALU) is engaged in the development of computer software to design electronic products.

1HFY19 Highlights: During the period, the company generated strong revenue growth of 24% at US$78.1 million. Net profit after tax for the period amounted to US$23.4 million, up 58% on pcp. The EBITDA margin for the period stood at 36.3% as compared to 30% in pcp. 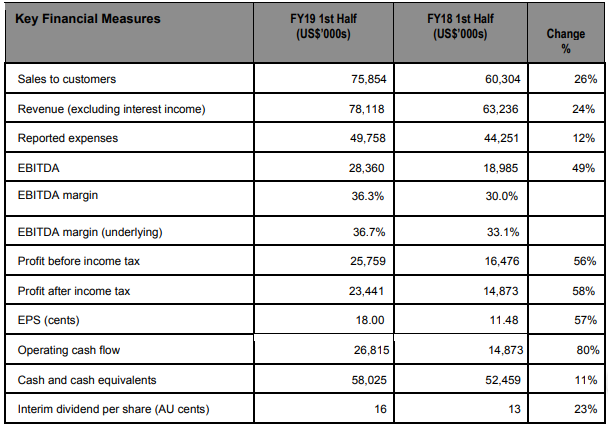 Business Performance: The company’s TASKING business revenue in the first half reported an increase of 35%, benefitting from its relationship with European semiconductor manufacturer, Infineon. Octopart business revenue grew at a remarkable rate of 80%. Revenues for Nexus reported a rise of 20% and for the Board and Systems increased by 17%.

Outlook: The company’s strong margin result portrays its ability to increase profit margins and boost revenue growth while investing for the future. The business is on track to achieve the 2020 targeted revenue of $200 million.

Elmo Software Limited (ASX: ELO) is a leading provider of cloud HR and payroll software in Australia and New Zealand.

In the March quarter, the company reported strong growth in cash receipts of $9.5 million, up 29% on pcp.

The period was characterised by accelerated growth strategies and expansion of the integrated product. The recent acquisitions of HROnboard and BoxSuite in January 2019, helped broaden the company’s suite of modules and increased the market share. FY18 acquisitions also contributed incremental revenues of $4.1 million in the first half.

Technology One Limited (ASX: TNE) engages in the development and sale of fully integrated enterprise business software solutions. The company recently updated that it has issued 698,617 fully paid ordinary shares. 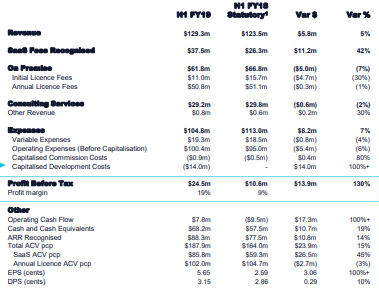 Outlook: The company’s SaaS business is growing rapidly with FY19 total ACV expected to grow at a rate of 20% to $213 million. There has been a consistent growth in the SaaS ACV starting from FY15 to FY18, which will now be forwarded to the current financial year.