Trending for Wesfarmers, Woolworths and Coles

Retail sector has been buzzing for quite some time now, but the raging bushfires could have some adverse impact on the sales. Thanks to the omni-channel retailing experience by companies, some respite from the possible lower sales due to bushfires could be expected.

Nonetheless, the economic loss due to bushfires could be felt at a broader level, as the level of destruction caused by bushfires may have a raging effect on the spending choices of the households too.

Retail trade data for November 2019 is scheduled for release by the Australian Bureau of Statistics on 10 January 2020. The November reading on the Westpac-Melbourne Institute Index of Consumer Sentiment had shown an increase of 4.5 per cent during the month after falling 5.5 per cent in October. Further, the Westpac-Melbourne Institute Index of Consumer Sentiment was down 1.9 per cent in December 2019 over the previous month, which had plunged 8.9 per cent over the previous corresponding period.

The three companies in discussion have been undertaking strategic decisions in the previous years, and there is a new proposed strategic roadmap by Woolworths that is likely to be undertaken this year, following the divestment of its petrol business.

In the previous year, the company undertook significant portfolio repositioning with the demerger of Coles Group Limited (ASX: COL), divestment of Kmart Tyre & Auto, and sale of ownership interests in Bengalla and Quadrant Energy. 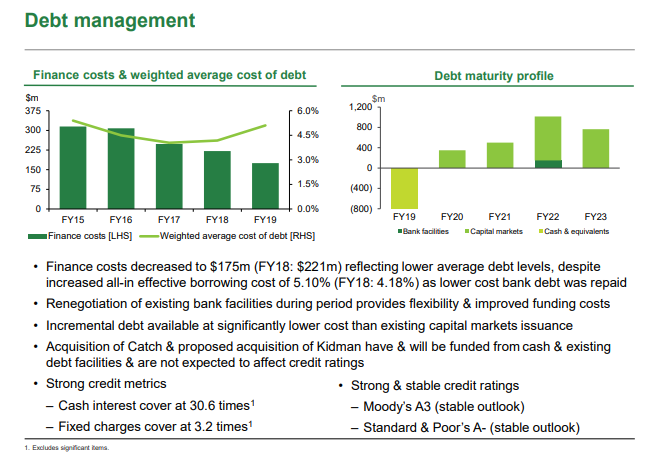 In FY 2020, the group has completed the acquisition of Catch Group Holdings, and Kidman Resources along with its 50 per cent interest in Covalent Lithium joint venture. These two businesses would further add revenue streams amid decreasing operating cash-flows due to portfolio repositioning, while the group had retained a 15 per cent stake in Coles.

In November 2019, during the Annual General Meeting 2019, it was noted that the portfolio repositioning depicts the group’s emphasis on shareholder returns, while the Coles demerger was the largest demerger transaction in the Australian corporate history.

WES intends to develop a lithium hydroxide plant near to its chemical operations in Western Australia. The Board of the group raised concerns over the corporate tax rate and labour conditions along with robust regulation, which would make the business environment competitive while attracting overseas investments.

It was also reported that the group wide sales results have depicted an improvement sequentially, and the businesses are delivering growth due to strong operational execution, category expansion and a better digital offering.

Also, the Christmas period and weather conditions would impact the yearly performance of the group, while the businesses of the group would face cost pressures due to costly new enterprise agreements, investments in digital and technology, and a lower Australian dollar impact on costs of goods sold.

In FY 2019, the group entered into contracts to develop two new automated ambient distribution centres as part of its Supply Chain Modernisation Program. It has also restructured its terms in the agreement with Viva Energy Limited, and now the group would only receive commissions on fuel sales.

In addition, the group had incorporated a joint venture with Australian Venue Co. Ltd (AVC) for its hotel and liquor business, and it would have rights to the economic benefits arising out of the retail liquor business while hotel business would be with AVC.

In November 2019, the group convened its Annual General Meeting, and it was noted that the domestic food & beverage market continues to grow while customer needs and the competition continue to ramp up as well.

The group intends to deliver sustainable earnings growth with attractive dividends over a long-term period, and it is committed to maintaining a prudent balance sheet, sustainable cash-flows and credit metrics.

In October 2019, the group reported first quarter results, delivering a 48th consecutive quarter of comparable Supermarkets sales along with growth in fuel volumes for the first time in four years.

In December 2019, the group convened its Extraordinary General Meeting and Annual General Meeting. The group was seeking shareholder approval for an internal restructuring to create Endeavour Group.

After demerging Endeavour Group from Woolworths, the Board believes that the company would be able to emphasise on evolving customer trends. The separate entities would command a market-leading position in their respective markets with separate balance sheets to capitalise on growth opportunities. 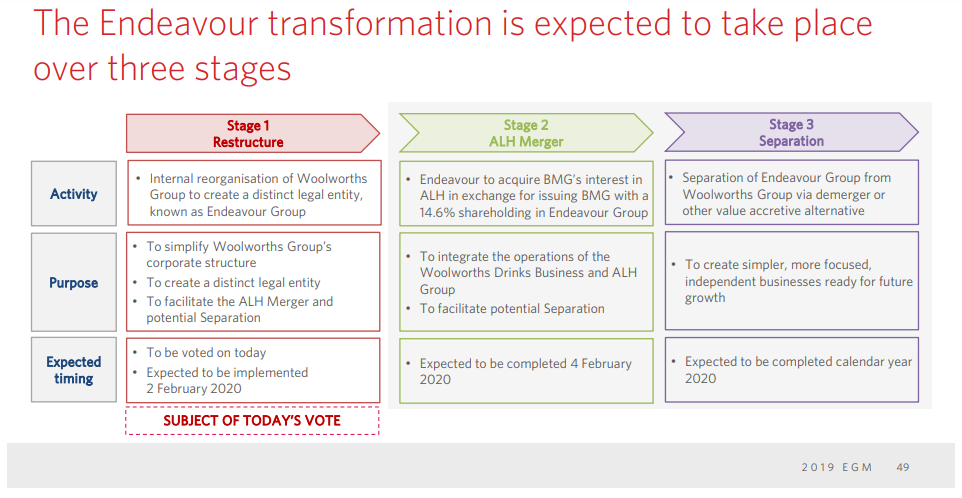 Also, the group intends to hold a 15 per cent stake in the demerged entity, and all resolutions were carried in the EGM and AGM. With stage 1 completed, the group is anticipated to complete stage 2 in February 2020, and this would see the merging of drinks business and ALH Group.

In addition, the group also reported that Peter Hearl would be taking over the role of Chairman in the proposed Endeavour Group. He had been associated with PepsiCo and YUM! Brands in the past.

In AGM 2019, it was noted that first quarter sales from continuing operations increased by 7.1 per cent over the same quarter last year. And, it was said that FY 20 had started with strong sales momentum across the group.

In Australian Food, the success of Lion King Ooshies, Discovery Garden, online sales and renewal program had delivered strong sales growth. And, the group was focusing to deliver the best possible Christmas and festive season.

Despite uncertainty in consumer trends, the group was contemplating to capitalise on opportunities that could deliver value to customers as well as shareholders.