Australia is looking at a potentially worsening pandemic situation with the resurgence in COVID-19 cases across its states. A fresh dose of infections has threatened Australian economic recovery, which following the nation’s reopening has followed an upward growth trajectory.

As on 24 June 2020, the country over the past week recorded an average of 22 cases each day, with Victoria recording majority of infection cases. At this point, reproduction number indicating the average number of people infected by a single person has escalated considerably to 2.5 while the Government believes the reproduction number should be below one.

Meanwhile, with a budding bleak state, military was called in for handling Melbourne outbreak. The move by the state government is to garner greater support as it aims to conduct more tests for better tackling the worsening scenario.

As Australia experienced heightened tension, the conditions in other parts of the globe also reverberated similar conundrum around the second wave of infection with the ameliorating situation taking a sharp U-turn in recent days. Discussing about the same, the director of the World Health Organization warned that the global pandemic scenario demonstrates “a new and dangerous phase” with a reportedly grim situation prevailing in the US and Brazil.

ALSO READ: Lessons from Spanish Flu Pandemic that Hit a Century Ago- History Repeating Itself?

The rise in the infection comes after Australia started witnessing green shoots and discussions for bullish phase grew. While businesses kickstarting their operations and gradual growth in consumer confidence in the past few weeks have started emanating optimism, potential alarming signal around the second wave of infection may pour cold water on nascent signs of improvement. The exacerbated pandemic situation in the country could primarily affect Australian path towards economic reboot.

Amidst the spike in COVID-19 cases and intensifying danger for the second wave, the authorities in Australia are re-evaluating enforcement of lockdown. Health Minister Jenny Mikakos on ABC Radio National Breakfast indicated that the Government would consider reintroducing “stay at home legal directions” if experts’ public health advice directs so in particular locations.

Victorian Government adopting an assertive approach on 21 June 2020 has extended the state emergency till 19 July 2020. Alarmed by the deterioration condition, NSW Premier Gladys Berejiklian has asked all tourism organisations to not interact with Melbourne citizens after NSW opened the ski season.

Other states are adopting more conservative approaches to distance themselves from this new spike in the cases. South Australia plans to keep the borders remained shut if conditions in Victoria does not improve. The state government would send extra police for ensuring strict border controls at SA-Victoria borders. Meanwhile, Western Australia, which is poised to enter its Phase 4 on 27 June 2020 with easing in COVID-19 restrictions has not indicated any date for opening the interstate border.

The surge in cases which is calling for strict interstate measures has further restricted overseas travel prospects. Health Minister Greg Hunt indicated that Australian international borders would remain shut for a considerable amount of time. However, Australia has planned for bringing its international students back in July. The students would undergo a coronavirus test and quarantined for 14 days before they resume their studies.

The Trans-Tasman Bubble which was previously sending positive hopes to the Australian and New Zealand’s tour operators has received a setback with the spike in cases in Australia. Meanwhile, New Zealand, which was declared coronavirus-free earlier, has registered many new cases with the return of New Zealanders from overseas, sending an alert signal to health authorities.

The extension in restriction for both the state and international borders in Australia could impact the trade and economic activities, deepening the trenches for the economy to recover.

The Government seemed to be scrambling to improve health scenario as it plans for an effective response towards the worsening situation. The growing fear concerning the second wave of infection has further intensified conundrum around the Australian economy which currently seems to be faring well in the international context.

Australia in the face of the pandemic has maintained a stable outlook for government finances as affirmed by Moody’s Investors Service, becoming one of the ten countries to preserve its AAA credit rating. The rating agency indicated that Australia’s AAA credit rating demonstrates the robustness of the economy and good governance that would drive strength against the pandemic.

Meanwhile, the International Monetary Fund warned that it would affect many economies deeper and longer than expected. However, Australia, along with Korea, is poised better than its peers to suffer a lower downturn, as indicated by OECD. The better health scenario in Australia compared to other nations remains a significant cause of resilience. 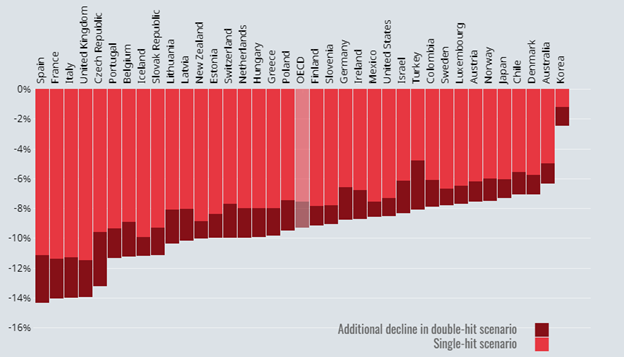 However, Qantas’ laying off 6000 employees and standing down another 15,000 flags the severity of the economic shock that the country is yet to register following spike in cases. When questioned about job cuts by Qantas, Prime Minister Scott Morrison highlighted it as an “obvious impact” as the company is not able to carry out its business operations.

Mr Morrison on 25 June 2020 called the outbreak in Victoria that recorded 33 new cases on a single day “internationally as a modest level” while stating that COVID-19 impacts would be more evident and prolonged in many parts of the economy.

Conundrum around the second Wave of Infection

The surging fear of the second wave of infection seems to threaten to derail the Australian economy. Proliferating concerns with the worsened situation impacted investor’s sentiments on the stock market front as S&P/ASX 200 index plunged by 148 points on 25 June 2020. Meanwhile, similar apprehensions around further outbreak could also affect consumer sentiments and the pace of economic recovery.

OECD indicated high vulnerability to the infection as economic restrictions begin to ease fostering economic recovery. While the economic impact of the strict and prolonged lockdown is expected to dip Australian GDP by 5.0%, the second wave of coronavirus infection could lead to the anticipated plunge of 6.3%. Meanwhile, the projection for unemployment statistics rather paints a grim picture for Australian economic revival.

OECD indicates that Australian unemployment rate without the second wave of infection would hit 7.4% in 2020, followed by a further rise to 7.6% in 2021. Moreover, in the case of the second wave of infection, the grim situation could even worsen, generating largescale financial woes. As a response to the ongoing COVID-19 scenario, OECD already flagged the need for income support by the Government for bolstering the economy in times of crisis.