Positive Results for IT Stocks - CAT, IRI, DUB and OTW

Financial reports of a company are important for investors as well as creditors, as they highlight the condition of the company. Based on the results, both creditors and investors decide whether investing in companies is safe or not. Moreover, it helps them in understanding the scope of profit.

Catapult Group International Ltd, Integrated Research Limited and Over the Wire Holdings Limited have recently released their annual results, while Dubber Corporation Limited has updated the market with its fourth-quarter results. Letâs take a look at the results of these companies.

Catapult Group International Ltd (ASX: CAT) is an IT sector play engaged in developing technology that helps athletes and teams to improve their performance.

On 22 August 2019, the company released its full-year results for the period ended 30 June 2019. CAT reported its first positive EBITDA of $4.1 million, representing an improvement of $6 million over FY18. The annual recurring revenue increased by 24% to $66.1 million, while revenue of the group grew by 24% to $95.4 million in the reported year. The operating expenses declined from 14% to 9% on a pro-forma basis. The company incurred a net loss after tax of $12.3 million, representing a year-on-year improvement of 29%. As at 16 August 2019, Catapult Group had cash and cash equivalents of $21.5 million, while at the end of FY2019, its cash balance stood at $11.7 million. 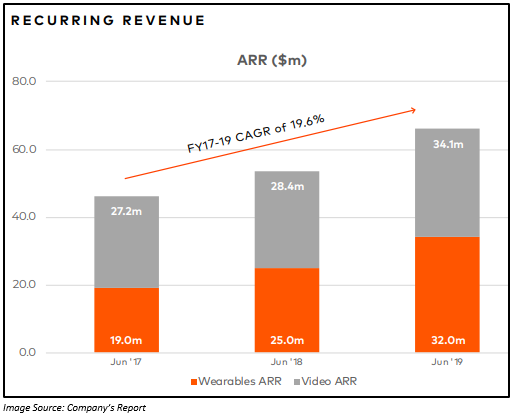 During the period, the company added a record number of new teams to its client base. Its customer base grew by more than 1,100 new teams to 2,970 teams. The Americas region remained the largest market for the company, with CAT passing 1,000 teams in North America, which comprise of 11 of its top 15 clients by revenue. This region delivered a strong growth in revenue, where the revenue increased by 19% to $65 million. The North America region contributes 69% of the total revenue of the company. The EMEA region revenue increased by 44% to $20 million, while revenue for the APAC region and the Australia region grew by 40% and 20%, respectively. 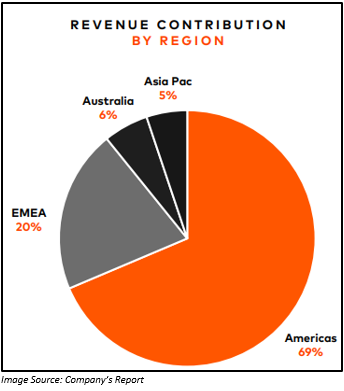 The company also reported strong growth across all its products. Revenue from its Elite wearables increased by 33% to $45.3 million due to an all-time record volume of units sold (total unit sales - 15.7k). Growth in the units sold was also supported by a decrease in churn rate on subscription units. 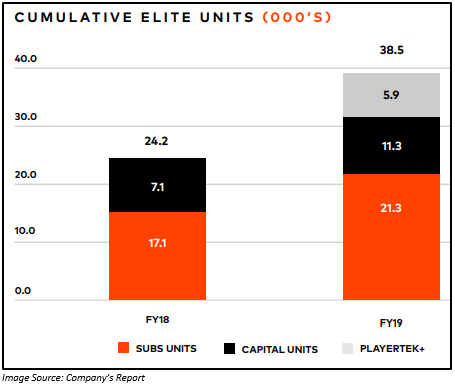 Through the launch of PlayerTek+ in FY2019, the company was able to address the lower segments of the elite market. The large Elite video business of the company continued to grow and has started moving towards global expansion. Revenue from elite video increased by 14% to $44.8 million.

In the first half of FY2019, the company repaid a loan of $3.3 million. It made an investment of $7 million in the consumer business. The balance sheet of CAT witnessed a decline in net assets due to a fall in total assets. Total shareholdersâ equity for FY2019 was $120.683 million.

The Board, in FY2020 and beyond, expects to register strong growth in revenue, with the emerging scalability further aiding the company in reducing its operating expenses. The company remains dedicated to subscription sales and ARR growth with high quality, high margin revenue being a strong value-creator for the company. Key drivers that would continue to support the companyâs growth are greenfield sales to new teams, upselling of additional capacity to the existing customer base and cross-selling of additional products.

For FY2019, the companyâs revenue exceeded $100 million, while net profit after tax for the period grew by 14% year-on-year to $21.9 million, representing record results with milestone achievements in IRIâs history. The results of FY2019 are towards the upper end of the guidance that was provided by the company to ASX on 15 July 2019. There was also an increase in new licence sales of 19% to $62.8 million. Revenue through payments went up by 92% to $16 million, while revenue from infrastructure, which comprises of HP-Nonstop, increased by 28% to $26.3 million. However, there was a decline in revenue from Unified Communications and Contact Centre of 7% to $51 million.

More than 95% of the revenue of IRI was generated from outside Australia. 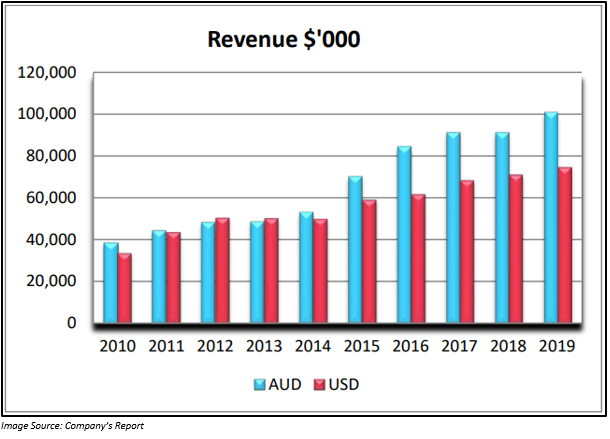 Sales in FY2019 were reported from its major brands like Airbus, Barclaycard, CenturyLink, DXC Technology, IAG, Target, Walgreens, Mastercard, Visa and Westpac. Total dividend for FY19 stands at 7.25 cents per share, including an interim dividend of 3.75 cents per share.

Dubber Corporation Limited (ASX: DUB), a cloud-based software technology company, on 31 July 2019 released its quarterly results for the period ended 30 June 2019 and updated on the growth in key performance indicators.

In April 2019, the company raised $22 million in capital, which supported DUB in scaling its business resources in line with growth opportunities. There were significant developments during the June 2019 quarter aimed at meeting increasing demand for its services. During the period, main focus of the company was on scaling its resources, particularly key personnel so that it can capitalise on the below mentioned commercial opportunities.

DUB revenue in the June 2019 quarter increased by 29% to $2.03 million. The annual operating revenue grew by 269% to $5.54 million. For the entire FY2019, number of contracted service provider partnerships of the company went up from 36 to reach 106. Three of the new partnerships were reached in Q4 FY2019. 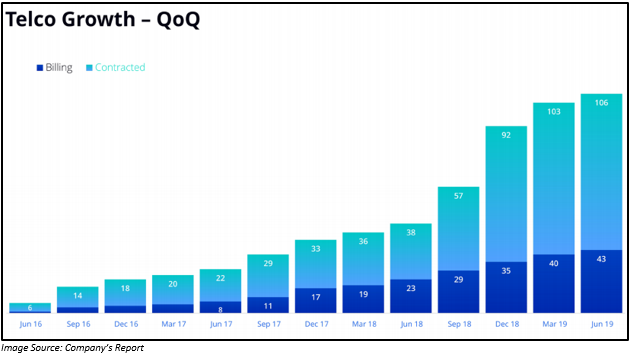 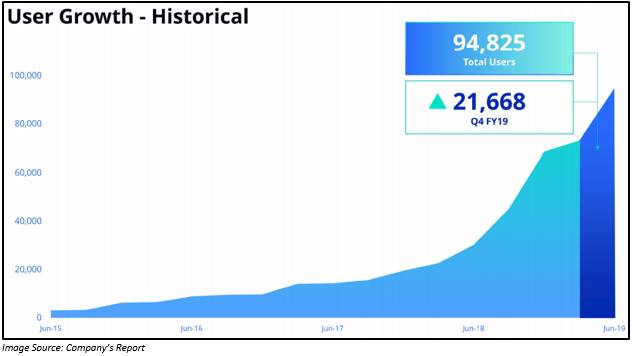 Dubberâs service went live with Spark New Zealand and Bell Canada. Moreover, the company added 14 new members to its team including the below mentioned senior appointments:

Over the Wire Holdings Limited

Over the Wire Holdings Limited (ASX: OTW), a provider of telecommunications, cloud and IT solutions to business clients, on 15 August 2019, released its annual results for the period ended 30 June 2019.

The company during the period focused on its organic growth, which it achieved via geographical expansion as well as market penetration followed by quality acquisitions. The revenue of the business was the outcome of the demand from customers across its product lines Data Networks, Voice, Cloud / Managed Services as well as co-location.

The companyâs business is moving as per its strategy. It would continue to generate positive cash flow and strengthen its balance sheet. The company has also placed itself well to deliver organic growth and look for additional accretive acquisitions. The company is confident that it would be able to register robust growth in FY2020 as well as provide sustainable profit growth for shareholders.