The ongoing global risks have taken a toll on economic developments across countries. Lately, there has been a drop in consumer confidence. There are predictions for slow growth in the international economy, while the already troubling coronavirus continues to hinder the Chinese as well as the global economy.

It was recently brought to the public knowledge that the seasonally adjusted unemployment rate of Australia dipped by 0.1 per cent to 5.1 per cent in December 2019. The underemployment rate was steady at 8.3 per cent, and employment rose by 28,900 people to 12,981,600 people. The encouraging data lowered the likelihood of a rate cut in February, in line with which, RBA held the interest rate at 0.75% in yesterday’s meeting.

For New Zealand as well the unemployment rate has been reported to fall slightly, while wage growth has remained close to its best in a decade. This has reduced the market expectation of NZ rate cut expected in next week meeting.

However, the number of jobs being created has slowed down in the month of December. 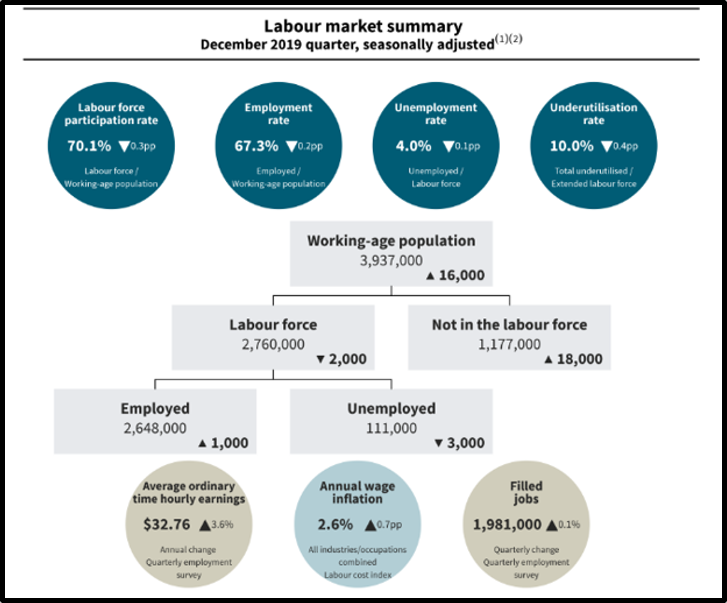 On 05 February 2020, the New Zealand Government’s Stats NZ reported that the seasonally adjusted unemployment rate was down from 4.1 per cent in September 2019 quarter to reach 4.0 per cent in the December 2019 quarter. The decrease in the December quarter’s unemployment rate indicated 3,000 fewer unemployed people, which was propelled entirely by 3,000 fewer unemployed women, and

However, during the December 2019 quarter, the seasonally adjusted employment rate dropped to 67.3 per cent, down from 67.5 per cent last quarter.

Upon classification based on sex, the employment rate for men during the December quarter dropped a little to 72.2 per cent from 72.3 per cent in the previous quarter, and for women, the same fell to 62.5 per cent, down from 63.0 per cent in the last quarter.

It also indicated the number of employed people, which was up 1,000 and increased at a slower rate than the working-age population, which was up by 16,000.

As measured by the Quarterly Employment Survey (QES), filled jobs increased 0.9 per cent (unadjusted), which translates to 17,200 new jobs on an annual basis comprising the growth of 11,900 jobs held by men, and the increase of 5,200 jobs for women.

Also, there was a rise in Labour Cost Index (LCI) salary and wage rates by 2.6 per cent in the December 2019 quarter representing the biggest rise since the June 2009 quarter where it rose by 2.8 per cent.

As measured in the Quarterly Employment Survey (QES),

As stated by Stats NZ, public sector wage growth, which increased 3.3 per cent in the year to the December 2019 quarter, was shaped by the collective agreements across industries including the main drivers such as health care and social assistance; public administration and safety; and education and training, reflecting the pay settlements for nurses, police, and teachers, respectively.

The LCI salary and wage rates gauge the changes in wages for a fixed quantity and quality of labour which entails the elimination of adjustments in pay rates due to promotions or the performance of employees in the index.

The increase in pay in the last LCI was led by the growth in ~61 per cent of wages.

With the highest percentage of wages that have witnessed expansion since September 2008, the wage growth across the LCI is currently acknowledged, with 61 per cent of wages showing pay increases compared to last year.

More minimum wage effects are expected in the LCI as it continues to rise in annual increments and is expected to attain $20 per hour by 2021.

Another significant event for the annual increase in private sector wages was the increase in minimum wage during April 2019, especially for the retail trade and accommodation industries.

In addition to the above, the Underutilisation rate fell to 10.0 per cent in the December 2019 quarter, down from 10.4 per cent last quarter, and is the lowest since reaching an 11-year low of 9.9 per cent in June 2008 quarter.

Underutilisation offers a broader gauge of untouched capacity in the labour market of New Zealand, and the following are included as the underutilised people in New Zealand who:

For the December 2019 quarter, the number of underutilised people fell to 285,000, representing a fall of 11,000. The decline was led completely by 12,000 fewer women who were underutilised.

Moreover, the underutilisation rates, for both genders, have been closest to each other since December 2011.