In 2016, Australia legalised cannabis for medicinal and scientific purposes under the Narcotic Drugs Amendment Act 2016. The amendment provided relief to the cannabis sector and enabled the prospective producers to apply for the necessary licenses to grow the crop legally. In January 2018, the government made another breakthrough by uplifting the barriers to export cannabis in the overseas markets.

Therapeutic Goods Administration (TGA) is the regulatory body designated for the supervision of medicinal cannabis industry in Australia. According to the data released by TGA on the number of licenses granted since June 2018 for the medicinal purpose was over 8,500. Besides, 1,576 licenses were granted in the month of June 2019, under Special Access Scheme (SAS).

Medicinal Cannabis is a high-quality standardised product derived from crude or raw cannabis. As a practice, doctors do not prescribe raw cannabis as the potency of the drug, for an individual case is not known. Pharmaceutical operations modify the components of cannabis to make it more useful for therapeutic purposes, and in the meanwhile, minimise the side effects of it as well.

Mr Greg Hunt, Minister of Health, Australia stated that the government applies stringent controls to prevent diversion of the products. Also, an online application system was developed by the government, which has streamlined the process of seeking approval for prescribers. Further, the online system is being used by all states and territories except for Tasmania, and it takes two working days to get the approval, which requires information from the applicants.

He also said that access to unapproved products depends upon the conditions being satisfied under Therapeutic Goods Order 93, which encourages to maintain the quality of the product. In addition, medical practitioners are required to report the adverse events caused by the use of unapproved products.

According to media reports, New Zealand is also amid developments for a referendum next year to legalise the cannabis for personal use. The recreational use of cannabis opens up multiple additional revenue streams for the companies involved in cannabis derived products.

The legalisation of cannabis depicts an upside potential for the revenues of the government. These revenues include licensing fees, indirect taxes levied of goods. According to media reports, the ACT legislative assembly intends to amend the âDrug of Dependence Act, 1989â, which would eliminate the drug from the list of a prohibited substance, decriminalise possession of up to 50 grams while allowing the cultivation at home for up to four plants.

Below is an indicative but not exhaustive list of companies with an exposure to the medicinal cannabis trading on ASX, as on 18 July 2019: 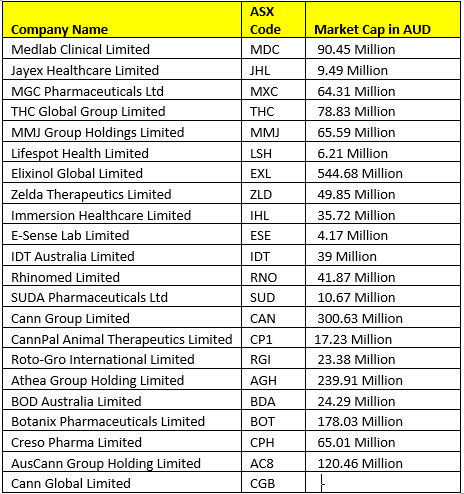 Let us now look at a few cannabis related stocks: 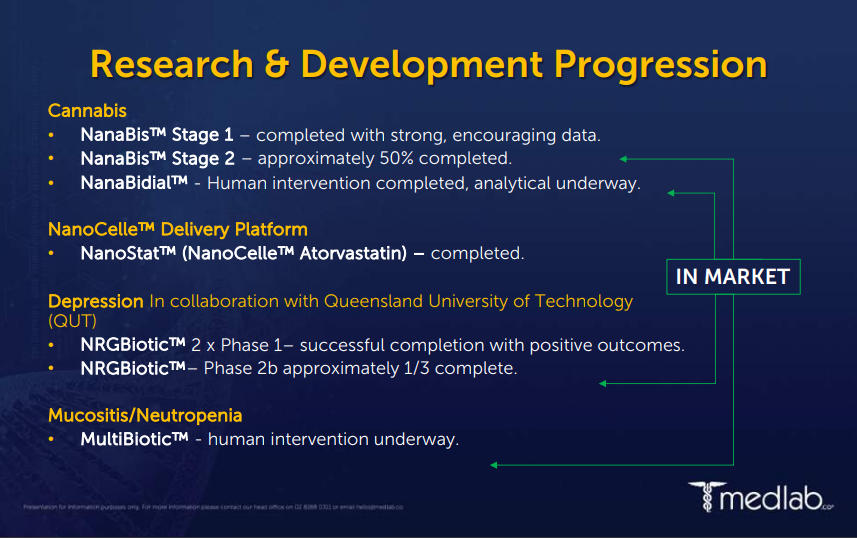 Recently, on 4 July 2019, the company had released its operations update for the June quarter. Accordingly, the companyâs revenues were up by around 135% over the same period last year, and the revenues were over $3 million excluding R&D incentive and after discounts.

Medicinal Cannabis: As per the release, the company has TGA licenses for possession, supply, research, import & export of cannabis. Also, Medlab received the Human Ethics Approval for second NanaBisâ ¢ trial, which would be undertaken at Royal North Shore Hospital, and it would provide necessary data along with support for global commercialisation of NanaBisâ ¢. Besides, NanaBisâ ¢ and NanaBidialâ ¢ are the two patented cannabis medicines.

Commercialisation: Reportedly, Medlab is pursuing regulatory pathways with European Medicine Agency, Therapeutic Goods Association (TGA) in Australia and the Food and Drug Administration (FDA) in the USA. Also, the company has been focusing on the TGA Special Access Scheme (SAS), which allows Australian patients to access medicinal cannabis products. Besides, the company has dedicated Medical Scientific Liaison team engaged with healthcare specialists and approved health professionals to promote the access of Medlab products through the SAS scheme.

Further, the company has been making steps in education of cannabis; thus, in April, an agreement was signed with Chronic Pain Australia, which supports over 35k patients with chronic pain each month. Moreover, an agreement was signed with Thai listed company, Mega Lifesciences Public Company Limited to distribute NanaBisâ ¢ in parts of South Africa in May. Furthermore, MDC and Pharmascience Inc. signed an agreement for the development and distribution of NanaBisâ ¢. Importantly, the indication for NanaBisâ ¢ is cancer pain; also, under the SAS, the company also promoted approved uses of cannabis as below: 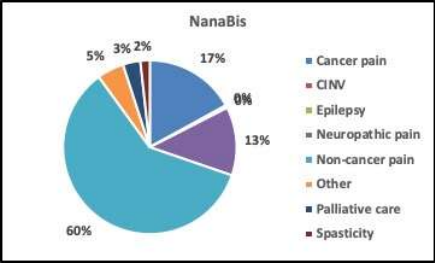 Bod Australia Limited (ASX: BDA) is engaged in the development, distribution and marketing of health products based on cannabis and hemp. The company has a widespread distribution network of pharmacy, online, retail and speciality health food store.

Reportedly, the company would be provided with the distribution capabilities of BHC, and its partner company CDA. Also, CDA has several clinics and established patients bases in the country, and since 2018, CDA has over 1,800 medical cannabis prescriptions. Besides, CDA provides educational services, and it is looking forward to expanding the business to New Zealand. Further, CDA had approved patients for MediCabilisâ ¢ via physical clinics and telehealth services.

Bod Australia expects strong demand from the patients with increased prescription in the coming months, and these sales would support the revenue growth for the company. It was reported that MediCabilisâ ¢ is associated with premium quality, reliability, consistency and safety data, which had been influential while seeking the agreement. 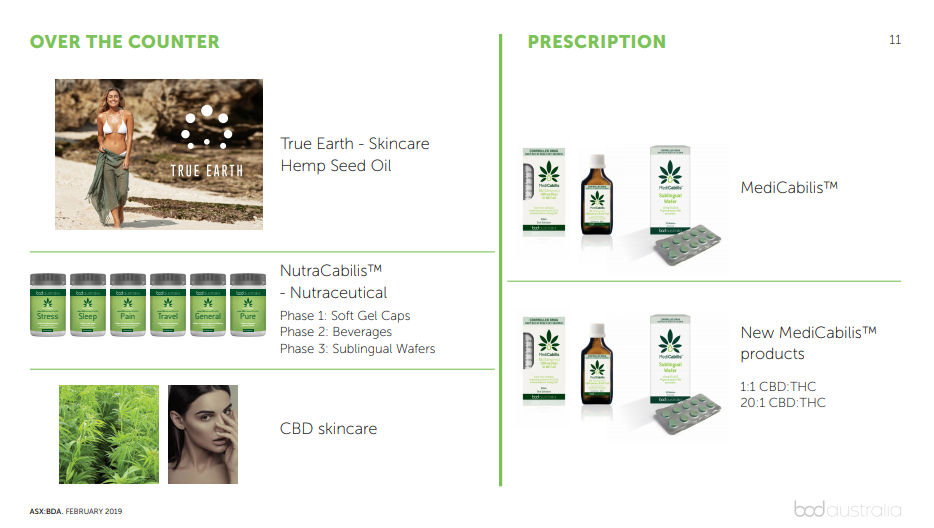 As per the release, the company would access CDAâs network of medical specialists and physicians through its medicinal cannabis education program, which allows patients to access the companyâs superior range of clinically tested products. Lastly, the collaboration with BHC would underpin the development of non-THC cannabis products, which would enable the company to meet the growing demand from patients and physicians.

Creso Pharma Limited is engaged in producing cannabis derived products for both people and animals, backed by pharmaceutical expertise. In Australia, it was the first company to import cannabis. Few of its products include anibidiolÂ® and cannaQIXÂ®.

Recently, on 2 July 2019, Creso Pharma announced that sales had commenced for the cannabis from its Mernova Medical from Nova Scotia. Accordingly, the first sale is a part of multiyear sale agreements executed by the company, and the first sales depict a revenue of C$150k which could rise to C$5 million by the end of this year. Also, the receipt of license in February 2019 enabled the company to initiate cultivation for commercial and B2B sales.

Reportedly, the company intends to tap the demand for high-quality cannabis products, and produce two specific strains for the wholesale clients, and up to five additional strains from the retail customers, pending sales license. Also, the company anticipates producing approximately 700k grams of dried flower at Mernova by the end of this year. Besides, Creso plans to increase the capacity from the facility to ~4,000 kgs of cannabis annually.

Mernova Update: As per the release, the product from the Mernova facility has been of high-quality, and the companyâs recent harvest bagged 22.6 per cent and 23.2 per cent of THC levels. Also, the facility is a 24k square foot designed to accommodate two-tier grow room approach. Currently, only one tier is operational, and the second tier would increase the capacity of the footprint by 60%. Further, the company has planned to capitalise on additional capacity such as lighting power supply upgrade. 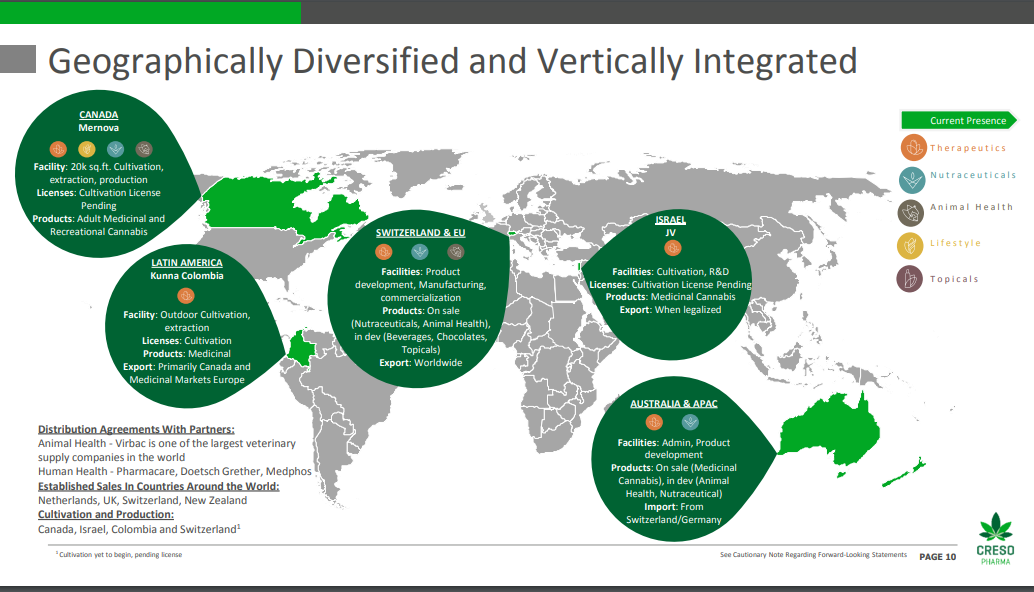 Acquisition: Currently, Creso Pharma is amid an acquisition by PharmaCielo Limited (TSXV: PCLO), and debt repayment is a condition precedent to the acquisition. On 3 July 2019, CPH announced that the balance of secured loans was reduced by $5,15,000 via the issue and subsequent conversion of convertible notes.

Reportedly, the secured debt had been raised in April through a syndicate alongside PharmaCielo. Subsequently, the shareholders approved the issue of up to 107 convertible notes to replace 5,35,000 in secured loans. Also, post-receiving the shareholder approval, the company made the following offer to the shareholders: