Stocks that witnessed a rise in the market price

In today’s trading session, the benchmark index S&P ASX 200 index was up by 0.59% and closed at 6,687.4. Majority of the sector indices also closed in the green today. Let us have a look at six stocks have generated positive movement in the prices. Resolute Mining, St. Barbsara and Regis Resources generated returns of more than 5%. Other stocks, namely Transurban Group, Newcrest Mining and CSL Limited, depicted upward movements below 3%. Below is a snapshot of the performance of each of the companies. Apart from the above, three stock, namely Viva Energy Group, Webjet Limited and Qantas Airways witnessed a fall in prices during the trading session. While Webjet and Qantas witnessed a decline below 4%, Viva Energy’s stock went down at a rate of 8.036%. Below are the relevant details on the performance of the companies.

Transurban Group (ASX: TCL) develops, owns and operates toll roads and intelligent transport systems. On 21st May 2019, the company updated the market about the payment of an ordinary dividend of 30 cents per stapled security for the six months ended 30 June 2019.

During the quarter ended March 2019, the Average Daily Traffic increased by 2.3% with growth achieved across all markets. The company witnessed continued progress with new development projects. Melbourne witnessed the highest increase in ADT by 3.1%, followed by North America at 2.9%, Sydney at 2.1% and Brisbane at 1.1%. 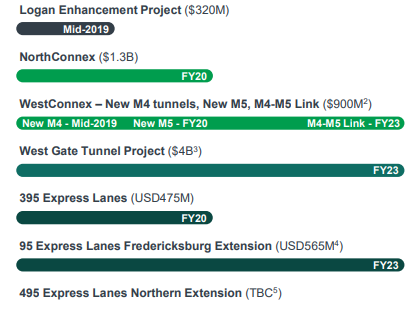 Newcrest Mining Limited (ASX: NCM) engages in the exploration, mine development, sale of gold and gold and copper concentrate. On 23rd May 2019, the company announced the issuance of 17,887 Performance Rights for nil consideration.

In the quarter ended March 2019, the gold production was reported at 623koz, down 5% on the previous quarter. Copper production for the period totalled 25kt, down 6% on the previous quarter. Year-to-date copper and gold production increased by 33% and 7%, respectively, as compared to the prior year. The period saw acquisition of a 70% stake in Red Chris mine from Imperial Metals Corporation with Brownfields and Greenfields exploration activities.

Resolute Mining Limited (ASX: RSG) engages in the gold mining and exploration of minerals. On 20th June 2019, the company updated investors that its shares are now listed on the London Stock Exchange’s (LSE) Main Market.

For the March quarter, the company reported record production of 84,552oz from Syama site, up 50% on the prior quarter, which resulted in a material reduction in All-In-Sustaining Costs. The performance was also marked by strong operating performance and cash flow generation. The company is on track to achieve the production guidance for FY19 of 300,000 ounces of gold at an All-In Sustaining Cost of $1,280/oz. 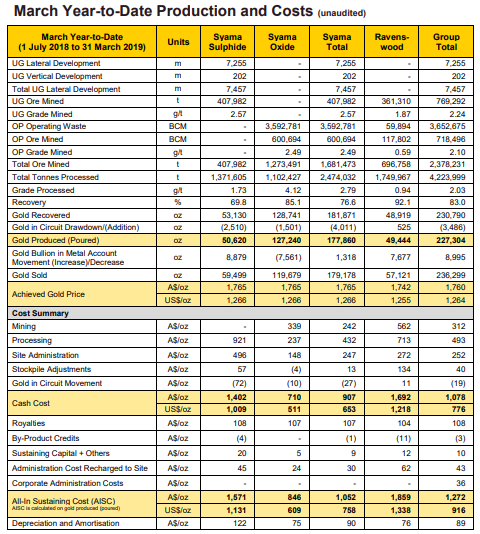 St Barbara Limited (ASX: SBM) is primarily engaged in the mining and sale of gold. On 17th June 2019, the company updated the market that it intends to acquire Atlantic Gold Corporation for $768 million.

Total gold production guidance for the financial year 2019 is expected to be around 355,000 ounces. 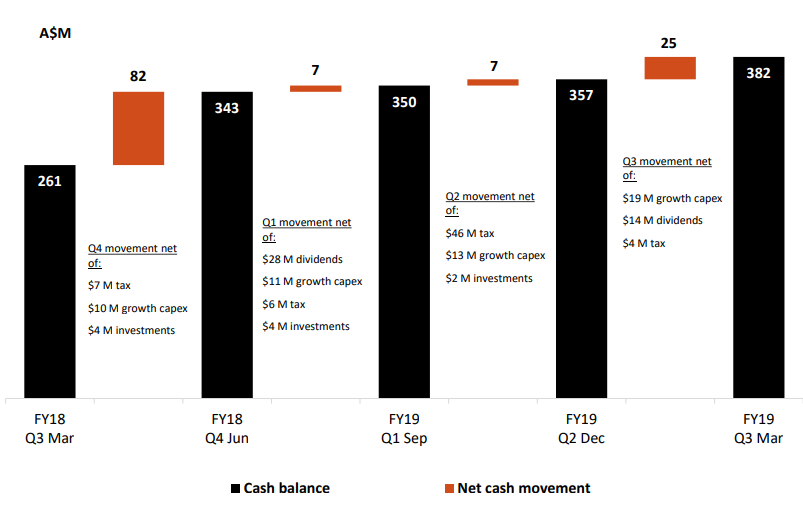 Regis Resources Limited (ASX: RRL) is engaged in the production of gold and exploration and evaluation of gold projects. In May 2019, the company announced the issuance of 42,797 ordinary fully paid shares for a price of $2.70 per share.

For the March quarter, the gold production was consistent at 91,087 ounces in line with the previous quarter. Year-to-date production was at the top end of the annual guidance totalling 272,453 ounces. Cash flow from operations during the period amounted to $89.3 million. FY19 AISC guidance is expected to be at the bottom end of $985-1055/oz and production guidance is expected to be in the middle to top range of 340,000-370,000 oz. 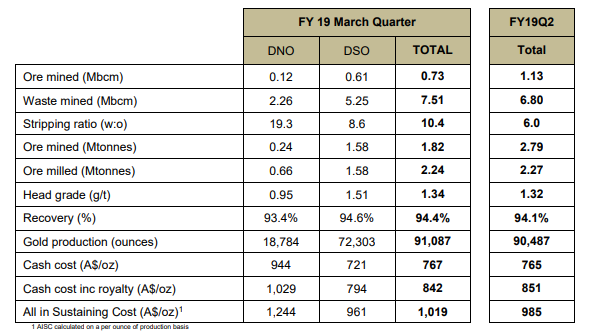 Stocks that witnessed fall in the market price

Viva Energy Group Limited (ASX: VEA) is engaged in the sale of fuel and speciality products and also undertakes manufacturing activities at the Geelong Oil Refinery. On 14th June 2019, the company informed that the voting power of a substantial shareholder, Perpetual Limited reduced from 11.06% to 10.02%.

In April 2019, the company updated investors on its refining margin for the month. Geelong Refining Margin was US$7.8 per barrel with the crude intake of 3.6 million barrels. During FY18, the sales totalled 14,045 million litres, broadly in line with the forecast. Underlying EBITDA amounted to $608.8 million from the retail segment, which was also in line with the guidance of $607.6 million. Total Underlying EBITDA amounted to $528.9 million. The company also declared a final dividend of 4.8 cps for the half year ended 31st December 2018. 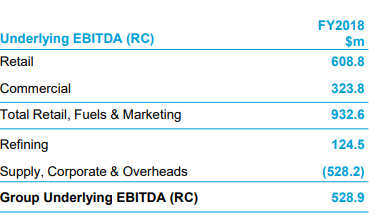 Webjet Limited (ASX: WEB) is engaged in online sales of travel products, including flights and hotel rooms. The company recently announced that the Challenger Limited became a substantial shareholder with 5.04% voting power. 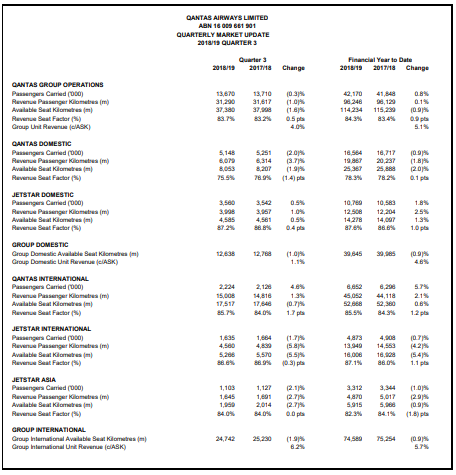 Is AMP to be Penalised?

Meanwhile, the Australian Securities and Investments Commission (ASIC) proposed to impose a fine of between $24 million and $36 million on AMP Limited (ASX: AMP) , a financial services company in Australia and New Zealand, due to the contravention of financial services laws. As per ASIC, there was a breach in 120 cases, but AMP stated that it had violated the law only twice and was therefore liable to pay a fine of $1.2 million to $1.5 million. The case pertains to insurance ‘re-writing’ or ‘churning’, wherein customers are advised to cancel their life insurance and take out new cover, exposing them to underwriting risks. After referring to internal emails, it was inferred that AMP was aware of the gravity of conduct but failed to deal with the issue. The size of the penalty is now dependent on the number of breaches that AMP has committed.

AMP closed the day flat at A$2.070, with over 20 million shares changing hands. The market capitalisation of the company is A$6.1 billion.