As per FNZ, the SS&C Process Deed was entered into prematurely without facilitating a proper auction process which is why it has asked the panel to intervene in this matter.

In its application to the panel, FNZ has requested the panel to cancel SS&C Process Deed.

GBST conducted a formal process by way of a confidential tender process, inviting selected parties to submit non-binding indicative proposals in connection with a 100% acquisition of GBST. The GBST Tender Process Participants were requested to address in their proposals a range of key criteria including:

? offer price to acquire 100% of GBST via a board recommended scheme of arrangement;

? importantly, the quantum and terms of an exclusivity deposit fee that would be payable in the event that the party who was provided with due diligence information subsequently, withdrew its non-binding proposal other than due to a higher competing offer.

The GBST Tender Process Participants were informed that the GBST Board would consider proposals received and on the basis of those proposals would provide one party with a limited period of exclusive due diligence access in accordance with the terms of the Process and Exclusivity Deed, in order to enable that party to convert its non-binding proposal to a binding proposal.

Later on 3rd July 2019, it was announced that SS&C had increased its non-binding indicative proposal to $3.60 and the SS&C Process Deed had been amended by reducing the exclusivity period to three weeks. Following this, FNZ also revised its proposal to $3.65 per share subject however this revised proposal was subject to receiving the full terms of the SS&C 2/2 Process Deed.

FNZ’s request was refused by GBST which prompted FNZ to seeks interim orders from the Panel to suspend the operation of the SS&C Process Deed and restrain any further due diligence by SS&C.

The highlights of first half results for FY19: 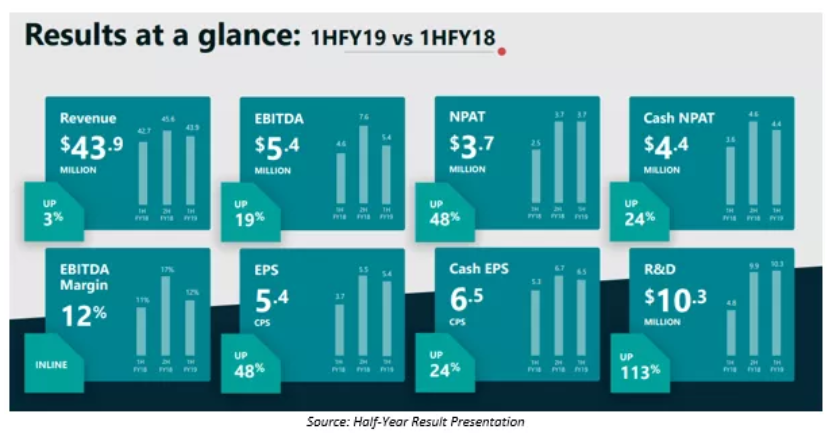 The company recently announced that its Operating EBITDA before Strategic R&D for the year to June 30, 2019 is expected to be around A$20 million, which is above the previous guidance, and reflects greater certainty around client take-up and an ongoing focus on delivering our transformation.

On 4th June 2019, GBST Holdings Limited announced that it has signed a 10-year contract to deliver a major back-office transformation programme for Canada Life UK, which provides insurance and wealth management products and services. It is expected that this agreement will contribute a minimum of A$50 million in revenue over the next 10 years.