Since online retailing has gathered momentum, conventional retailers across the globe have been facing damaging consequences. This coupled with subdued wage growth, growing competition, increasing fixed costs, and below trending economic growth, on a broader scale, has influenced the fundamentals for retailers.

Since 2017, the list of fashion retailers who had filed for bankruptcies is quite long, and some iconic and historic brands have been casualties as well, while the media doesn’t necessarily talk about consequences faced by small business owners who run shops outside of the metro cities.

While the list include more names that have been casualties in the last decade, we shall now focus on the domestic landscape of fashion retailers, which has witnessed drastic disruptions during the decade.

In January 2019, the news was around the make-up and beauty brand Napoleon Perdis with a history of 24 years. In April last year, it was reported that the creditors of the retailer had approved a $1.6 million deal, which would see around 28 stores to remain open, said media.

In February 2019, Ed Harry, a speciality menswear retailer, entered into voluntary administration. It failed to find buyers as the interest from the market was very limited. And, this casualty is reported to have impacted around a staff of 500 across its approx. 86 stores, said media.

In May, the shoe retailer became the victim of the subdued retail industry. It was noted that the increasing cheap Chinese manufacturers and the failure of the company to gain customer traction had led to such fate.

The retailer used had an offering of customised shoes through its website, and it had prayed for $3 million in funding to revamp its business model.

In July, the UK departmental store chain announced its plans to close their only store in Australian market in Melbourne. In 2017, the retailer had entered Australia with not very optimistic thoughts, considering the disruptive trends faced by the industry on a broader scale.

In September, the British fashion retailer noted to shut the Australian operations. Its administration stated that they are undertaking a controlled wind-down of its concessional stores and normal stores.

Meanwhile, the parent company of the Australian business was acquired by the online retailing giant Boohoo for the deal closed £18 million. By the close, the retailer was offering discounts up to 75 per cent.

Since last 166 years, Dimmeys has a presence in the Australian retail market, and in November 2019, the discount retailer announced its plans to close stores, which devasted many shoppers.

It used to serve small towns with a majority in Victoria, and others scattered around the country. Presently, its stores are conducting closing down sale, according to its website.

The most recent crash in the fashion retail segment is Bardot, which announced seeking a voluntary administration in November 2019. It said, increasing competition and challenging domestic market has led to this fate, while Bardot operated a few over 70 stores domestically.

While the business had gained traction in the overseas markets, the domestic environment has not been encouraging for the fashion retailer in an increasing discount driven market.

During the year, fashion retailer reported to wind up its all business operations in Australia and New Zealand. It was said that the business intended to move into more profitable regions.

In November 2018, the menswear retailer announced its plan to close stores, after the administrators failed to find buyers. The brand had a presence in the country for over 70 years, and its collapse was due to the rising competition, changing consumer taste, along with rising fixed costs.

In December, the retailer’s Australian business entered into voluntary administration for the second time in two years. Its fate was beleaguered with rising fixed costs, increasing competitions, and subdued retail sentiment.

As a result, the capital requirements needed to grow and reviving the business became increasingly bleak. It had entered the Aussie market in 1971.

What did we learn from this?

Weakening fundamentals for the fashion retailers in Australia, has not only pushed domestic names out of business, but the rage was felt by outside retailers that entered the market in a bid to capture market share.

According to Australia Post, over 73% of Australian households shopped online in 2018, 10 per cent of the total retail spending came through online. They splashed $27.5 billion in online shopping, depicting an increase of 24.4 per cent. 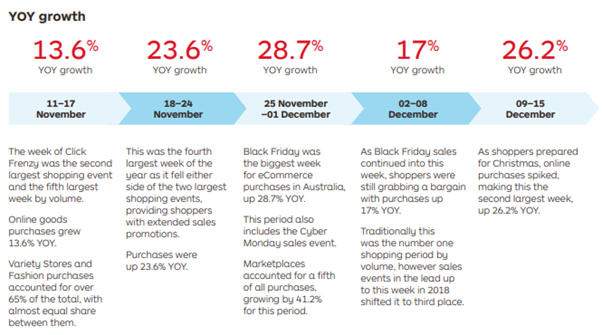 The rage of online tsunami started depicting its ramifications after some 13-14 years of the dotcom bubble. Since online retailing has expanded to almost every item, the need for conventional retailers to open substantial stores in this decade appears very bleak.

Opening new stores used to be on the agenda for every retailer, while investing the same money to optimise the omni-channel retailing experience for the customers appears more convincing presently.

Meanwhile, the ‘easy money’ that had been flowing into newly ventured start-ups, especially in the e-commerce space, gave these start-ups a propensity to wage a price war against the conventional players while incurring losses.

However, the large and financially sound traditional retailers have felt the damage too, but the casualties in the large companies appear to be muted. Whereas, it has resulted in margin erosion as they try to match the price.

“Today’s shopper has much more information than he had two-decade back. Now, he can scroll on his phone to check the best prices available for the desired product. And, he can do this while roaming in stores and comparing prices of products available at stores with a price on offer at online channels. Moreover, consumers have turned astute immensely.”

While consumers have turned astute increasingly, this decade we would see retailers turning astute and efficient.

The pace of innovation in retailing experience is likely to be much-faster than ever, as retailers try to optimise their business models in a bid to optimise costs and deliver shareholder value.

The applications of artificial intelligence and robotics would drive efficiency gains, while delivering customer proposition would remain the key to success to have the brand loyalty and recurring revenues.

Retailers are likely to use the data points from the customers to improve the experience while building loyalty. And, the store operators may need to fit them in the shoes of customers to know what they want.

The use of robots to drive efficiency gains would be a key, as the share of sales get more skewed towards online retailing, and in turn, the retailer would need more hi-tech warehouses.

Omni-channel retailing experience would provide an efficient way to deliver the brand feel, and the retailers would continue to open more stores but at a lesser pace than we had seen in history.

Especially for fashion retailing, the pace of innovation and launch of new products should be consistent with evolving fashion and demand trends, which is likely to hold the key to deliver better value for the customers as well as shareholders.

Fashion retailers need to innovate at a pace faster than Apple Inc.