With the end of the half-year of operations in December 2019, companies have released their earnings update. Let us look at the financial performance of two industrial stocks during the half year ended December 2019.

Alliance Aviation Services Limited (ASX:AQZ) reported profit before tax (PBT) of $15.5 million for the half-year ended 31 December 2019, representing an increase of $1.4 million or 10% on the prior comparative period.

Other key highlights from the company’s half-year results are as follows:

A record number of 19,710 flight hours were operated during the half-year utilising a fleet of up to 40 aircraft, which was slightly more than the 38 aircraft fleet during the 1H 2018 and flight hours of 19,670.

AQZ continues to be the preferred airline for the Australian mining and resources sector, and a number of expiring contracts were renewed in the first half of the year, which reflects the company’s position and continued improvement in the sector.

The total revenue from operations of the Company was recorded at $151.3 million, up by 9.8% or $13.5 million during the half-year influenced by the following:

While wet lease revenue for the Company reduced, it was more than offset with higher revenue across all other revenue streams, as shown below:

The Company’s Contract revenue continues to be the major source of revenue and increased as an implication of growth in scheduled services and the full first-half-year effect of several yield improvements.

The growth in the charter revenue was an effect of the increased fleet size in the first half, which allowed for the following:

One reason that the wet lease revenue declined in the half-year ended 31 December 2019 was no influence by Alliance operating ad-hoc services for a number of domestic and international carriers as it was during the prior comparative period; however, the contracted wet lease revenue grew by 10.5% as compared to the pcp.

RPT revenue was nearly flat with a slight increase of 2% and aviation services revenue grew significantly with the increasing number of part and component transactions.

The strategic decision by AQZ to accelerate capital expenditure by bringing forward several base maintenance checks, positions the company for growth and prepares it for the upcoming change to its fleet maintenance program. Along with this, the alteration across suppliers and maintenance locations is expected to steer additional efficiency and cost control across the business.

“We continue to deliver the highest levels of service to all of our clients, safely, on time and in a cost-effective manner”

AQZ’s operating cash flow for the half-year was reported at $14.6 million representing a decrease of $7.7 million from the $22.3 million in prior year comparative period due to a number of factors including the settlement of five aircraft and inventory package from Helvetic Airways. A general increase in cash outflows was seen as an effect of the increased base maintenance program that occurred in the first half of the year.

Alliance has completed its program of fleet and inventory package acquisitions and looks forward to realising the benefits of past purchases through savings in cash outflows and reduced parts costs.

A fully franked interim dividend of 7.3 cents per ordinary share has been resolved to be declared by the Directors of Alliance, which is payable on 21 May 2020.

Retaining a positive outlook for the 2020 financial year based on a strong first-half result and a forecast improved second half of the year, Alliance expects its contract revenues to grow organically as schedule increases are forecast for a number of mining and resource sector clients and the mining industry is forecast to remain strong.

Wet lease revenues are expected to remain stable in the second half of the year; however, contracted inbound tourism operations may be affected by the softening of visitor numbers into Australia.

Notwithstanding the above projections, the charter operations are expected to benefit from the new seasonal Melbourne to Kununurra services commencing in May 2020.

The Company forecasts RPT revenue to remain stable, and aviation services are expected to produce a similar result in the second half.

The sustaining capital expenditure for the second half of the year will be $12.9 million ($11.4 million of cash) bringing the full year total to $34.3 million ($28.2 million cash) based on the current fleet utilisation and maintenance plan.

SSM’s financial results for the half-year ended 31 December 2019 include the following highlights: 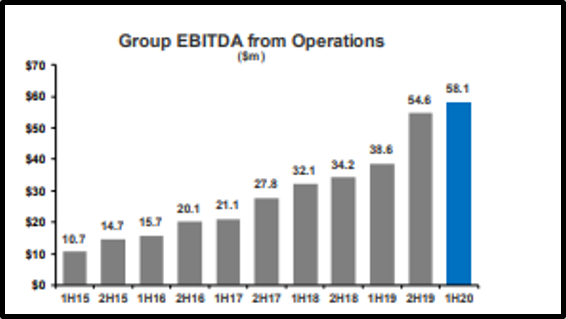 The Company’s half-year results consolidate on the record levels of profit reported in the second half of the previous financial year, and the Board has declared an increased interim dividend of 4.0 cents per share viewing the solid cashflow performance and consistency with its conservative approach to leverage.

The marginally lower revenue occurred as an effect of increased revenue from higher nbn OMMA activation & service assurance volumes and a favourable technology mix which was offset by reduced revenue from lower Wireless volumes and wind-down of the nbn MIMA & DCMA programs.

The acceleration in the revenue from utilities was constituted by the inclusion of revenue from Comdain Infrastructure following its acquisition in January 2019.

The Net Debt of the Company at the end of the half-year was $4.0 million comprising of-

The Company expects EBITDA from Operations for the second half of the year to be in line with that reported for the first half constituting to another year of solid growth for the Group.