There are many new investors who do not understand what a dividend is as it is related to an investment particularly for a mutual fund or an individual stock. Generally, a dividend is a payout of a portion of company’s net income to eligible shareholders, shares being typically issued by a publicly traded company.

Generally, company pays dividends to its shareholders to distribute profits. The company has a choice of re-investing the excess that it produced in the year in the form of reserved earnings or repaying a part of its profits to the shareholders. Generally, the amount of dividend a company is willing to pay is determined by the Board of directors of the company. There is another way of distributing a portion of profits to the shareholders; it is by means of buying back its own shares from the stock market.

Macquarie Group Limited is listed in Australia and acts primarily as an investment intermediary for institutional, corporate, government and retail clients and counterparties around the world, generating income by providing a diversified range of products and services to its clients.

Dividend History of The Company

In 1H20 the company has reported net profit of $1,457 million, up by 11% YoY and down by 13% on 2H19. This was result of the benefits of the business and geographic diversification of the company, with enhanced client activity across many business lines and encouraging market conditions across the commodity and global markets platforms. 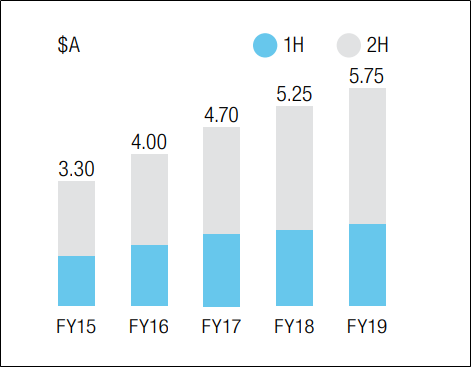 The company expects that the result for FY20 will be slightly lower than the results of FY19. Company’s short-term outlook is dependent on range of factors like the completion rate of transactions and period-end reviews, market conditions, the impact of foreign exchange etc. But the company remains well positioned to report superior performance in medium term because of its exhaustive expertise in major markets, strength in business and geographic diversity.

Challenger on the Right Track to Deliver Solid Results

The company announced its results for half year ending 31 December 2019, with strong growth in assets under management driving earnings growth. The company is on a right track to achieve 2020 full year normalised NPBT over the higher end of its projected range of $500 million to $550 million.

The company is also on right track to accomplish its normalised ROE goal of the RBA cash rate plus a margin of 14%. The full year dividend is likely to stay unaffected from FY19 at 35.5 cps, which is beyond the target dividend payout ratio of 45% to 50% of normalised NPAT, reflecting the company’s solid capital position and belief in potential growth. 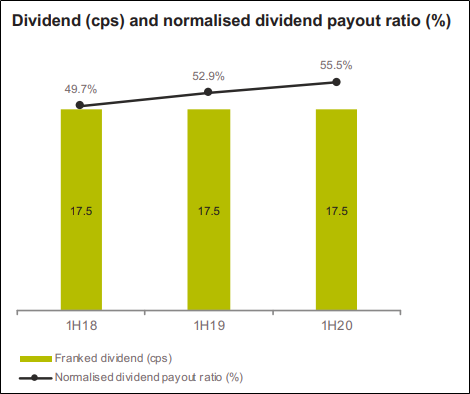 Transurban Group is the operator, owner and developer of intelligent transport system and electronic toll roads.

The company reported its half yearly results for the period ended 31st December 2019. Key highlights of the results:

The company declared an interim distribution of 31.0 cents per share for the first half of FY20.

The company reported a profit after tax attributable to owners of the company of $642 million for the half-year ended 31 December 2019. Profit after tax from continuing operations declined by 6.2% from the prior comparative period. The result was impacted by lower reserve releases, an uplift in regulatory project costs, the impact of the low yield environment, the timing of natural hazards events compared to the prior comparative period and an increasingly competitive mortgage market.

A fully franked 2020 interim dividend of 26 cents per share has been determined since balance sheet date by the directors of the company.

The Company Achieves Strong Results in First Half of FY20

The company released its results for the 1HFY20 ended 31 December 2019. Key highlights of the result:

The company declared distributions of 8.5 cents per security.