Connect the Dots: Education and Employment in Australia

Establishing Relationship between Education and Work in Australia

A recently released Survey of Education and Work conducted across Australia in May 2019 and published by the Australian Bureau of Statistics (ABS) in November 2019, revealed that nine out of ten Australians were engaged in work or study or both in 2019. The survey highlighted the following statistics for 2019: 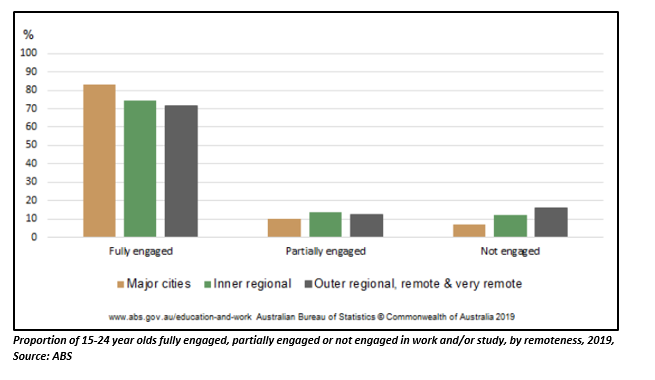 Distribution of Australians in Education and Work Based on Age-Group

The survey highlighted that with an increase in engagement of young women, the difference in rates of non-involvement for young women and men have been converging since 2004. It also added that around 83 per cent of young people living in major cities were fully engaged in work and/or study, while young Australians residing outside major cities were not so engaged.

Young Australians not in school

Among all the cities, the highest rate of full engagement (83 per cent) was from the Australian Capital Territory, followed by Victoria (79 per cent).

The survey highlighted that around 18 per cent of men and 21 per cent of women were enrolled in the study in 2019. In May 2019, there were 216k people who were employed as trainees or apprentices, relative to 196k people in 2018, the majority being males. 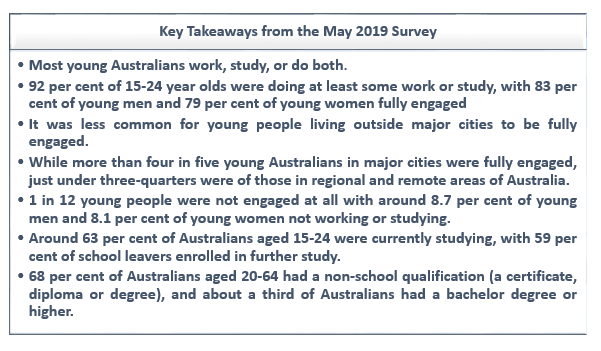 A Look at Recent Employment and Education Data in Australia

Australia is facing a high unemployment level for quite some time now, with its seasonally adjusted unemployment rate recorded at 5.3 per cent in October 2019. As per the ABS, the country observed a decline of 19k people to 12.9m in October, driven by a fall of 10.3k people in full-time employment and 8.7k people in part-time employment. This was the sharpest fall in employment in three years, underlining the requirement for the urgent impetus to stimulate wages and economic activity. Moreover, the country’s participation rate dropped by 0.1 points to 66 per cent during last month.

According to the Reserve Bank of Australia’s Deputy Governor, Mr Guy Debelle, the country’s current unemployment rate is very close to the RBA’s expectations. However, he also added that the country is unlikely to observe a substantial rise in wages unless the unemployment falls sustainably.

It was seen that 58 per cent of the international students were from the top five countries, maximum being from China, followed by India, Nepal, Brazil and Vietnam. Moreover, in September, 880k international enrolments were seen. The enrolment numbers surpassed the students count because a student can study in more than one course in one calendar year. 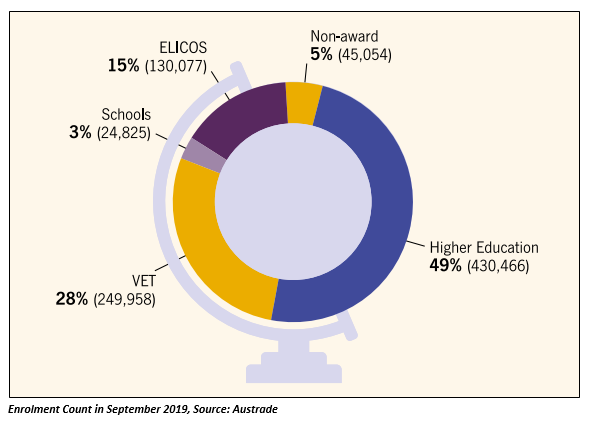 The Australian government announced multiple initiatives to support the country’s education system and the job market in Budget 2019-2020, that are discussed below:

The government’s initiatives focussed on safeguarding vulnerable workers, making sure that the countrymen are fully equipped with the future employment skills and ensuring all companies follow an identical set of workplace rules. Some of the initiatives announced by the government were:

For assisting education, the government estimated a budget of $619.1 million. The investments in education were majorly focused on supporting changes to the policies and systems that provide better education in the country.

Australia's aid helped around more than 880k additional boys and girls to enrol in school in 2017-18; providing training to more than 50k teachers. Over 4.6k men and women obtained recognised post-secondary qualifications in 2017-18.

It is worth noting that the Australian government is focussed on strengthening the education system of the country and stabilising the employment levels together with the RBA.

CLICK HERE FOR YOUR FREE REPORT!
Tags:
Education and employment