The Fintech companies across Australia have been creating a buzz of late. The sector has seen tremendous growth across the retail segment driven by higher participation from the retailers. Due to the growing use of mobile applications along with a higher usage of technology, fintech has offered value proposition to its investors.

In this article, we will discuss about companies that have already showed high business prospects during FY19 and can deliver strong bottom-line growth in FY20. We will take you through the recent updates and the operating highlights of these fintech stocks.

Bravura Solutions Limited provides software solutions to the life insurance, wealth management and fund administrative companies. Founded in 2004, the company has a presence in Australia, New Zealand, The UK, Asia, Africa and Europe.

FY19 Operational Highlights for the Period ended 30 June 2019: BVS announced its full year financial results wherein the company reported revenue of $257.7 million, up 16% on y-o-y basis. The wealth management revenue stood at $176.8 million, depicting a growth of 14% on y-o-y basis. Revenue from Funds Administration came in at $80.9 million as compared to $66.4 million in the previous financial period. The company reported recurring revenue growth of 31% on y-o-y basis, which includes 76% of the total revenue.

BVS reported EBITDA of $53.9 million and $32.3 million for the Wealth Management and Funds Administration segments respectively, depicting a growth of 17% and 21% on y-o-y basis. The company reported NPAT of $32.8 million as compared to $27 million in the previous financial year, registering a growth of 21%. 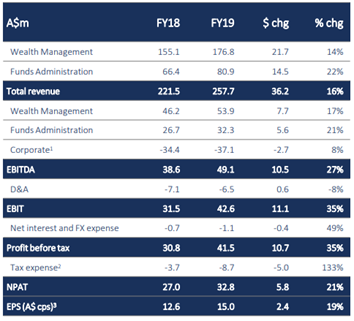 Guidance: As per the FY20 outlook, the company expects a bottom-line growth in mid-teens driven by solid recurring revenue coupled with new revenue prospects. However, UK sales might be affected in the short-term due to the political uncertainty.

Recently, the company announced a collaboration with NSW Health to be its provider of branded General-Purpose Reloadable card programs for employee Salary Packaging for a period of 5+2 years.

Q1FY20 Financial Highlights for Period ended 30 September 2019: EML announced its quarterly results wherein the company reported sales of $23.2 million, up by 35% as compared to the previous corresponding period ($17.2 million). Group Gross Debit Volume (GDV) of the company came in at $3,214 million as compared to $1,821 million in Q1FY19. EML derived 71% of GDV from virtual account numbers, 22% from general purpose reloadable and 7% from gift & incentive during Q1FY20.

In the quarter, Mobile Pays Gift Solution gained traction with new programs in market in Australia and Europe. The business reported support of more than 183k salary packaging accounts. Revenue conversion during the period stood at 72bps as compared to 94bps in Q1FY19.

Guidance: As per the FY20 guidance, the business expects revenue in the range of $116 million-$132 million, while EBITDA is expected in the range of $38 million to $42 million. The management expects NPATA within $26.2 million to $29.4 million while operating cash flow in predicted to be in the 70%-80% range.

Zip Co Limited is engaged in providing services related to the digital retail finance and payments industry across countries including Australia, New Zealand and the United Kingdom. As reported, the company will disclose its H1FY20 results at the end of February 2020.

Updates for Q2 FY20: Z1P announced its quarterly operational results wherein the company reported transactional volume of $562.6 million, up 85% on y-o-y basis. The business reported total customers at 1.75 million, up 71% compared to pcp. Total merchants stood at 20,875, depicting a growth of 65% on y-o-y basis.

During the quarter, the company completed the acquisition of Partpay which led to the expansion of the business across the UK market and NZ market. Receivables, during the quarter stood at $1,003.8 million, up 105% from pcp. Total number of transactions stood at 2,879,527, representing a growth of 133% on y-o-y basis. ZIP AU segment reported strong growth in the app download segment and in monthly app usage. The company reported robust promotional activity across the segment during the quarter, particularly Black Friday, Cyber Monday and Boxing Day.

Outlook: The company is currently annualising transaction volumes of $2.3 billion for second quarter, versus a target of $2.2 billion for EOFY 2020. The company reported 1.8 million customers with an active Zip account against its goal of 2.5 million.