The below mentioned companies reported a sound financial performance with growth across key metrics and delivery of decent dividends during the latest financial reporting period. Let us have a look at the performance of the companies in detail.

Sale of North Shore Health Hub: The company recently updated that it has executed a contract to sell the North Shore Health Hub to Healthcare Wholesale Property Fund. Stage 1 of the hub is currently under development and is expected to create trading profits for the company in FY20 and FY21. Expected contribution from the sale will be approximately $18 million - $22 million in the form of pre-tax trading profits.

FY20 Guidance: For the year ending 30 June 2020, the company expects to deliver distribution per security growth of approximately 5%. The company has a group development and concept pipeline of approximately $9.3 billion that will offer long-term value to the business.

Goodman Group (ASX: GMG) is a global integrated property group which manages property and business space in key markets around the world.

Total assets under management at the end of the period stood at $46.2 billion, representing an increase of 21% on FY18. In addition, the period was marked by significant valuation uplift of $3.8 billion across the group and partnerships. The company reported management earnings growth of 48% and average partnership total returns of 16%.

FY20 Guidance: In FY20, the company expects to report operating profit amounting to $1,040 million, up 10.4% on FY19. Operating EPS for the period is expected to be 56.3 cents, representing an increase of 9% in comparison to FY19. Distribution for the year is anticipated to be 30.0 cents per security.

Outlook: Funds from operations per security in FY19 are expected to report an approximate growth of 0.7%. The company did not take into account the positive impact of the security buy-back program while forecasting growth for FY19. Distribution for FY19 is anticipated to be 22.60 cents per security, representing an increase of 2% on prior year. 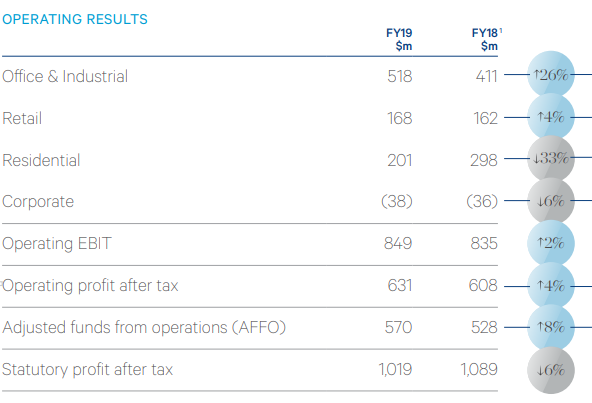 Interim Results: During the six months ended 30 June 2019, the company reported net profit after tax amounting to $352.6 million, down 51.6% on prior corresponding period. Funds from operations amounted to $295.9 million, representing FFO per security growth of 2.0% on prior corresponding period. Net tangible assets for the period amounted to $5.66 per security, rising 1.4% on 31 December 2018. 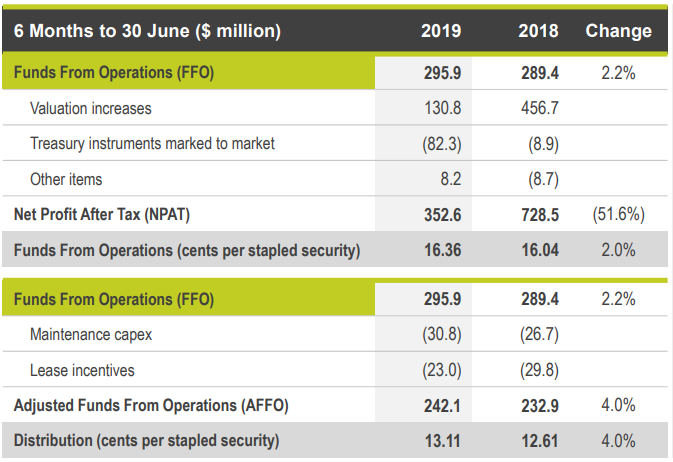 During the first half, the company completed a placement of $800 million. In addition, the period also saw the launch of a Security Purchase Plan for logistics growth opportunities and funding the acquisition of a property in Sydney. Distribution for the period amounted to 13.11 cents per security, rising 4.0% on prior corresponding period.

FY19 Guidance: In FY19, funds from operations per security are expected to grow at a rate of 2.5% in comparison to FY18. Distribution per security for the year is expected to reported growth of 4.0%.

CLICK HERE FOR YOUR FREE REPORT!
Tags:
Scentre Group (ASX: SCG) ASX: MGR ASX: GPT ASX: GMG ASX: DXS
All pictures are copyright to their respective owner(s).Kalkinemedia.com does not claim ownership of any of the pictures displayed on this website unless stated otherwise. Some of the images used on this website are taken from the web and are believed to be in public domain. We have used reasonable efforts to accredit the source (public domain/CC0 status) to where it was found and indicated it below the image.