Choosing an appropriate stock for investment is undoubtedly not an easy task. Also, some investors eye for long term investment options while others look for a shorter span period. There are multiple strategies that can be adopted by an investor while choosing the right stock to put their hard-earned money. One of the most important strategy that is frequently used by investors for selecting stocks is âassessment of their past returnsâ. Considering this, let us discuss five small-cap stocks that have performed exceptionally well in September 2019 so far.

The below table summarises the list of five ASX-listed stocks that have delivered substantial returns so far in this month:

Let us take a look at each one of these small-cap stocks in some detail below:

A mineral exploration company based in Australia, Magmatic Resources Limited (ASX: MAG) holds six projects in two of the countryâs most prosperous mining jurisdictions. With this, the company has built a portfolio of advanced gold, copper and base metals in Australiaâs Leading Resources Regions.

On 11th September 2019, the company notified about the signing of a $3m funding agreement and $300k pre-production works agreement with Blue Cap Mining Pty Ltd. The agreement was signed to speed up the development of the North Iron Cap Gold project, situated in Western Australia.

The companyâs June 2019 quarter results were out on 31st July 2019. The company reported a fall in the net cash used in operating activities from AUD 2.23 million in the June 2018 quarter to AUD 401k in the reporting quarter. The cash and cash equivalents of the company was noted at AUD 234k.

Australian-headquartered Winchester Energy Ltd (ASX: WEL) is engaged in the business of oil and gas production and exploration in Texas, USA. The company has established initial oil production on its 17,402 net acres leasehold position situated between proven significant oil fields on the largest oil producing basin in the USA.

Recently, the company provided an update about the recently completed and drilled Arledge 16#2 well at Winchesterâs Lightning Prospect. Considering the results of testing operations, the company notified that the well is presently flowing at a rate of 250 barrels of oil per day without assistance on a 32/64th inch choke.

The company released its half-year financial report for the period ending 30 June 2019 on 13th September 2019. Winchester reported a fall in its revenue from continuing operations to USD 693.5k in the reported half-year from USD 739.5k in the prior corresponding period. The company also recorded a net loss before tax of USD 331.6k during the period.

As at 12:02 PM AEST on 17th September 2019, WEL is trading at AUD 0.080, down by 5.88 per cent relative to the last closed price. With approximately 5.53 million shares in rotation, the stockâs market capitalisation stands at AUD 45.75 million. The stock has performed exceptionally well in the past, delivering a 6-month return of 325 per cent and 3-month return of 203.57 per cent.

Recently, the company signed a transformational binding agreement, initiating the entry of Envirosuite into China. The company found an appropriate Chinese partner to mark its entry into the worldâs largest market for its solutions. Envirosuite partnered with Mr Zhigang Zhang, who is one of the most famous leaders in Chinaâs environmental protection sector.

Envirosuite announced its FY19 financial results on 26th August 2019 via an ASX update. The company reported a rise of 126 per cent in its total trading revenue from AUD 3.15 million in FY18 to AUD 7.11 million in FY19. The company also posted a Net loss after tax of AUD 5.99 million from continuing operations. 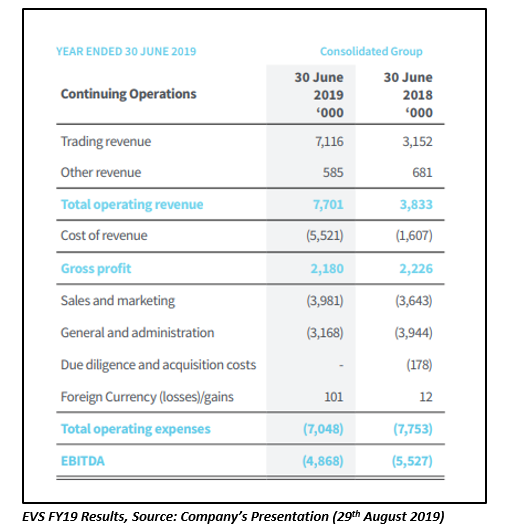 Latrobe Magnesium Limited (ASX: LMG) is engaged in the development of a magnesium production plant in Latrobe Valley utilising world-first combined hydromet/thermal reduction process. The company expects its Latrobe Project to convert 100 per cent of the treated Yallourn ash into sustainable products.

The company has recently completed the feasibility study and is currently negotiating access to ash to supply its planned $54 million 3,000 tonne pa magnesium plant. The initiation of the construction of the plant is expected to begin in December 2019. As per the company, up to 240 construction jobs will be required to construct the expanded plant and between 50-75 will be needed to build the initial plan.

The companyâs June 2019 quarter results were out on 18th July 2019. The company reported a fall in the net cash used in operating activities from AUD 1.20 million in the June 2018 quarter to AUD 649k in the reporting quarter. The cash and cash equivalents of the company was noted at AUD 402k.

A Sydney and San Francisco based firm, Total Brain Limited (ASX: TTB) has developed and sells a mental health and fitness platform, Total Brain, powered by the worldâs largest standardized brain database. The companyâs SaaS platform enables people to optimise and scientifically measure their brain capacities whilst coping with the risk of common mental conditions.

The company notified about the partnership with IBM on 29th August 2019 via an ASX update. IBM and Total Brain have joined hands to unveil GRIT (Get Results in Transition) to help veterans in transition.

The company released its FY19 financial results on 30th August 2019. The company witnessed a drop of 5 per cent in its revenue from ordinary activities to AUD 2.6 million, and a fall of 62.9 per cent in its loss for the year attributable to the owners of Total Brain Limited to AUD 8.57 million. 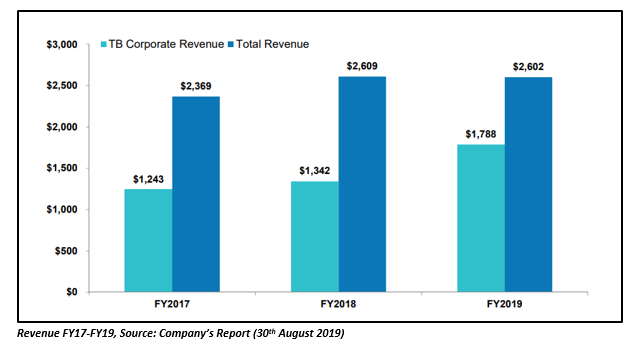