On Australian Stock Exchange, the health care sector of Australia is represented as S&P/ASX 200 Health Care index, which is trading in the green zone at 35,656.9 with a rise of 1.24% at the time of writing on 17th September 2019 (AEST 2:19 PM). In the article, we will be looking at the well-known company in the industry, i.e. Ramsay Health Care Limited. In the trading session of 17th September 2019, the stock witnessed a fall of 4.601%, primarily due to dumping of shares by one of its prominent holders (Discussed below).

When it comes to the operating and financial performance, the company delivered decent results as per its latest earnings release. The company has provided a good dividend to its shareholders with decent growth. Let’s get into details of the company:

A Look at transactions of Paul Ramsay Holdings Pty Limited.

In recent times, the company has updated the market about key director’s interest as follows:

Ramsay Health Care Limited, recently updated the market player with its results for the financial year 2019, wherein, it communicated about its operational and financial performance for the period.

Ramsay Health Care Limited had reported results marginally above the guidance for the financial year 2019 notwithstanding the acquisition of the pan European operator Capio, which was wrapped up during the period. 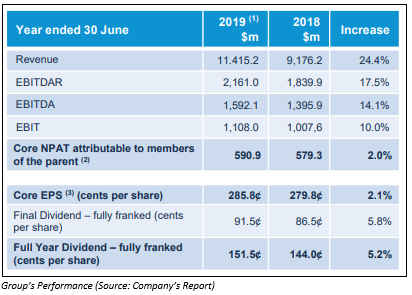 The Board of Directors of the company have declared a final dividend amounted to 91.5 cents per share, fully franked, reflecting a rise of 5.8% in comparison to prior corresponding period. The full-year dividend was 151.5 cents per share. It was 100% franked and reflected an increase of 5.2% on the previous year. The Record Date for the dividend was 6th September 2019 and payment dated stood at 30th September 2019. The Dividend Reinvestment Plan will remain suspended. It was stated that the full-year dividend payout ratio was 53% of Core EPS, with the balance reinvested into the business. 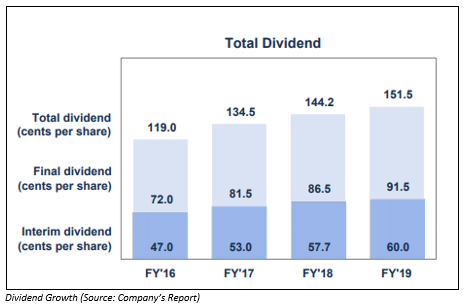