Volt Resources Limited (ASX:VRC), focussed on exploration of graphite in Tanzania, has announced that its Mauritian funding process is now underway, with the Company’s Note Offer officially opening on 27 January 2020 (Monday).

Volt Graphite Tanzania Plc (VGT), Volt’s wholly-owned subsidiary, is progressing with the raising of USD 15,000,000 through the issue of Senior Notes with a green shoe option of up to USD 15,000,000, to raise up to USD 30,000,000 by way of private placing on the Development and Enterprise Market (DEM) of the Stock Exchange of Mauritius (SEM).

The Mauritian Note offer is scheduled to close on 20 February 2020 followed by the beginning of trading of the Notes on the Stock Exchange of Mauritius DEM from 26 February 2020 (Wednesday) onward.

The Company and its financial advisor, Alphier Capital (formerly Exotix Capital) along with local brokers, commenced investor meetings from 27 January 2020 as part of a roadshow to market the Notes to sophisticated investors.

The funds raised from issuing of the Notes and listing on the DEM, would primarily be directed towards-

Key Terms and Conditions of the Note Issue are as follows: 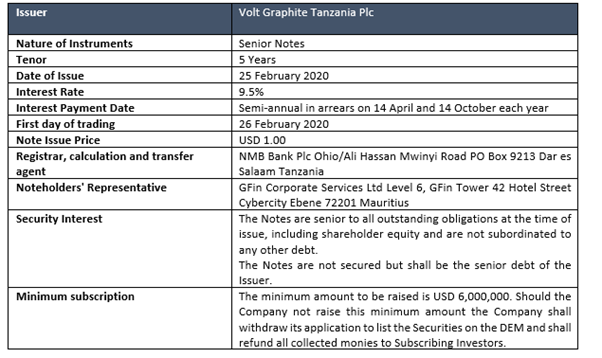 The Bunyu Graphite Project is Volt Resources’ flagship asset with supportive infrastructure in place. It is being developed in two stages as per the Pre-Feasibility Study (PFS) completed in 2016. Thereafter, the Feasibility Study (FS) was delivered in mid-2018 outlining Stage development aimed at establishing the initial market presence for Bunyu Graphite products.

Production from Stage 1 is targeted for Q3 2020 as Volt Resources completes the funding process for the same. Later, the much larger Stage 2 expansion project would be undertaken and commissioned by late 2022, based on the appetite recorded for the Bunyu products already in the market. A Definitive Feasibility Study (DFS) for expansion of the project will also be carried out. 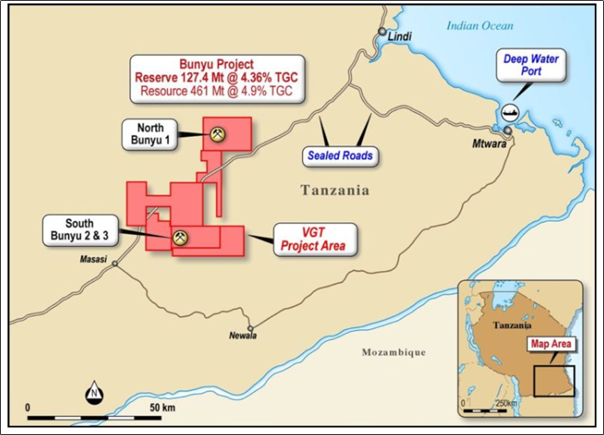