Shares of Del Taco Restaurants, Inc. (NASDAQ: TACO) jumped more than 65% after announcing that it entered a definitive agreement to be acquired by Jack in the Box Inc. (NASDAQ: JACK) for around US$575 million in an all-cash deal.

Jack in the Box is also a fast-food chain operator based in San Diego, California, It has operations in more than 2,800 locations.

According to the deal, Jack in the Box would pay US$12.51 for each share of Del Taco in cash at a premium of around 66% based on its closing price on Friday. Jack said that it expects the deal to boost its earnings immediately. Additionally, the combined firm would be able to save around US$15 million by 2023 through improved efficiency. 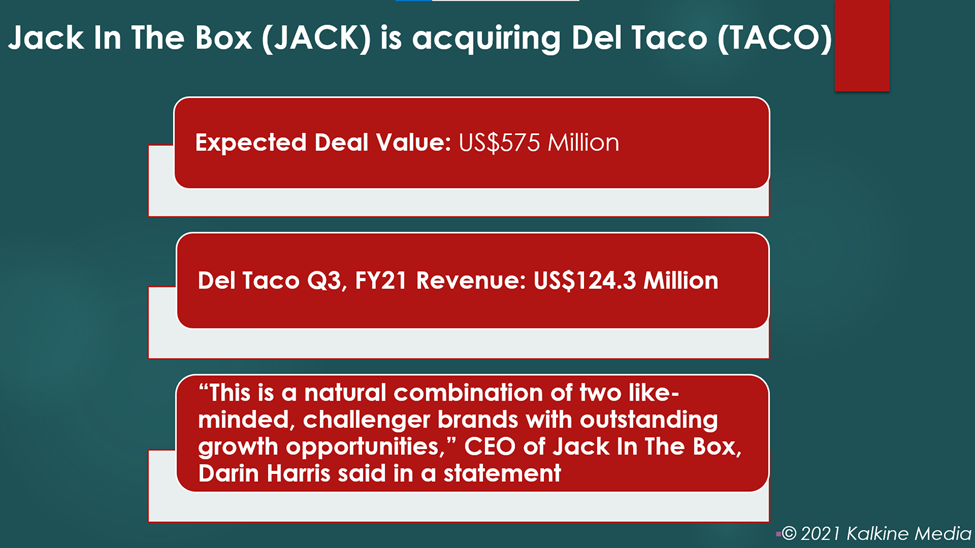 Also Read: Alibaba (BABA) shares fell over 46% this year, making them cheapest ever

Jack In The Box CEO Darin Harris said the purchase would create a strong "financial model" to scale up the business. “This is a natural combination of two like-minded, challenger brands with outstanding growth opportunities,” he said in a statement.