Should you explore General Mills (GIS) stock after its earnings?

General Mills, Inc. (NYSE: GIS) was among the major companies that made their earnings announcement this week. Meanwhile, the GIS stock appears to be gaining attention on Wednesday morning, September 21, after the company's announcement of its latest quarterly earnings results before the opening bell.

The GIS stock soared more than two per cent in the pre-market hours on Wednesday, after closing near the flatline in the prior session.

While companies like FedEx Corporation (FDX), and Ford Motor Company (F), among others, have recently posted gloomy earnings and guidance, investors kept a close watch on the earnings front for cues on the economic health.

Now, considering the gains after the earnings announcement, Kalkine Media® explores the financial highlights of General Mills below:

General Mills noted a four per cent YoY growth in its Q1 FY23 net sales of US$ 4.71 billion, from US$ 4.53 billion in the year-ago quarter. The available net earnings of the Minneapolis, Minnesota-based food company was US$ 820 million in Q1 FY23, an increase of 31 per cent from US$ 627 million in Q1 FY22.

Talking about its annual outlook, General Mills now expects its organic net sales to grow between six per cent and seven per cent in fiscal 2023, up from its prior guidance growth range of four per cent to five per cent.

However, like most other companies, General Mills said that it anticipates the soaring costs, supply chain woes, and economic health of consumers to be the major issues affecting its "performance" in fiscal 2023. 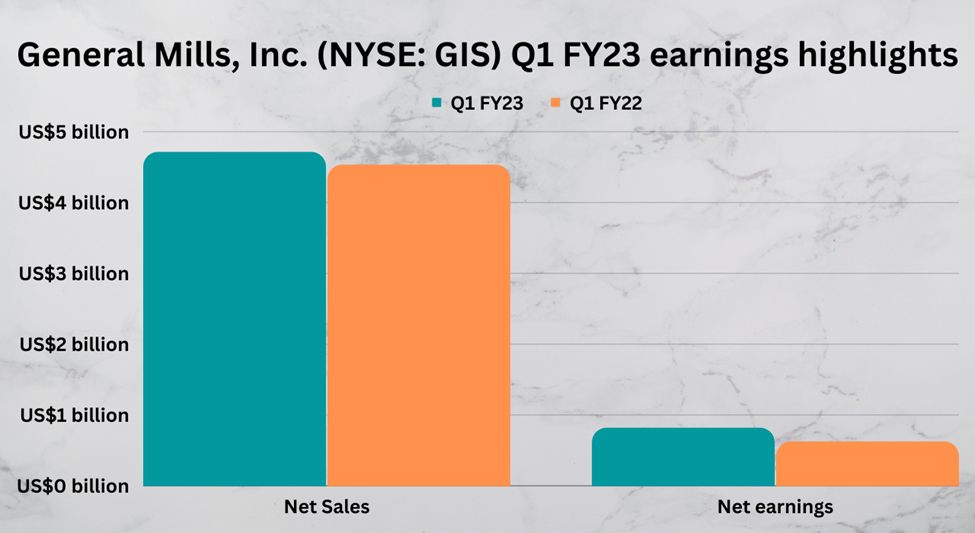 Meanwhile, at its closing price of September 20, the GIS stock has surged about 12 per cent YTD, and around 28 per cent YoY. In the current quarter, it traded near the flat line. The stock of the consumer food company touched its 52-week high of US$ 78.535 on August 24, 2022.