What Are The Top 10 NASDAQ Stocks?

There are 3,257 companies on the tech-savvy NASDAQ Stock Market as of the first quarter of 2021. The NASDAQ Composite Index, which includes over 2,500 companies, returned approximately 43 percent in the last one year and around 6 percent year to date.

Here, we explore the top 10 stocks based on market capitalization on the NASDAQ stock exchange.

Apple is the largest technology company with a market capitalization of US$2.074 trillion. Its stock gained approximately 55 percent in the last one-year period, while it is down over 6 percent year to date. The stock has a 52-week trading range of US$80.19 to US$145.09.

In its fiscal second quarter ended March, Apple doubled its net profit to US$23.63 billion as iPhone sales boosted its topline to record a 54 percent growth.

In April, Apple’s board approved an increase of US$90 billion to its existing share buyback program and a 7 percent increase in the dividend.

The technology giant saw its net income grow 44 percent to US$15.5 billion at a 19 percent increase in its total revenue to US$41.7 billion during the fiscal third quarter ended March. In addition, the cloud computing business Azure recorded a 50 percent growth.

Meanwhile, Microsoft is acquiring Nuance Communications, Inc. (NASDAQ:NUAN), which provides cloud and AI software for the healthcare industry, for US$19.7 billion.

This Seattle-based e-commerce giant has a market capitalization of US$1.623 trillion. Amazon’s stock traded in the range of US$2,437.13 and US$3,554.00 in the 52-week period. The stock rose approximately 30 percent in the last one year but declined 1.4 percent year to date.

In the March quarter, Amazon saw its net sales grow 44 percent year over year to US$108.52 billion as e-commerce and cloud business recorded strong growth. Net income more than tripled during the period.

Recently, Amazon agreed to acquire entertainment company MGM for US$8.45 billion as the company looks to boost its content on Prime Video.

Alphabet witnessed strong sales in advertisement from Google and cloud business in its March quarter. As a result, the company’s net income more than doubled to US$17.93 billion as it posted a 34 percent topline growth during the period.

Alphabet has also increased its share repurchase program by US$50 billion.

As of the quarter ended March, Facebook had 2.85 billion monthly active users and 1.88 billion daily users on its platform.

Facebook reported a 48 percent year-over-year growth in its first-quarter revenue to US$26.17 billion on strong growth in advertisement revenue. Net income totaled US$9.50 billion, up 94 percent year over year. 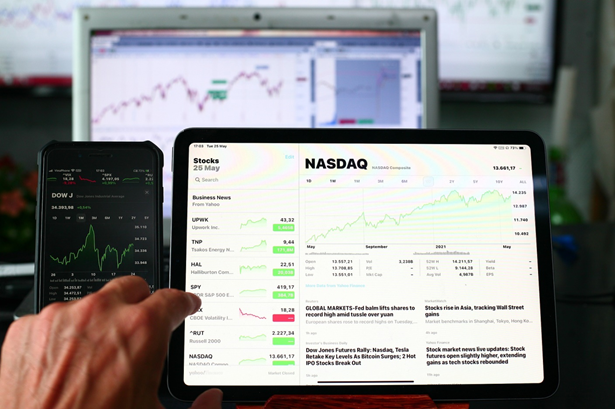 The California-based electric carmaker has a market capitalization of US$601.022 billion, and its stock surged approximately 249 percent in the last one-year period. The stock, which is down around 13 percent year to date, has a 52-week trading range of US$171.69 to US$900.40.

Tesla reported a record non-GAAP net income of US$1.05 billion in its first quarter. Total revenue jumped 74 percent as the company delivered 184,877 vehicles during the period and reported US$518 million in revenue from the sale of regulatory credits.

NVIDIA’s fiscal first-quarter net income more than doubled to US$1.91 billion as its revenue soared to US$5.66 billion from US$3.08 billion in the year-ago period. The company forecasts its second-quarter revenue to total US$6.30 billion.

Meanwhile, its board has announced a four-for-one stock split, which would increase its authorized common stock to 4 billion.

The digital payments company has a market capitalization of US$304.572 billion. Its share price jumped 66 percent in the last one-year period and is up 9 percent year to date. The stock has a 52-week trading range of US$150.00 to US$309.14.

PayPal had 392 million active accounts at the end of the March quarter. The company reported a revenue of US$6.03 billion in the first quarter, up 31 percent year over year as total payment volume soared 50 percent. Net income came in at US$1.10 billion.

The company is anticipating its full-year revenue to grow 20 percent and a 21 percent increase in non-GAAP EPS.

This Dutch semiconductor equipment maker’s stock rallied 102 percent in the last one year while it is up 34 percent year to date. The company has a market capitalization of US$280.779 billion. The stock has a 52-week trading range of US$332.80 to US$688.09.

ASML expects its revenue to increase 30 percent year over year in 2021 amid a significant increase in demand for semiconductor chips. The company reported better-than-expected first-quarter net sales of €4.36 billion and a net income of €1.33 billion.

The media and technology company has a market capitalization of US$260.81 billion, and its stock gained 42 percent in the last one-year period. The stock, which has a 52-week trading range of US$37.77 to US$59.11, is up 9 percent year to date.