The second quarter earnings season has proved to be a boon for the market in recent weeks. The stocks came under pressure in the year's first half, dragging down the overall market.

However, the second quarter earnings lifted the spirits of the market participants in July, which has reflected in the overall market performance. All the three indices, Dow Jones, S&P 500, and Nasdaq, have marked their best performing month in July since 2020, in the wake of the positive earnings season.

Let's revise the previous quarter's earnings highlights with Kalkine Media® and stock details of the companies ahead of the scheduled release of their latest financial results.

The BNTX stock gained notable traction in the market, as seen by the surge of about ten per cent quarter-to-date (QTD) in its price. However, it fell nearly 51 per cent on an annual basis while slipping about 35 per cent in 2022.

The biotechnology company has recently been in the news after it announced, along with its vaccine partner Pfizer Inc. (NYSE: PFE), that they have launched a Phase 2 study for evaluating an advanced Covid-19 vaccine that aims at the original strain of the virus as well as the omicron variant. This study intends to provide a stronger and long-lasting immune response against the virus.

In addition, the companies announced on June 29 that they have entered into a new vaccine supply agreement with the US government, under which the government would receive over 100 million doses of its vaccines. The companies said that the doses are expected to be delivered as soon as late summer this year and would continue in the final quarter of the year.

During its first-quarter earnings release, the company reiterated its Covid-19 vaccine revenue guidance range of € 13 billion to € 17 billion for fiscal 2022.

The year hasn't been great in the first half for the cryptocurrencies, while the major cryptos like Bitcoin (BTC), and Ethereum (ETH), fell sharply during the period.

The crypto exchange platform operator fell about 72 per cent year-to-date (YTD) while plummeting about 70 per cent in one year. However, on a QTD basis, it showed gains of about 46 per cent.

The US$ 17.67 billion market cap company has been recently in the news after the law firm of Wohl & Fruchter LLP said that it is investigating whether the crypto exchange company has violated any Federal laws.

Walt Disney Company had a relative strength index or RSI of about 63, as per Refinitiv data. RSI range from 50 to 70 indicates a neutral or stable state for the stock. 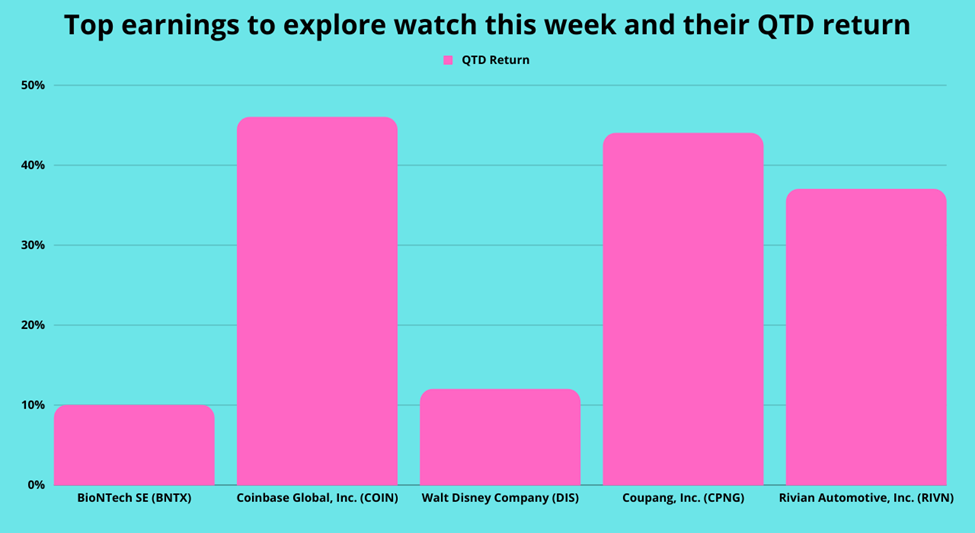 The e-commerce sector got a significant boost during the Covid-19 pandemic, as consumers shifted their focus to online shopping due to restrictions. Despite the trend still advancing at a stable pace, it seemed to have cooled off from its pandemic rally.

The stock of the US$ 32.26 billion market cap firm lost about 37 per cent this year while decreasing nearly 50 per cent YoY. On a QTD basis, it gained around 44 per cent.

Rivian was one of the biggest IPOs in the prior year. The EV maker has also been in the news due to its backing from Amazon.com, Inc. (NASDAQ: AMZN).

Rivian said it manufactured 4,401 vehicles in the second quarter of 2022 and delivered 4,467 vehicles. The automotive technology firm is on track to meet its 25,000 annual production outlook as it previously provided, Rivian added.

On the other hand, the US GDP showed that the economy fell by 0.9 per cent annually in the second quarter, following a decline of 1.6 per cent in the starting quarter of 2022.