The customer-driven fashion brand for women, Lulu's Fashion Lounge Holdings, Inc., announced the launch of its proposed initial public offering on November 1. The company is expected to make its debut on the US market on November 11.

The online fashion firm is gaining attention from investors among a wave of IPOs this year, as consumers are expected to spend more in the coming months with the economic recovery on track. Consumers were forced to limit their spending during the pandemic, as the economy was crippled due to it. However, with positive economic data indicating that the economic recovery is gradually increasing its pace, investors are optimistic about consumer discretionary companies.

Lulu's started its journey in 1996, with a vintage shop in a small town in northern California, while in 2005, it went online. It is now based out of Chico, California.

The company is led by David McCreight since April, who was earlier the CEO of Anthropologie Group of Urban Outfitters Inc. and before that, was the president of Under Armour Inc. 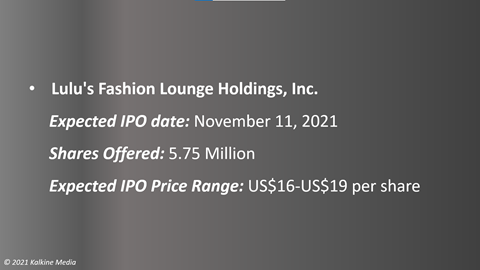 Also Read: 2 lithium stocks to watch with over 100% YTD returns as COP26 convenes

The stock price of the initial public offering is currently anticipated to be between US$16 and US$19 per share. It is expected to start trading on Nasdaq Global Market under the ticker "LVLU".

In the first half of 2021, Lulu had around 236 new products launched each week, while its average unit retail prices were about US$50. It had 2.5 million active customers over the one year ended on October 3.