Advanced technology solutions are the key driving forces behind all digital transformation initiatives across various sectors. Artificial intelligence (AI) is one such technology that is the basis of several modern-day solutions that not only helps in the automation of several tasks that would otherwise require human intervention but also can conduct them efficiently.

AI is created through machine learning algorithms that involve training a system with large volumes of data and then leveraging the trained system to offer interesting insights. Many tech firms use AI to make existing operations, such as self-driving cars, robotics, and virtual assistants, more powerful. 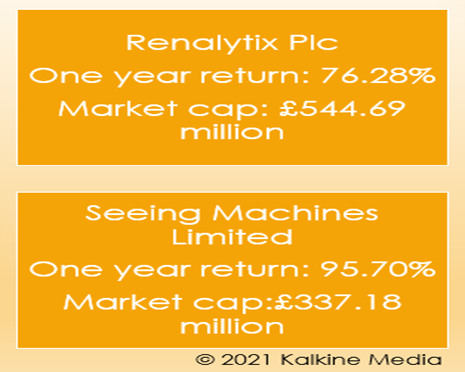 Here we will review the investment prospect in two AI stocks listed on the LSE.

In the last one year, the shares of Renalytix returned 76.28% to shareholders.

Seeing Machines is engaged in designing and developing AI-powered operator monitoring systems to enhance transport safety. Recently, Seeing Machines unveiled the core capabilities of its Occula® Neural Processing Unit. It also announced that EROAD Limited would integrate its Guardian technology into the fleet management software to lower the risks associated with driver fatigue.

Seeing Machines estimates revenue to be A$47.3 million for FY2021, representing an 18% increase year-on-year.

In the last one year, the shares of Seeing Machines returned 95.70% to shareholders.