UK-based supermarket and retail group Marks & Spencer (LON: MKS) was found to have outpaced other food retailers ahead of the holiday period driven by a rise in high street shopping following the lockdown in 2021, as per an analysis by NielsenIQ.

The retailer’s sales growth, for the 12 weeks to 26 December period, was 9.4 per cent when compared to the same period in 2020. The group had earlier missed out in 2020 due to its stores located in areas where lockdowns were in effect. MKS expanded to online sales through online retailer Ocado (LON: OCDO) in 2020.

The group’s shares rose following this news by nearly 1 per cent on Tuesday. It is expected to release its holiday period sales data later this week on Thursday.

Marks and Spencer’s competitors trading data during the period

Lidl GB: The second-fastest growth came from Lidl, a discount retail chain, at 8.5 per cent during the period according to the report. The rise was helped by the group’s opening of 8 new outlets in December 2021. Lidl has almost no online food sales.

Aldi: Meanwhile, Aldi, another discount food retailer, reported sales growth of 4.8 per cent during the 3-month period. The group’s growth was similarly boosted by new store openings. Aldi had though proclaimed earlier that it was the only major UK supermarket to have seen increased sales in December 2021.

Aldi had reported its sales were up 0.4 per cent in December 2021 from the same period in the year before.

The report found UK shoppers spent about £7.1 billion in the two weeks to 26 December. This was above forecasts of about £6.8 billion and much higher than the total spending of about £6.7 billion seen in 2020. 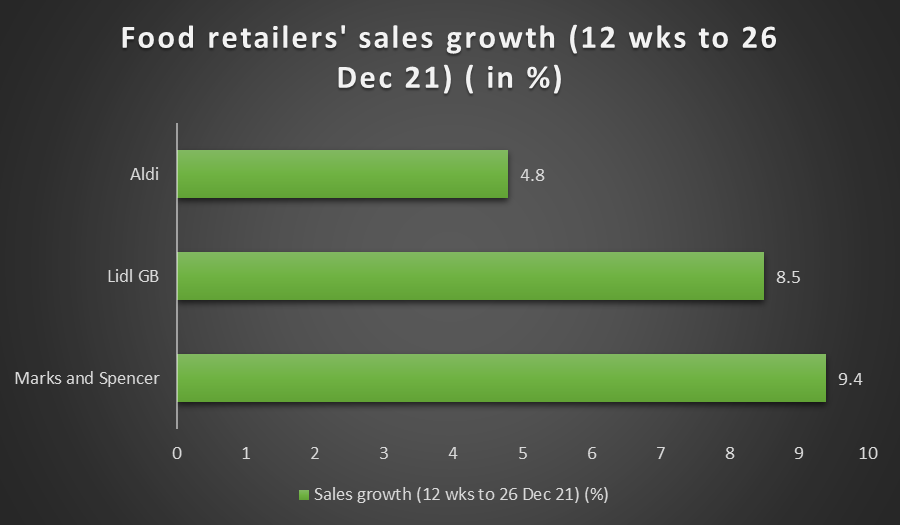