The emphasis is laid on value creation through right acquisitions and continuous exploration which may further lead to strategic partnerships such as Joint Ventures etc. The company has bought mineral assets in the African region, focussing on sites where there has been historical production. The company has projects located in Zimbabwe, Mozambique and Togo.

On 28 May 2019, the board of the company issued shares (ordinary) to Directors, employees and to 3rd parties for settlement of unpaid amounts (accrued) to the tune of £145,787. These shares are termed as “Settlement shares”. The Company issued 54,241,382 shares to Directors as settlement for unpaid fees (accrued) at an issue price of 0.09 pence/share with the total amounting to £48,817. The company also issued 39,966,803 shares have been issued to certain employees in settlement of unpaid salaries (accrued) amounting to £35,970. In addition, 67,777,778 shares have been issued to 3rd parties as settlements for unpaid amounts (accrued) amounting to £61,000, at the issue price.

The “KME Payment Shares” which were issued earlier has not been released till date by Premier to the KME. Premier African Minerals Limited has been unable to revise the relationship between the company and KME Plant Hire Proprietary Limited ("KME") for the next phase of drilling activities at the Zulu Lithium Project in Zimbabwe. The company controls the Zulu Lithium Project in Zimbabwe.

The company has cancelled the shares (212,413,793) which were issued as pre-payment to KME for mobilisation and drilling. As the long form drilling contract with KME was called off, the company has cancelled the delivery of shares which were supposed to be paid to KME and application is submitted to AIM for the cancellation of the KME Payment Shares. This is effective on or about 4 June 2019.

Since the proposed drilling programme by KME has been called off, the Company has once again initiated discussions held with the previous drilling contractor to recommence work at Zulu as the company believes that this should expedite the process.

The Company has been successful in establishing contact with the Zimbabwe Ministry of Industry, Commerce and Enterprise Development, which supervises National Indigenization and Economic Empowerment Fund of Zimbabwe (NIEEF).

The Company's agreement with NIEEF with respect to RHA Tungsten, (announced on 7 May 2019) has a binding provision to provide $6 million to the project. Till date, these funds are still awaited. While the company believes the agreement to be fruitful and expects NIEEF to comply with the terms agreed upon earlier. 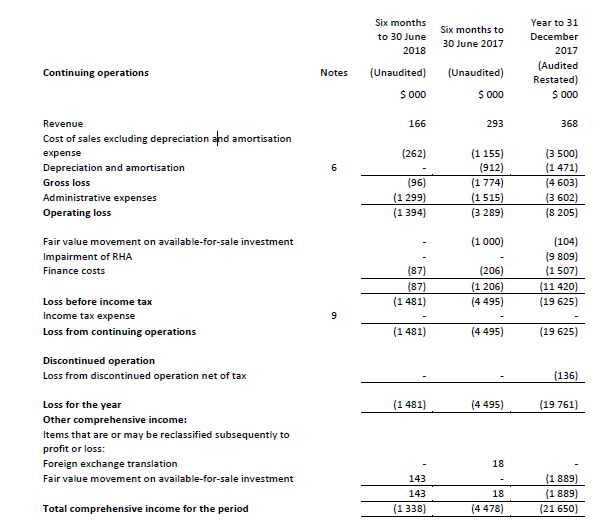 During the first half of the period ending 30 June 2018, the Company was able to raise $0.563 million through equity subscriptions, at an issue price of 0.16 pence per share, those proceeds were used to cancel all the existing warrants held by Darwin Capital Limited ("Darwin") and for general working of the company. The Company also entered a loan worth $0.300 million with a company owned by a Trust of which Mr George Roach is a beneficiary.

Daily Chart as at June-10-19, before the market close (Source: Thomson Reuters)