House prices in the UK reached a record-high (since February 2007) in September 2021 due to the end of the stamp duty holiday scheme. According to data by Halifax house price index, housing prices in the country rose by 1.7% in last month, increasing the value of the average property by £4,400 and driving up the year-on-year inflation in house prices to 7.4%.

The rising prices also reversed the recent three-month decline in annual growth, which reached the highest in May at 9.6%. The average house price in the UK now stands at over £267,500. The end of the stamp duty holiday in England, and the rising inclination amongst homebuyers to close deals, are key factors contributing to rising prices.

The pandemic has played a significant role in house price surge during the pandemic. At the same time, the health crisis also played a pivotal role in influencing the housing choices of people. Currently, people prefer houses with larger outdoor areas and nearer to green spaces compared to closed and compact apartments and flats. 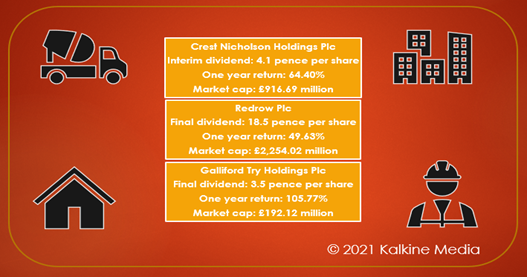 Below is detailed coverage of the investment prospect in 3 housebuilder stocks listed on the London Stock Exchange (LSE).

Crest Nicholson Holdings is an FTSE 250 listed housebuilding company based in the UK. Recently, Crest Nicholson launched the second phase of its Daventry development in Northamptonshire and St John's Mead development of 158 homes in Suffolk.

Crest Nicholson’s board declared an interim dividend of 4.1 pence per share for HY 2021.

In the last one year, the shares of Crest Nicholson Holdings returned 64.40% to shareholders, and the market cap of the company stands at £916.69 million as of 7 October 2021.

Redrow plc is a housebuilding company that operates via a network of 14 operational divisions in the UK. Its total number of legal completions rose by 39% year-on-year to 5,620 for the year to 27 June 2021 from 4,032 in the previous year.

Galliford Try announced a final dividend payout of 3.5 pence per share for the year ended 30 June 2021.

In the last one year, the shares of Galliford Try Holdings returned 105.77% to shareholders, and the market cap of the company stands at £192.12 million as of 7 October 2021.