A substantial chunk of long-time buy-to-let investors saw an opportune time to sell due to the latest statistics on capital gains tax (CGT). Since May 2020, the receipts have increased more than four times. It is to be recalled that the government had allowed the property market to start re-functioning in May after the coronavirus-induced lockdown. Thereafter, the receipts have been increasing every month consistently to reach £44 million recorded at the end of August.

As a large chunk of the CGT is collected on sales of non-residential assets, experts felt that the rise indicated that landlords were making use of rising property prices and trying to complete the sales before the economic scenario worsened. It has been noticed that the buy-to-let investors have suffered losses on the account of increasingly tough tax rules. In addition, a likely crash in house prices due to the pandemic-led economic crisis could serve as another potential challenge.

It has been noticed that due to the economic impact of the pandemic, several tenants are not able to pay rent. This has affected the ability of the landlords to pay their mortgages. Besides, there could be a threat of stricter tax treatment if Chancellor Rishi Sunak hikes the rates charged on investment profits to fix the forecast of £322 billion in budget deficit. 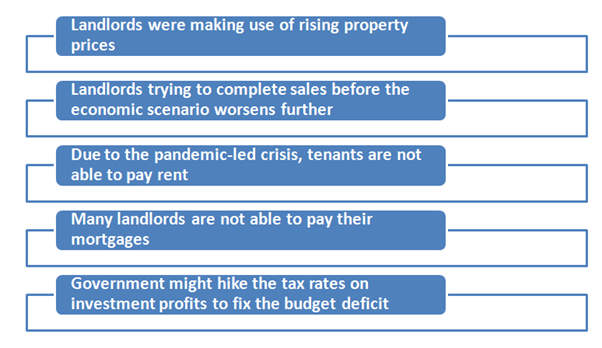 According to auction house Strettons data, almost 85 per cent of the properties in receivership at its July 2020 auction were buy-to-let properties as compared to 75 per cent in 2019. Industry insiders agreed that tougher tax rules along with the inability of the tenants to pay rent had forced various sellers to flee the market. This has been the trend, despite the availability of mortgage holidays from the banks.

On the other hand, some experts believe that in addition to the landlords attempting to get out, many banks and other credit lending institutions are also finding it the perfect time to come out of their investments.

Also read: Why Are The Property Rents Falling In London?

According to a recent poll by YouGov, a global public opinion and data company for the National Residential Landlords Association, nine per cent of landlords said they were planning to exit the market altogether. While seven per cent said that over the next one year, they would sell some of their rental properties. This situation would potentially restrict the supply of available homes for those who could not afford a home of their own, people looking for social rented housing, and those preferring the flexibility offered by the private rented sector.

The survey also showed that more than a fifth of landlords have suffered income losses due to the coronavirus-led crisis. Around 19 per cent of those surveyed lost up to 50 per cent of their usual rental income as an adverse impact of the pandemic, while three per cent had lost more than 50 per cent.

In recent past, many property investors have bought and sold properties with considerable profits after refurbishing. They viewed that this was the perfect time for the landlords possessing empty properties to complete the sales before demand starts getting saturated, prices start declining, and taxes start rising. Many of them planned to sell or reduce their portfolio to get benefitted.

According to the Nationwide Building Society, house prices in September were around five per cent higher as compared to 2019 in the same period. Experts believe that pent-up demand after the coronavirus lockdown and the stamp duty holiday have brought a mini-boom in the market. Many have cautioned a false dawn and said that a potential crash is expected with the ending of mortgage holidays, ending of government support, and rising unemployment rates.

On the economic front, concerns have already started showing up on the demand side as around a fifth of would-be movers who earlier planned to purchase a new home during the pre-pandemic times have put their plans on hold. Of these, more than 25 per cent did so due to fears of fall in prices.

According to the estimates of the Office for Budget Responsibility (OBR), the UK house prices could possibly decline by more than a fifth by next year in this quarter. Landlords who opt to sell at present are expected to be taking advantage of the historically low tax rates on any gains they would make in excess of the £12,300 tax-free allowance.

In the meantime, the Treasury has played down the buzz that the CGT could be increased in alignment with the rates of income tax after Sunak ordered an official reassessment into the levy in July. But experts feel that the increase in taxes could not be avoided as the national debt surpassed the yearly economic output.

To sum up, a large number of buy-to-let property investors are trying to sell their assets. They are taking advantage of the recent rising property prices and trying to complete the sales before the economic scenario worsens further. In recent times, the buy-to-let investors have suffered losses because of increasingly tough tax rules. In addition, a likely crash in house prices could bring another potential challenge. Many tax advisers have suggested their clients to sell their assets and investments they no longer require now, before it becomes difficult to sell.