Would recent acquisitions made by BAE Systems Plc proven to be lucrative?

Upcoming Event: The Company will announce its financial results for the year ending 31 December 2020 on 25 February 2021.

The top-line of the Company has witnessed significant growth across four business segments except for Maritime, which got affected due to Covid-19 pandemic. However, underlying EBITA has seen a decline in all sectors except the Cyber & Intelligence segment.

The Company is expecting its sales to have decent growth of low single-digit percentage during FY20 considering the impact of two acquisitions. The increased volumes in F-35, Combat Vehicles and development in the electronic defence portfolio will offset the weak performance of its commercial business. The Company is expecting its free cash flow to remain approximately £800 million for FY20. The Company has bright prospects because of large order backlog and incumbent programme positions.

Is the trading business of J D Wetherspoon Plc getting affected by Covid-19 restrictions?

J D Wetherspoon Plc is the FTSE 250 listed Company that owns and operates pubs throughout the UK and Ireland.

Upcoming Event: The Company will announce its next trading update on 20 January 2021.

The sales of the Company declined by 27.6% for the 15 weeks ended on 8 November 2020. The 756 pubs in England, Northern Ireland and the Republic of Ireland will remain closed until it receives a further update from the UK and Irish governments to the effect that pubs are allowed to re-open.

The Company has significantly high liquidity of £234 million as of 25 October 2020.  The cash burn during the month of closure is estimated to be approximately £14 million.

Ben Thorne has been appointed as a non-executive director of the Company with effect from 17 December 2020. 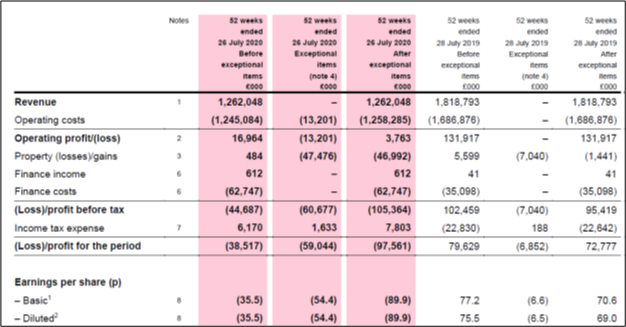 Regarding the financial position, total capital investment was £171.6 million in the period (2019: £167.6 million) out of which £41.0 million was invested in new pubs and pub extensions, £32.1 million in existing pubs & IT and £98.5 million in freehold reversions, where Wetherspoon was already a tenant. The net debt during the period has increased by £80.0 million to £817.0 million.

All business segments have witnessed a significant decline in their sales as bar sales decreased by 29.3%, food sales by 30.1%, slot/fruit machine sales by 20.9% and hotel room sales by 38.7%.

The Company is facing a lot of challenges from the start of FY21 and carrying the negative momentum that it went through in the second half of FY20. The trading business is getting affected by the restrictions caused by the pandemic, and the adverse impact will remain for a while as the duration of restrictions is still unknown. The Company has also referred to the entire regulatory situation as chaotic, determining the negative consequences of changing national and local regulation. The Company has also raised doubts regarding the imposition of the curfew.