Tiziana Life Sciences Plc (LON: TILS) is the LSE listed Biotechnology company, having its focus on developing drugs to cure diseases in oncology and immunology. The Company had reported a net loss in the range from £5 million to £9 million consistently from last five years. Based on its 1-year performance, shares of TILS have generated a return of about 156.47%.

The Company is focused on the following products –

Milciclib (TZLS-201) - Milciclib can be defined as orally bioavailable, small molecule broad-spectrum inhibitor of CDKs (CDKs): 1, 2, 4, 5 and 7 and Src family kinases. CDKs are a family of highly conserved enzymes that regulates cell cycle through a series of activities that occurs in cells directing towards division and duplication of its DNA to generate two daughter cells. Src family kinases perform regulation of cell growth and potential transformation of normal cells to cancer cells.

Foralumab (TZLS-401) - Foralumab is the only fully human anti-CD3 mAb in clinical development. It is different from the previous non-human or humanized anti- CD3 mAbs. Foralumab picks out the CD3 epsilon (CD3ε) receptor, which is an accepted method for modulating T-Cell response and achieving immunosuppression. The Company believed Foralumab could have broad application to autoimmune and inflammatory diseases, such as NASH, Crohn’s disease, MS, type-1 diabetes, or T1D, inflammatory bowel disease, psoriasis and rheumatoid arthritis, where T-cell response modulation is preferred.

Anti-IL6r (TZLS-501) - TZLS-501 is a fully human mAb targeting the IL-6R. The Company had licensed the intellectual property from Novimmune in January 2017. This fully human mAb has a unique method of action depleting circulating levels of the IL-6 in the blood. 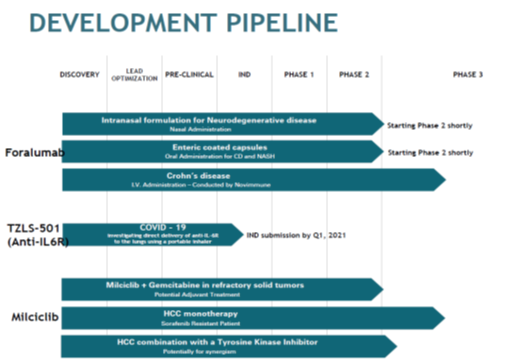 On 04 January 2021, the Company had announced that it had completed the clinical study encapsulating details of the investigation of nasally administered Foralumab to treat Covid-19 patients in Brazil. It is a proprietary human monoclonal antibody which exists standalone or in combination with orally administered dexamethasone in COVID-19 patients. The Company had reported the final dose of the trial on 21 December 2020. The topline data from this trial would be available by January 2021. The nasal delivery of Foralumab would provide immediate relief to COVID-19 patients as COVID-19 enters through the nasal and respiratory passage.

On 11 November 2020, the Company had announced its association with Parexel Biotech to conduct phase 1b/2 clinical trial in patients regarding Crohn's Disease.

On 02 November 2020, the Company had updated regarding the initiation of a collaborative clinical study investigating COVID-19 patients in Brazil regarding nasally administered Foralumab either alone or in combination with orally administered dexamethasone. 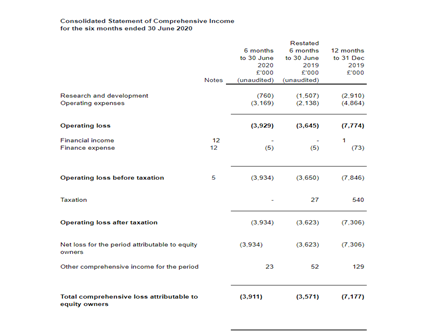 The Company had updated regarding the completion of its clinical study in Brazil investigating nasally administered Foralumab, its proprietary human monoclonal antibody, and final data of this clinical study would be available by January 2021. The Company had completed various fundraising activities to smoothen the process of developing clinical trials of Milciclib and Foralumab. The activity pipeline of the Company is shown below - 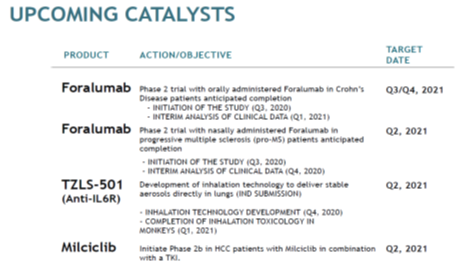