Given the above-market conditions, we would review two consumer discretionary stocks - Bellway PLC (LON: BWY) & Vistry Group PLC (LON: VTY). It is mindful to note that the UK government has exempted the stamp duty for homes worth up to £500,000 until 31 March 2021. Let’s walk through the financial and operational updates to understand the stocks better.

Bellway PLC is a UK based company that designs and builds home. The Company sells private and social homes, and in H1 FY20 it sold 5,321 homes at an average house price of £286,570. The Company is headquartered in Newcastle upon Tyne, and it is included in the FTSE 250.

Trading update as reported on 9 June 2020

Bellway sold 6,721 homes between 1 August 2019 and 31 May 2020 of which 708 homes were completed on or after 23 March 2020. The Company’s sales activity was disrupted due to the lockdown, and the net reservation declined to 71 homes per week for ten weeks from 23 March 2020 to 31 May 2020. The average booking was 231 per week last year between 25 March 2019 to 2 June 2019. The land expense between 1 August 2019 and 31 May 2020 was £597 million, and the future land expense obligation is close to £35 million. The Company has currently suspended the new land purchase activity. The Company started the reconstruction at close to 230 sites, and it is taking all precautionary health and safety measures. Bellway also reopened all the sales offices from 1 June 2020. Initially, when the reconstruction started, only one tradesperson was operating at one home at a given time. The plan is to have more than one tradesperson working at the site at separate floors to expedite the construction rate. The Company had an order book of about 6,038 homes with a total value of £1,568 million. As on 31 May 2020, the Company had net debt of £157 million that declined from £261 million on 2 June 2019. The Company had committed borrowing facility of £545 million, and it can issue close to £300 million under the Covid Corporate Financing Facility (CCFF) of the government. The Company furloughed 75 percent of the workforce and paid the full salary of April and May without seeking the government’s support. As on 31 May 2020, the total amount outstanding for payment to suppliers and subcontractors was close to £65 million. 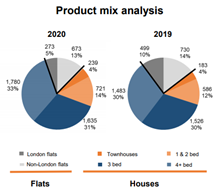 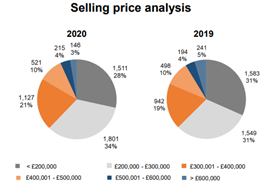 1-Year Chart as on July-28-2020, before the market close (Source: Refinitiv, Thomson Reuters)

The Company has started the construction and sales activity in the UK and Wales. The focus is on the sites that are in the final stage of construction. The Company maintained the sales activity during the pandemic through online channels and telephone. It had limited viewing of the homes, and Bellway plans to start the home visits for routine maintenance gradually. The Company has suspended future guidance, and it is confident of the liquidity and business position to sustain the current pandemic.

The sales operation of the Group remained operational during the lockdown and accepted new home bookings and handed over the completed homes to customers who wanted to move in. In H1 FY20, the Vistry Partnerships delivered 489 homes from mixed-tenure operations at an average house price of approximately £233,000. The mixed tenure operations generated revenue of close to £84 million, which was down from £94 million in H1 FY19. The contracting revenue was £213 million in H1 FY20 with total 1,250 home sales. The Vistry Partnerships reported revenue of £297 million in H1 FY20 that declined from £338 million a year ago. Vistry Partnerships exchanged contracts for five sites with Homes England. Housebuilding segment generated revenue of £344 million in H1 FY20 through sales of 1,235 units, of which 975 were private units, and 260 were affordable units. The average selling price of the Housebuilding unit was £290,000. In H1 FY20, the Group acquired 1,815 plots at eight sites and contracted 823 plots at three sites. The Group obtained detailed planning for Sandymoor, Runcorn and Lea Castle, Kidderminster sites that would have 900 homes. As on 30 June 2020, the Group had net debt of approximately £355 million. Vistry had committed borrowing facility of total £770 million with maturities spread out until 2027. The Group suspended the second interim dividend of £60 million in cash but plans to issue bonus shares for the shareholders that are subject to approval.

1-Year Chart as on July-28-2020, before the market close (Source: Refinitiv, Thomson Reuters)

The Group has suspended the short-term guidance given the current uncertain situation, although it experienced improved demand in recent weeks. The Group expects deflationary pressure on the supply chain and the stable home prices that combined with the completion of new homes would improve the margins in H2 FY20. Vistry Partnerships has a steady pipeline for contracting and mixed-tenure developments. The Group has forward sales including the Housebuilding booking of total £1.26 billion.