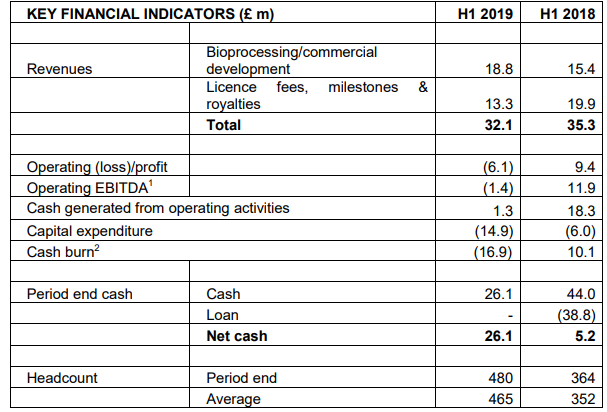 In H1 FY2019, the company’s revenues stood at £32.1 million, a decrease of 9 per cent as compared with the corresponding period of the last year. This reflects the significant licence income received in the first half of the financial year 2018. However, bioprocessing/commercial development revenues surged by 23 per cent to £18.8 million against the £15.4 million in H1 FY18. Licence fees, milestone & royalties revenues reduced to £13.3 million as compared with the same period in 2018. Operating loss and an operating EBITDA loss of £6.1 million and £1.4 million against the profit of £9.4 million and £11.9 million respectively, driven by the lower revenues and increased expenditure to strengthen the company’s strategic and operational capacity in preparation for additional volume progress in bioprocessing volumes.

In H1 2019, £11.5 million of Axovant milestone was attained with the adulterate of the 1st patient in the 2nd cohort of the AXO-Lenti-PD Parkinson’s disease clinical trial. £53.5 million were invested by Novo Holdings A/S in the company, in lieu of 10.1 per cent of the outstanding shares after the rise in the capital. The transaction proceeds were used to wholly repay the £43.6 million of debt facility with Oaktree Capital Management.

Cash generated from operations stood at £1.3 million, a decrease from the previous year same period data, reflecting the Axovant and Sanofi licence fees received in the first half of the financial year 2018. On 30th June 2019, Cash was £26.1 million, a decline from the £32.2 million in FY18.

Its bioprocessing facility construction was progressing in tandem with the company’s capital expenditure surging to £14.9 million in H1 FY19 as compared with the first half of 2018 of £6.0 million, the cost of which was partially offset by Innovate grant funding of £2.0 million received to support the United Kindom’s efforts to harvest viral vectors and also ensure adequate supply to services subsequent demand.

Over the past 12 months, the company announced the new partnership, and it will continue to help to bolster revenues from commercial development and bioprocessing activities. H1 FY19 also reflects the change of another GMP suite from adherent processing to bioreactors. The Board hopes the company would have a robust second half of the financial year 2019 as expected earlier.

In the second half of 2019, the capex will continue at a high rate from the FY18 through the on-going build and fit-out of the innovative OxBox bioprocessing activities. Operating expenses will rise, due to the increase in the total number of employees to 600 in the financial year 2019.

The company’s commercial success will depend on acceptance of gene and cell therapy by the community and the regulatory and commercial environment several years into the future. This may impact the time and cost to develop gene and cell therapy products successfully. The success of a product candidate can be impacted by the emergence of new or unexpected competitor products and technologies, or the willingness of physicians and/or healthcare systems to adopt new treatment regimes.

A material impact on the future growth of the pharmaceutical and biotechnology industries might be felt by the decision of Britain to leave the European Union, as the post-Brexit fiscal, monetary and regulatory landscape in the UK is not clear. However, the company’s commercial pipeline remains robust, and its customer base continues to diversify, enhancing its revenue expectations.

Daily Chart as on September-04-19, before the market close (Source: Thomson Reuters)

In H1 FY19, the company performed in a disappointing manner in North America, driven by the extraordinary poor weather conditions. Though, the company expects to deliver full-year 2019 results widely in line with market expectations.  The company’s outlook is based on the active non-residential construction market, the anticipation that as the weather improves in the United States the clients are expected to return to more typical levels of productivity, healthy, and the high-level of confidence displayed by the clients. The company is also encouraged by the interest in the new products, which they expect will be a positive contributor in the second half of the financial year 2019.

In Europe, the company expects a solid rise in interest over the region, due to the demand for replacement equipment and technology upgrades, and also in new products.  However, the company anticipates the second half of 2019 trading in the area to decrease mildly and remain below the comparable previous year period driven by the concerns across longer-term economic uncertainty in the Europe region that they believe may affect purchasing decisions by the clients.  Across Europe, the company will continue to closely and carefully monitor the effect of these economic conditions on the markets.

In China, the company had decent growth in H1 FY19, reflecting the stabilising effect of local leadership of the China corporations. The long-term prospect in China hinges on the acceptance of and demand for quality by the market that has progressed at a slower pace than the initially expected.  The company will continue to closely monitor the effects of US and China tariff disputes and activity in the low-end productivity segment of the market going forward.

In the Middle East and Latin America, the company expect meaningful prospects and strong performance in the second half of 2019. However, it anticipates continued uncertainty in the Middle East region and does not expect the whole recovery of the H1 FY19 shortfall before the end of the current year.  In the Rest of World territories, the company looks to continue the strong H1 FY19 performance with the remainder of the current year and is also expecting the profit traction to continue in India.

Daily Chart as at September-04-19, before the market close (Source: Thomson Reuters)