BAE Systems PLC (BA) is a Farnborough, the United Kingdom-based defence, aerospace and security company with operations spread across the world, which seeks to protect people and national security, critical infrastructure and vital information by providing a range of services and products to its clients. The multinational company offers a broad range of advanced defence technology that covers air, land, naval forces and cyber domain with the help of an employee base of 85,800 people spread across over 40 countries. The operations of the group are differentiated in five operating segments, namely Platforms & Services (US), Maritime, Air, Cyber & Intelligence, and Electronic Systems. 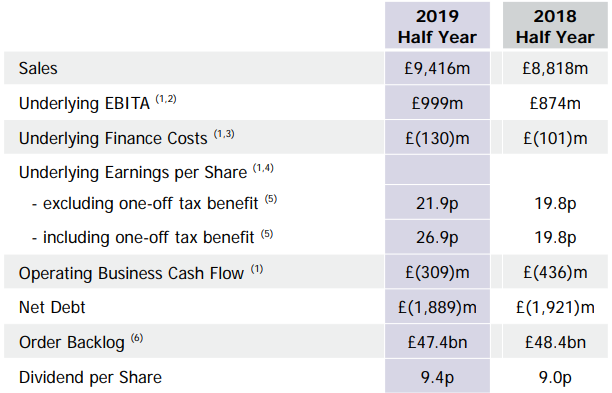 The company declared a 4.4% increase in the interim dividend to 9.4p for the half-year to 30 June 2019, and it intends to declare dividends in line with its policy of long-term sustainable cover of around two times underlying earnings. The ex-dividend date is 17 October 2019, and to shareholders registered on 18 October 2019, the dividend will be paid on 2 December 2019.

The future performance of the company in terms of revenue growth and bottom-line growth is expected to be bolstered by several crucial contracts which were secured in the financial year 2018, backed by position to address current and evolving priority programmes from its strong franchise positions in electronic warfare, precision guidance and seeker solutions. Research and development activities, diversified operations and growth in revenue are the major strengths of the group, and with established positions on the long-term programmes and a growing presence in other international markets, it has also made decent progress in improving the outlook and geographic base of the group.

Smiths Group PLC (SMIN) is a technology company headquartered in London, the United Kingdom, with operations in more than 50 countries, and it engages in inventing, designing and delivering solutions. The group develops, manufactures and sells control systems and instrumentation for industrial applications to customers based in over 200 countries and territories around the world; enabling industry, improving healthcare, enhancing security, advancing connectivity and supporting new homes. The operations of the group are differentiated in five operating segments, namely Smiths Medical, Smiths Interconnect, Flex-Tek, Smiths Detection and John Crane. 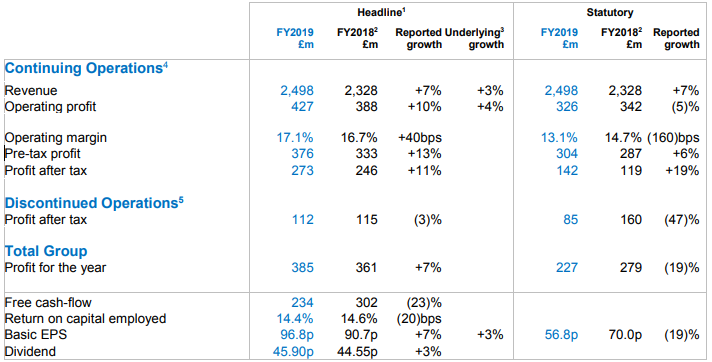 Bringing the total dividend for the year to 45.90p, the company declared a final dividend of 31.80p per share, which was in line with the objective to maintain minimum dividend cover of around 2.0x. To shareholders on the register at the close of business on 18 October 2019, the final dividend will be paid on 15 November 2019.

High return segments like Smiths Medical and John Crane, coupled with strong demand from the medical industry and growth market augur well for the company. Ageing populations with increasing personalised healthcare and patient expectation/quality of life, coupled with increasing healthcare spending in developing markets, has increased the demand for products offered by Smiths Medical. The company’s operations are impacted by the fluctuations in exchange rates due to sale and purchase done in multiple markets. Regulatory changes and the imposition of tariffs on trade between the UK and the Eurozone poses a severe threat to the company as well