The company was founded in 1987 and has its registered office in Jersey. It has operations in about 17 different countries including Africa, Europe, the United States of America, and in the Cayman Islands.

The company’s share was admitted to the London Stock Exchange for trading on 14 March 2018, where they trade with the ticker name JTC.

The company on 17 September 2019, published its interim results for the half-year period ended 30 June 2019. 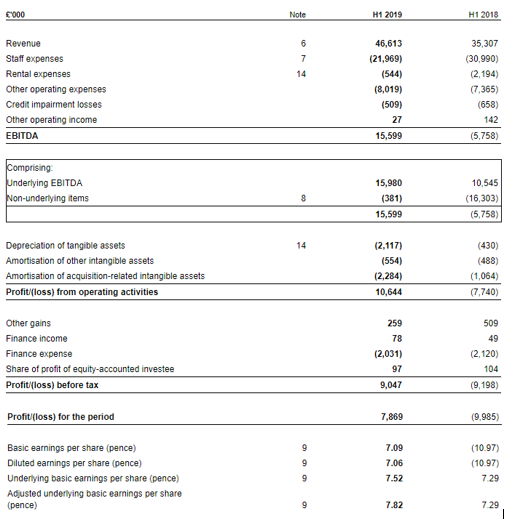 The company’s performance for the first half-year period remained in consonance with its guidance of the full-year net organic growth in the range of 8-10 per cent and is on track to continue into the second half aided by a strong pipeline of new assignments won since the end of the reported period.

An amenable resolution of Brexit remains a key issue for the company; however, the company is well-organised and well-positioned to navigate through any type of macro-environmental scenario and take advantage of any opportunities which may arise as a result of any changes that may occur in the geopolitical and economic landscape in Europe. The company is trading as per the Board expectations, and it is confident to carry on this momentum into H2 2019 as well.

Motorpoint Group Plc is the United Kingdom domiciled largest independent retailer of vehicles. The company’s main business activity is the sales of nearly new motor vehicles, which are no more than two years old and which have no more than 15,000 miles of mileage on them. The company operates through 12 retail sites spread across the United Kingdom; Glasgow, Newport, Derby, Burnley, Peterborough, Chingford, Birtley, Castleford, Birmingham, Widnes, Oldbury and Sheffield. Out of the above five have opened in the past five years; along with a national contact centre which deals with online enquiries. The company is responsible for selling vehicles from brands representing over 95 per cent of all new vehicle sales in the United Kingdom, with models from Volkswagen, Nissan, Hyundai, Audi, Ford, Vauxhall and BMW being amongst the top sellers.

The shares of the company have their listing on the main market segment of the London Stock Exchange, where they trade under the ticker MOTR.

The company on 8 October 2019 came out with its half-year trading update ahead of its interim results release for the six-month period ending 30 September 2019.

The Board of the company remains confident that their full-year expectations will be met. The company is confident that its recent trading performance and strong current stock profile makes it well placed to continue to expand its market share while its management continues to evaluate the further potential of new site opportunities.

Consort Medical Plc is the United Kingdom domiciled leading, global, supplier of single-source pharma services drug and delivery devices. The company has two subsidiaries namely; Bespak - It is a leading manufacturer of devices for the point of care diagnostics market and also a global market leader in the manufacture of drug delivery devices for pharmaceutical partner companies, including injectables, respiratory, nasal and ocular products. Aesica - It is a prominent supplier of finished dose manufacturing services and active pharmaceutical ingredient (API) development services to pharma partner companies of Aesica.

The shares of the company have a listing on the London Stock Exchange in the main market segment where they use the ticker name CSRT for trading.

The company on 18 October 2019 came out with a trading update regarding the commercial agreement for the development of the company’s proprietary VapourSoft technology with Regeneron Pharmaceuticals, Inc., a leading global biopharmaceutical company.

The commercial agreement with Regeneron Pharmaceuticals, Inc. underpins the potential applicability of the proprietary VapourSoft technology as a power source for auto-injectors and the potential for its incorporation into devices where conventional systems may not be suitable.