The results announcements of the companies have a direct bearing on the movement of their stock prices on the exchanges, either upward, downward or sideways, based on the outcome. As buyers look for value, and if the result exceeds the expectations, the demand increases for the stock, while in case of disappointments in earnings, the investors tend to move their money out of it. Here we are going to discuss two companies operating in two different sectors, which came up with their latest results recently that impacted their stock price movements.

Alternative Investment Market-listed Renalytix AI Plc (RENX) is engaged in providing Artificial Intelligence backed kidney diagnostic services. On November 06-2018, shares of the company got admitted to the AIM segment of the London Stock Exchange for trading. 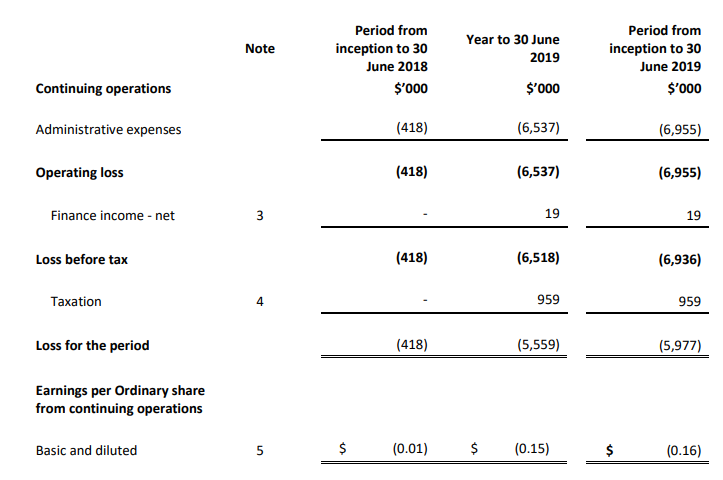 In the financial year 2019, the company completed a successful IPO securing around $27 million of net capital financing with admission to AIM and trading in the groupâs shares starting on 6th November 2018. In-licensed IP (intellectual property) underlying two product technologies, FractalDx and KidneyIntelXTM, for a total consideration of $11 million in upfront payments. The capital investment was of around $2 million to date during the AI technology (artificial intelligence) and clinical assay advancement. For the period since inception on 15th March 2018 to 30th June 2019, the net loss stood at $6 million, and basic & diluted loss per ordinary share from continuing operations was $0.16. Since its inception to 30 June 2019, cash used in operations was $4.4 million. In FY2019, as of 30 June 2019 cash on hand stood at $9.3 million.

The U.S. FDA (Food and Drug Administration) awarded Breakthrough Device designation in May 2019 for KidneyIntelXâ ¢, the groupâs AI clinical in vitro diagnostic product for identification of fast progressing kidney disease. For KidneyIntelXâ ¢, the tenable contract agreements, de-identified electronic health, and patient blood samples record data extended clinical validation through the University of Pennsylvania, Emory University, which was one of the participating academic institutions. For KidneyIntelXâ ¢, the company recognised a Chronic Kidney Disease Advisory Board through clinical specialists from the Icahn School of Medicine at Mount Sinai, Wake Forest Baptist Health, Harvard, Johns Hopkins, and Northwestern University. With the University of Groningen, the company initiated a collaboration to evaluate KidneyIntelXâ ¢ in 3,500 patients with type two diabetes for initial identification and guiding therapeutic treatment for kidney disease. For FractalDx technology, the company announced positive results, demonstrating the ability to forecast initial refusal in kidney transplant.

On 23rd July 2019, the company completed successful follow-on financing of net $16.6 million, with placing of new ordinary shares to an array of new and existing institutional investors from the United States and the United Kingdom. The company continues to work with FDA under Breakthrough Device designation for KidneyIntelXTM and hopes to put it for regulatory clearance by the final quarter of 2019.

Renalytix AI Plc has made decent progress in its product line and secured substantial financing to support its operations and has gathered significant agreement for its core product KidneyIntelXâ ¢ and implemented an exclusive license for FractalDx portfolio of technologies in the area of kidney transplant rejection.

The companyâs immediate plan remains focused on expanding involvement from world-leading clinicians, building pathways to insurance payer reimbursement in the United States, incremental product development, and regulatory authority engagement. The companyâs in vitro diagnostic programme for finding fast-progressing kidney disease, KidneyIntelXâ ¢, which was granted Breakthrough Device designation from the U.S. Food and Drug Administration (FDA), has the potential to address one of the largest unmet medical needs globally.

Daily Chart for the last year as on 03-September-19, before the market close (Source: Thomson Reuters)

Despite the progressive move executed by the company, at the current trading level, its share price has already been stretched. Also, since the group proposed to raise fresh capital through the issue of new ordinary shares, its stock is showing a downtrend, and at the current trading level, the stock was quoting substantially below its 30-day and 60-day simple moving average price and the 14-day RSI of the stock which was hovering in steep oversold zone, is strengthening the downside potential in the stock. 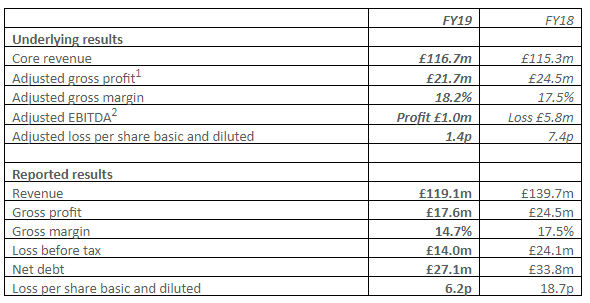 On a reported basis, the companyâs revenue in the year ended 30th April 2019 stood at Â£119.1 million, a decline against Â£139.7m in FY18, due to the companyâs decision to strategically exit the Away from Home market and other low margin contracts. On a like for like (LFL) basis, FY2019 revenue was almost the same against the prior year. All other main earnings figures presented material development on the financial year 2018. The loss at EBITDA level decreased by Â£10.5 million to a loss of Â£8.2 million against the loss of Â£18.7 million in FY18. Loss Before Tax reduced by Â£10.1 million to Â£14 million as compared to loss of Â£24.1 million in FY18. Adjusted Loss Before Tax stood at Â£2.8 million in FY19 versus loss of Â£9.1 million in FY18. These substantial improvements were achieved in spite of adverse headwinds in tissue prices and negatively impacting foreign exchange the financial year 2019 results to the tune of Â£10.8 million.

Non-recurring costs, mainly associated with the turnaround process, totalled of Â£7.9 million in FY19 versus Â£12.9 million in FY18. This was driven by the complex nature, speed and scale of the restructuring. The companyâs balance sheet had stabilised, in spite of the substantial level of expenditure on turnaround costs and investment in adding capacity, with a keen focus on controlled investment, restored cash profitability, and working capital management. On 30th April 2019, the net debt declined by Â£6.7 million to Â£27.1 million as compared to Â£33.8 million in FY18.

The loss of a major customer; Parent Reel and pulp capacity and pricing; New entrant into Market; Winning a large customer contract; Volatility of foreign exchange rates; the groupâs dependence on IT systems in its day to day operations; and failure to adhere to regulatory requirements such as taxation, the Data Protection Act, Health and Safety and Fire safety regulations in particular.

The company operates in the household industry, which requires continuous investment, sometimes at the cost of profitability, to stay ahead of competitors. The company's exposure to the thriving discount retail segment is robust than it has ever been, and the company is growing the presence amongst the main grocery retailers.Â The consumers shift from more expensive established brands to best value products is accelerating, and the company remains well-positioned to capitalise on this trend.

In H2 FY20, the attention is focused on helping more customers deliver the best value for the price paid on tissue products.Â Profitable growth is its priority, as it is trying to match the production capacity to significant market demand and stakeholders' growth expectations.

The investment is projected to be funded with lease financing, but the company still anticipates net debt at 30th April 2020 to be slightly lower than at 30th April 2019, given projected levels of cash generation. In early 2020, the new line is planned to be commissioned.

Brexit related uncertainties can increase the interest costs for the company and has led to the curtailment of expansion plans in its home market. The company is also exposed to significant risks from large volatility in the household business.

Daily Chart for the last year as at 03-September-19, before the market close (Source: Thomson Reuters)