LiDCO Group PLC (LID) is a London-headquartered company which is engaged in the development, manufacturing and sale of cardiac monitoring equipment, and supplies non-invasive and minimally invasive hemodynamic monitoring equipment to hospitals. Its products are used to ensure that vital organs are adequately oxygenated and monitor the amount of blood flowing around the body and are useful in the treatment of high-risk patients in both the operating theatre and critical care units. The operations of the group are differentiated in five segments, namely UK – LiDCO products, UK – third party products, USA, Continental Europe, and Rest of the World.

On 15 October 2019, at the time of writing the report (at 2:47 pm GMT, before the market close), LID stock was trading at GBX 4.2, up by 7.69 per cent against the previous day closing price. Stock's 52 weeks High and Low is GBX 5.50/GBX 3.29. The company’s stock beta was 1.21, reflecting more volatility as compared to the benchmark index. The outstanding market capitalisation was around £9.55 million.

The company seeks to build shareholder value through the commercialisation of LiDCO monitoring systems and aims to expand geographically to address the global opportunity for sales of its technology. It believes that the amount of repeat revenues generated from customers would increase as the numbers of productive LiDCO-enabled monitors increases and continue to invest in research and development to ensure its leadership in technology and deliver further differentiation. While it expects to maintain its leadership position in the UK, it aims to accelerate revenue growth in the US as it is the largest market for hemodynamic monitoring and has invested in commercial operations. It also continued to make good progress with its High Usage Programme in the US and reported that for new HUP accounts, there is a substantial pipeline of advanced opportunities, which augurs well for the company.

Inland Homes PLC (INL) is a Beaconsfield, the United Kingdom-headquartered brownfield regeneration specialist, which is principally engaged in acquiring residential and mixed-use sites that opens up medium-term opportunities that are significantly less capital intensive by focusing on self-delivery of projects. The portfolio of the company consists of both brownfield and strategic sites, and the longer-term strategic land bank has the potential for approximately 2,170 residential plots, which would be enhanced through obtaining planning permissions for residential and mixed-use developments.

In the 15 months ended 30 September 2019, revenue increased to £151 million from £150 million in the prior year, while forward sales were reported at £41.6 million, against £20 million in the previous year. It’s land bank stood at a record 7,796 plots of which 3,068 have planning consent, and with 577 plots sold in the period, demand for consented housebuilding land remained strong. Net debt stood at £155 million versus £80 million last year, and cash available with the company was £9.5 million. With an average selling price of £250,000, the high-quality homes continued to sell well, and it currently has 889 private homes and 578 partnership housing equivalents under construction. 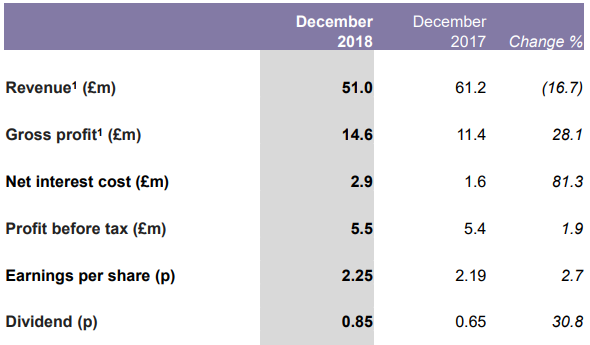 By early in the new financial year, the company expects to secure the first build to rent opportunities, helped by a substantial number of highly sustainable sites suitable for rental housing. Consumer confidence, demand and pricing for new homes can be impacted by Brexit, while costs of materials for the group can also increase, and a further potential devaluation of the sterling as a result of Brexit can affect revenue, profits, cash flows and asset values. While the general market is supported by low mortgage rate and growth in wages, coupled with continued demand across the core activities of the group, deterioration in economic environment can decrease demand and pricing for new homes.

Vesuvius PLC (VSVS) is a London-headquartered global leader in metal flow engineering, principally serving the steel and foundry industries by developing and manufacturing high-technology products and solutions for supply to the steel and casting industries. The operations of the group are differentiated in two operating segments, namely Steel and Foundry.

The company reported that end markets continued to weaken further, particularly in the EMEA region, and challenging market environment highlighted at the half-year results has continued into H2 2019. The board now estimates trading profit (EBITA) in 2019 to be between £180-190m, following a review of Q3 2019 results and an update of its forecasts for Q4. The management remained focused on its cost optimisation plans, and the group reported that since the end of June, steel producers had announced annualised production cuts equivalent to approximately 4% of 2018 volumes. However, the group remains confident in its ability to achieve a 12.5% return-on-sale in the long term, and it does not expect a structural change to the positive, long-term fundamentals of its end markets.

On 15 October 2019, at the time of writing the report (at 2:52 pm GMT, before the market close), VSVS stock was trading at GBX 337.60, down by 18.92 per cent against the previous day closing price. Stock's 52 weeks High was GBX 646.00, and it touched a fresh 52 week low during the day’s trade. The company’s stock beta was 1.20, reflecting more volatility as compared to the benchmark index. The outstanding market capitalisation was around £1.13 billion, with a dividend yield of 4.80 per cent.

Though the company remain optimistic that it would be able to continue delivering growth in the long-run, with no structural changes in the industry, the short-term expectations remain bleak, and the IHS Markit lowered its 2019 light vehicle production forecasts and it now forecasts a decline of 5.6% versus 2018 compared to a 4.2% decline previously. The group has launched a set of restructuring initiatives targeting its manufacturing network, which are expected to deliver savings of £17.6m in 2019, £18.2m in 2020 and £5.0m in 2021. It does not expect a recovery in H2 2019 as it continues to experience challenging end markets which were seen in H1 2019.