US Market News: The major indices of Wall Street traded in a red zone after an unexpected rise in oil stockpiles reported by EIA. Among the gaining stocks, Acuity Brands (AYI) shares surged by around 12.20% after the Company’s quarterly earnings and revenue remained more than the consensus estimates. Palantir Technologies (PLTR) shares rose by around 2.83% after the Company won an army contract worth approximately USD 823 million. Among the declining stocks, Seagate Technology Holdings (STX) shares dropped by around 6.17% after Morgan Stanley downgraded the Company to “equal weight”. Constellation Brands (STZ) shares went down by around 0.59% after the spirits maker’s quarterly earnings fell short of the consensus estimates.

UK Market News: The London markets traded in a red zone after the release of UK construction PMI data. According to the recently available data from IHS Markit/CIPS, the UK construction sector got hit by a shortage of raw materials & staff, and PMI stood at ~52.6 during September 2021, down from ~55.20 recorded in August 2021.

Tesco shares climbed by about 5.95% after the Company had announced a £500 million share buyback and raised the full-year profit guidance. Moreover, the Company had declared an interim dividend in line with the prior year.

Imperial Brands shares dropped by around 3.19% after the Company released a trading statement mentioning ongoing market trials with heated tobacco in the Czech Republic and Greece and blu in the US.

Topps Tiles had anticipated full-year adjusted profit before tax to remain above the consensus estimates and expected to resume dividend payments by the end of the year. Furthermore, the shares grew by around 1.21%.

FTSE 250 listed TUI AG shares dropped by around 1.29% after it launched a 1.1 euro billion capital increase to strengthen the balance sheet. 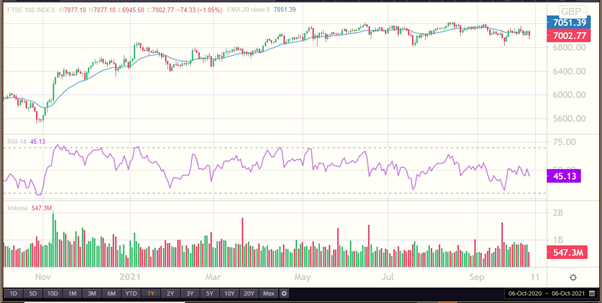