The Bank of England (BoE) has been under pressure from the investors to lift the restrictions on banks to issue dividend payouts to the shareholders. Several fund managers have request the BoE to raise the impediment on dividends by early 2021 as the coronavirus pandemic has brought significant pressure on the shares.

The plea from the investors followed the decision by the European Central Bank (ECB) recently said it might allow some lenders to start paying dividends to the shareholders after December 2020. It is to be recalled that the restrictions on issuance of dividend payout was brought into effect in April 2020 after the coronavirus pandemic struck early this year.

Views from the experts

Some fund managers believed that they the ECB’s plan seemed logical and a move in the positive direction. They viewed that it was crucial that the dividends make a comeback and some banks are also pushing on this. The fund managers stressed that banks have clarified on this stand that in case their balance sheet was in a position to issue the dividends, then the board needed to decide on it. Issuance of dividends need not be a political decision.

Many investors and fund managers agreed that dividends are one of the prime and potential attractive features for investments made in a bank. In alignment with the argument presented by the investors some banking industry insiders have also pointed out earlier in 2020 that the restrictions were needed to be lifted.  They said that in order to facilitate the banking industry to attract investments, it was important to issue dividend payouts.

On the other hand some experts still remained skeptical on removing the restrictions on dividends in the wake of the economic fallout from the pandemic as well as a no-deal Brexit. They opined that it was sensible to suspend the dividend payout by the banks at least till the spring of 2021 and possibly longer.

A closer look at events 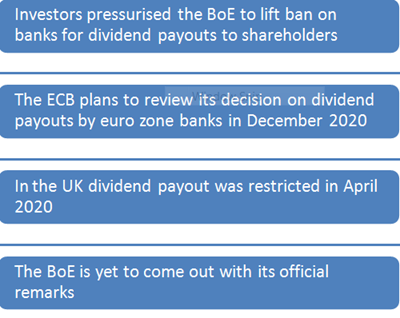 The ECB on 11 September 2020 said that it would rethink its earlier recommendation for banks in the euro zone on halting the dividends payouts. Yves Mersch, the board member and deputy head of the supervision arm at ECB, indicated that it might take a more flexible and case-by-case approach. Mersch informed that the ECB would review the decision in December 2020 and if it finds that the capital estimation at the banks look certain, then it would revert to its standard supervisory norm of assessing planned distributions of dividends on a bank-by-bank basis.

It is to be recalled that earlier in 2020, the ECB had asked the euro zone banks to stop share buybacks and dividend payments as a recession led by the coronavirus pandemic was expected to drain much of their capital available with them. Various policymakers presented the argument that it would not be right to pay the shareholders as banks received benefits from various public subsidies and guarantees. So, it was important that the banks could keep lending to the real economy. Talking about this recommendation, Mersch stressed that this needed to remain exceptional and temporary.

It is to be noted that the banks at large have followed the ECB’s recommendation, which is not binding. However, in case of non-adoption it risked attracting closer scrutiny and other binding requirements from the ECB.

Also read: BoE Raises Doubts On The UK PM’s Campaign To Get Workers Back To Office

It is to be recalled that it was during the coronavirus-induced lockdown month of April 2020 that many of the leading names in the banking industry from the UK stopped the dividend payout to the shareholders and held on to the cash available with them for any need arising during the pandemic. At that time, the BoE had appreciated the decision by the banks and additionally requested the banks to stop any payment of bonus to their senior staff members.

It is to be noted that some of the leading banks such as NatWest, Santander and Barclays, were due to release billions in dividend pay out to their shareholders. Other leading banks in the UK, including Lloyds, Royal Bank of Scotland, Barclays, HSBC, and Standard Chartered were expected to pay a total of £15.6 billion to the shareholders, as per media reports.

Also read: 5 Dividend Stocks to Look at For Retirement Planning

Sam Woods, the deputy governor of BoE had written to some bosses at the banks asking for halting the dividend payments. The Prudential Regulation Authority (PRA), a part of the BoE, had mentioned that it was a sensible effort as banks would be required to play a major role for assisting the wider economy during the economic crisis led by the pandemic. The PRA at BoE looks after regulation and supervision of approximately 1,500 banks, building societies, credit unions, insurers, and other investment firms.

Some experts observed that the banks did a right thing by retaining their capital during the crisis situation as it was likely that there could face losses on existing loans and the banks would need to create a buffer to save their deposits as well as keep operating. During the financial crisis of 2008, many banks faced criticism for paying dividends and thereafter required bailouts. After this crisis, banks were compelled to keep additional capital to avoid any need for getting public money.

The BoE is yet to come out with its official statement on the request from the investors to lift the ban on banks to restart issuing dividends to its shareholders. Many investors highlighted the recent decision by the ECB to review its earlier decision on the euro zone banks to stop the dividend payouts in December 2020. It is important to note that the ECB has mentioned that if it finds that the capital estimation at the banks look certain, it would revert to its standard supervisory norm of assessing planned distributions of dividends on a bank-by-bank basis.

The decision to ban dividend payouts was intended to preserve cash for the situation arising out of the coronavirus-led crisis and become one of the potential saviours of the crisis. It was expected that the cash saved would help in the future when banks would be required to issue overdrafts and other funding required by the companies as the pandemic decimates.