Cora Gold Limited has announced additional results from its drilling campaign at the company’s Sanankoro Gold Project in the Yanfolila Gold belt in southern Mali. The purpose of this drilling programme was to target the shallow oxide extensions beyond the maiden resource footprint of 5.0 million tonnes (Mt) at 1.6 g/t Au for 265k ounces of gold. The scope of this activity included the North Sanankoro Reconnaissance Exploration and the Zone C Area Reconnaissance Exploration of the Sanankoro complex.

These latest results followed initial results from the same drilling programme announced on 11 February which focussed on Zone A, Zone B North, Selin and Zone B areas within the Sanankoro complex.

The company reported that the latest results identified the presence of significant mineralised extensions beyond the existing Resource footprint at Sanankoro and importantly, discovered a new 1,500m long gold structure representing a continuation of Zone B North and 500m of new mineralisation identified along strike to the west of Zone C.  The company noted that this was particularly encouraging given that the shallow drilling undertaken is only designed to provide a guide to the location of the structures.

The company also noted the similarities between the new 1,500m long gold structure and early results obtained from Selin, before deeper holes were drilled, which ultimately resulted in a Maiden Resource being declared.  This highlights the potential for additional ounces to be delineated outside of the footprint of the maiden resource.

The company also highlighted the following results from the drilling programme:

It was reported that as per the earlier release issued on 16 January 2020, the permit for the Sanankoro permit area, being one of the five areas which combined form the wider Sanankoro Gold Project, had expired on 1 February 2020 as per the Mining Code of Mali. The company confirmed that the application for the award of a new permit had been submitted before the expiry and the award for the new permit will be announced in due course. The permits over the further four areas which comprise the Sanankoro Gold Project, being Bokoro, Bokoro Est, Dako II and Kodiou, are due to expire between 2022-2026. 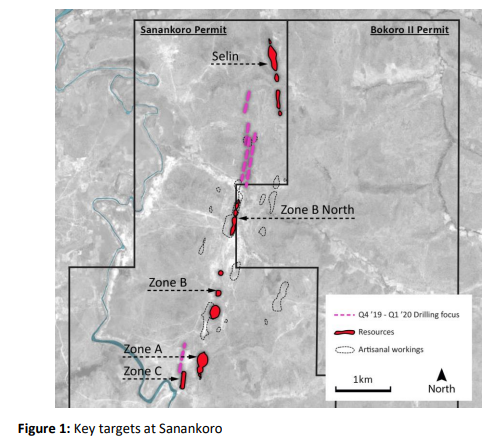 (Source: Thomson Reuters) Daily Chart as on 28-February-20, before the closing of the LSE Market

These latest drill results at its Sanankoro Gold Project have highlighted the company’s operational success in terms of discovery and exploration of gold in the region and supports its primary strategy of developing a standalone mine in the Sanankoro area.