Digitalbox plc announced that it had started a partnership with top video platform christened NextUp. Started in FY 2016, NextUp is a global on-demand video platform which is paid subscription-based. The platform colloquially is termed as "The Netflix of UK Stand-Up". The video platform specialises in comedy. As per the deal between the two parties The Daily Mash would dispense video content mainly of small size. The source of the small comedy videos is the NextUpâs extensive collection from social media source and website. NextUpâs collection is the best source for satirical items in the United Kingdom. Overall the company gets over three and a half million clicks on a monthly visit. Also, on the social media network, the company has almost a lakh of followers. The deal is significant as the joint forces would increase the combined subscriber base of the company for its satirical short videos. The deal would also enlarge the library of content with the comedians from stand-up genre performing in the United Kingdom. As a result, this would create a brand-new source of revenue from advertising. Our bullishness on this joint business venture is because The Daily Mash and NextUp have under its belt the best shows and videos related to humour and satire. On the British Broadcasting Corporationâs channel two, The Daily Mash has a long-running show named, Mash Report for more than ten years. The show witnessed steady growth in audience and also received a The British Academy of Film and Television Arts nomination. On the other hand, NextUp focuses on the broad range of comedy ranging from observationalists; surrealists; storytelling; character comedy; the art of sketch; merchants of the gag; and others. The smart thing done by the company is that they have a rule of equal sharing of revenue with the performers of the comedy shows. The subscribers would also find in the list of videos consists both of established names and new ones.

Daily Chart as at August 2, 2019, before the market close (Source: Thomson Reuters)

IXICO Plc (LSE: IXI) is a health company focused on the human brain. Main areas of attention by the company are Parkinson's disease; Huntington's disease; Alzheimer's disease; adolescent mental health; and human behavioural health. The main source of revenue of the company comes from pharmaceutical and health companies through the service of clinical trials to them. The main products of the company are TrialTracker; mehealth; Assessa; and MyBrainBook. Of the above platforms, TrialTracker engages in real-time study or trial related to medicine through a web-based application. The platform also engages in preparation of products associated with the digital health space. mehealth is online software which helps to increase the effectiveness of treatment and monitoring of patients, assisting clinicians. Assessa helps to find the reason behind health problems and helps in smart decisions by doctors and healthcare professionals. MyBrainBook is related to dementia and its treatment value chain, which it provides through a platform digital. 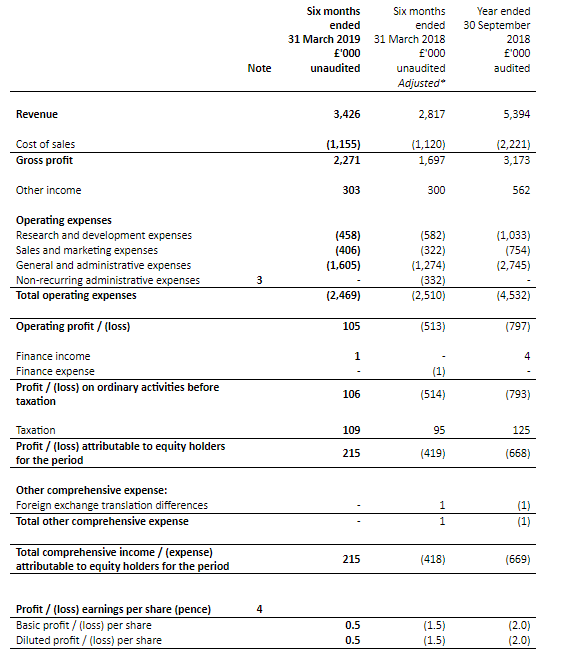 IXICO a British pure play can well be classified for its operation in a space which has significant opportunities. It targets the lucrative market of the data analysis of the human brain. The recent trends support our bullishness about the company in the first half of the financial year 2019; new contracts were bagged by the company worth Â£5.2 million. This shoot its total order book value to Â£21.2 million. The order book is bulging as the biotechnology and pharmaceutical niche space where it operates is steadily gaining more traction. As per management estimates, the order book supports its FY 2019 topline growth expectation year over year by twenty per cent. To attain this, the company in the H2 FY 2019 plans to speed up the rate of its capital expenditure to increase its production capacity and expand its infrastructure. A key focus has been on Huntingtonâs disease, a rare genetic neurodegenerative disorder that affects movement, cognition and behaviour. In FY 2018 around a quarter of IXICOâs revenues were generated from Huntingtonâs disease contracts. This is set to rise following a number of notable contract wins. Also, the focus on higher spending on the research and development domain was kept constant by the management of Ixico. Its modus operandi is the rapidly growing neurology space. In terms of operation ability, the clinical trial imaging market can be segmented into magnetic resonance imaging, computed tomography, x-ray and ultrasound, echocardiography, positron emission tomography, and others. In terms of end-use, the market can be segmented into pharmaceutical, medical device manufacturing, contract research organization, and others. In terms of region, the clinical trial imaging market can be segmented into North America, Asia Pacific, Europe, Middle East & Africa, and South America. Among all, Asia Pacific is predicted to be the most attractive market owing to large presence of pharmaceutical & biotechnology industries as well as contract research organizations in the region. As per market experts, the worldwide neurology market was approximately USD 182.9 billion in FY 2017 and is expected to grow at a compounded annual growth rate of 3.5 per cent. It is expected to breach the barrier of USD 34 billion by FY 2024. The lionâs share will go the outsourcing plays like Ixico in the biopharmaceutical value chain. This is because Ixico provides specialist data analysis services to a wide range of stakeholders in the neuroscience trial ecosystem. Ixico management estimates that this market is worth over Â£100 million annually.

Daily Chart as at August 2, 2019, before the market close (Source: Thomson Reuters)