Barclays Under Pressure From Investors To Cut Fossil Fuel financing

According to a statement from U.K. investment lobby group, Share Action, over 100 individuals and eleven institutional investors have requested Barclays to phase out financing Energy firms or stop providing all financial assistance to firms which do not conform to the climate goals put forward in the Paris Agreement.

Barclays is facing pressure at that time when activists and shareholders are requesting the company to invest in green technologies and do more in tackling the climate crisis. Natasha Landell-Mills who signed the resolution and is the head of stewardship at Sarasin & Partners said that incapability to shun polluting industries has exposed the bank and its shareholders to increased funding risks as decarbonisation gains pace.

Till now, the investors concentrated on large oil and gas companies accountable for delivering fossil energies, with pledges at companies which include BP, Royal Dutch Shell and Equinor. But for the first time in history, the company’s resolution makes it the first European bank to have encountered such investor engagement on fossil energy financing. It requests upon Barclays to move beyond as compared to past priorities to tackle climate change by pushing it to establish quantifiable objectives.

The team of eleven investors openly supporting the Barclay’s resolution which handle around 130 billion pounds of assets in aggregate, which include LGPS Central, Brunel Pension Partnership, Folksam and Sarasin & Partners, as well as one of the bank’s twenty biggest shareholders.

On climate protests, Barclays said that it is helping the cause for tackling climate change, which is influencing the world’s weather aggressively, and it provides updates regularly to Share Action and the other shareholders about its progress. However, Barclays faced much blame for its ongoing relationship with fossil fuel companies. In January 2019, Barclays stated that it would curb its coal financing business internationally by halting direct financing of greenfield thermal coal mines and suspending such funding of construction or expansion of coal-fired power stations.

In the beginning of September 2019, Barclays has been one of the signatories to the United Nations’ Principles for reliable banking, which began to bring in line finance firms with international efforts to tackle environmental transformation along with other social issues. However, the bank did not align itself to thirty-six businesses which were involved in signing the Collective Commitment to Climate Action. This includes taking actual measures to finance an economy which thrives on low carbon usage, that is required to restrict global warming to below 2 degrees Celsius. The bank further stated that it has financed 27.3 billion pounds ($35.8 billion) in renewable energy financing and green bonds in the year 2018. According to Bloomberg, it placed as the 10th biggest facilitator of green bonds in the year 2018.

Barclays Plc (LON: BARC) is a holding company for International financial services. It also manages, invests, lends and safeguards wealth for clients worldwide. The company is a part of the foundation of the United Kingdom, where it supports 23 million people and almost one million firms. The company purpose and value are to establishing chances for people to grow. The company participates in wealth management, wholesale banking, credit cards, investment banking and investment management services.

On 25th October 2019, the company declared its the nine-month and third quarter financial information for the period ended 30th September 2019.

The company further stated that firming up of the USD/GBP foreign exchange rate in the third quarter of 2019, while increasing impairment and costs, provided a good fillip to revenue and earnings. 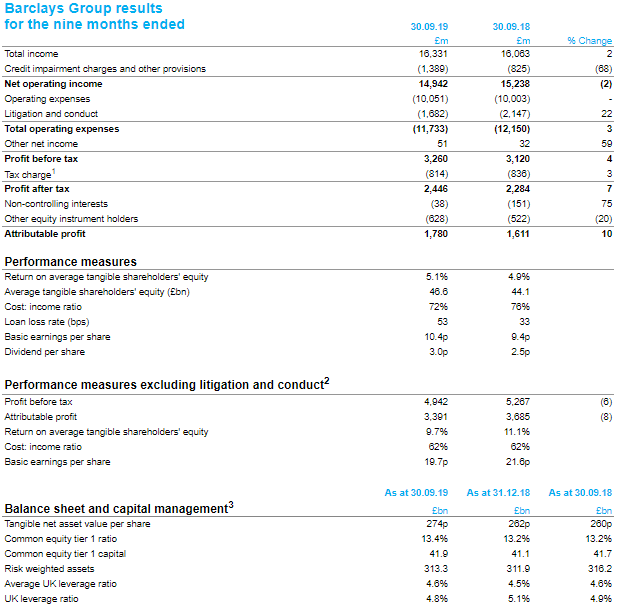 As on 08th January 2020, at 09:59 A.M GMT, by the time of writing, BARC share price was reported to have been trading at GBX 182.02 per share on the London Stock Exchange, a decline in the value of 0.61 per cent or GBX 1.12 per share, in comparison to the previous day’s closing price, which was reported at GBX 183.14 per share. The company’s market capitalisation was reported at GBP 31,723.62 million with regards to the current stock price.

The beta of the BARC has been reported to be at a value of 0.8592; it indicates that the movement in the price of the stock of the company is less volatile, as opposed to the movement of the comparative benchmark index in the previous one year.