Broadly speaking, companies having a market cap of less than NZ$2 billion are referred to as small-cap stocks. Though, being small, these companies boast exponential growth potential and are likely to flourish with time and offer attractive returns to their shareholders. 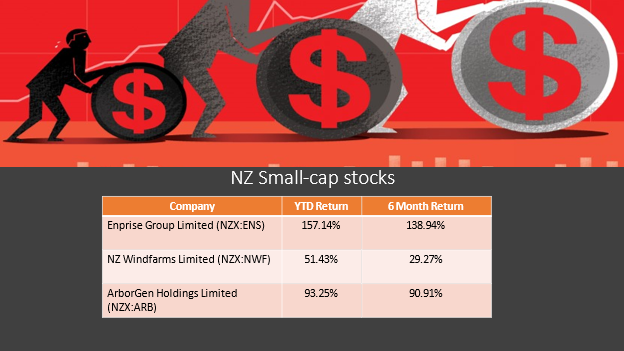 Enprise Group Limited, which has a market cap of more than NZ$32 million, is an investment vehicle for high-tech growth-oriented companies. Owing to stable growth across its core businesses, the Company witnessed a strong FY21 financial performance.

Hence, it rewarded its shareholders by paying a dividend of 2.5 cps on 21 September.

Also, AUD 0.9520 was the foreign exchange rate fixed by Enprise Group for the dividend payment.

At the time of writing, Enprise Group was trading flat at NZ$2.020, on 24 September.

NZ Windfarms Limited has a market cap of over NZ$70 million. Recently, the Company announced holding a physical Annual Meeting of its shareholders in Auckland on 27 October.

However, if NWF is prevented to hold an in-person meeting on account of restrictions and limitations on public gatherings, the Company will conduct an online Annual Meeting.

Also, the Board has urged its shareholding to send nominations for the post of directors latest by 7 October.

At the time of writing, NZ Windfarms was trading flat at NZ$0.24, on 24 September.

Must Read: What has been last 6-month returns for 5 NZX penny stocks?

ArborGen Holdings Limited is a globally acclaimed supplier of commercial seedling and advanced genetics for the forestry sector and has a market cap of about NZ$150 million.

In Its ASM held previous month, resolutions were passed to re-elect Ozey Horton and Thomas Avery as its directors as well as to elect David Knott Jr as the Company’s director.

Another resolution was passed to authorise the Board to determine ARB’s auditor’s fees for the forthcoming year.

Related Read: Look at these 5 cheap NZX stocks under 50 cents

Though relatively low priced, small-cap stocks generally generate higher returns for their investors for they aim at bringing new products and services to the market or altogether creating a new market.