For any country, infrastructure companies are the enabler of its economic growth. Airports, roads, railways, electricity, construction, and property companies are the very backbone on which a modern economy prospers.

Having said that, here are the five popular NZX-listed infrastructure stocks. 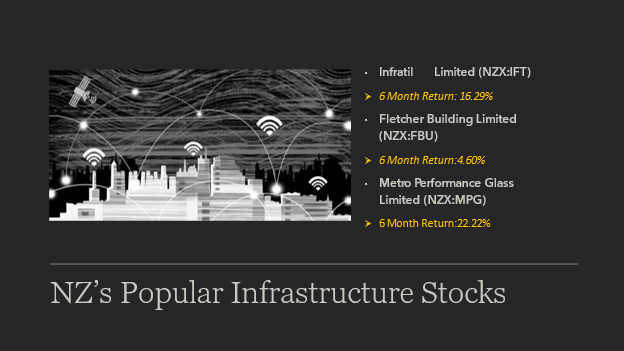 It is noted that the Gurīn Energy project would invest in developing wind and solar PV energy projects across Asia.

Founded in 2001, Fletcher Building Limited functions across the entire building supply chain. FBU has revealed to hold an online ASM on 19 October.

The said meeting would be held through the Computershare Meeting Platform.

NZ’s leading glass supplier is Metro Performance Glass Limited. Recently, the Company provided an update on its first-half performance, which has been hugely impacted by the ongoing COVID-19 crisis.

Lockdowns across NZ have resulted in significant uncertainty, disruption as well as product shortages across MPG’s domestic construction supply chain.

This is likely to impact the industry for several months, plus, additionally being affected by the increased costs due to international glass supply and shipping delays.

Hence, the Board has decided to defer the recommencement of dividends, which earlier were expected to be announced in November, when MPG's interim performance would be revealed.

Steel & Tube Holdings Limited is the country's renowned name for providing steel solutions. Owing to the ongoing uncertainties associated with the COVID-19 situation in New Zealand, STU has scheduled an online ASM for 30 September.

On 24 September, at the time of writing, Steel & Tube Holdings remained unchanged at NZ$1.04.

Do Read: What are 5 small-cap NZX stocks examples?

MHM Automation Limited is famous for building and distributing automated equipment for the logistics and food processing sector. On 29 October, the Company is planning to organise its Annual Meeting in Christchurch.

For this, director nominations can be sent by 28 September.

For a rock-solid foundation and progression of an economy, a robust infrastructure sector is a necessity, without which nation would face difficulty in its growth and advancement.