The healthcare shares are generally considered as defensive ones, and at this time of turmoil, healthcare sector companies are more involved in R&D activities and coming up with technologies to prevent and treat COVID-19. At present, there are numerous opportunities in the healthcare sector, and hence several players in this industry are gaining investors’ attention this reporting season.

Listed on both NZX & ASX, AFT Pharmaceuticals Limited is engaged in the production of a wide variety of products; both developed the Company and in-licensed from 3rd parties. Products of AFT Pharmaceuticals cover all key pharmaceutical distribution channels including over-the-counter (OTC), prescription and hospital.

On 30 July 2020, AFT Pharmaceuticals updated the market that it had signed an exclusive Maxigesic IV® licensing as well as supply agreement for six European countries- Cyprus, the Czech Republic, Bulgaria, Romania, Slovakia, and Hungary with a combined population of almost 53 million.

ALSO READ: Strong Lift in Revenue and Earnings for AFT Pharmaceuticals in FY20

AFT Pharmaceuticals signed the agreement with a Cyprus-based multinational pharmaceutical company- Medochemie, who has already signed a licensing deal for Maxigesic IV® in Ukraine along with the nine nations of the Commonwealth of Independent States earlier this year.

The regulatory approvals of Maxigesic IV® in the six European nations covered by this agreement are anticipated to complete in the upcoming few months, with sales than projected in CY21.

EBOS Group Limited is listed on both NZX & ASX and is the largest & most diversified marketer, wholesaler, and distributor of healthcare and pharmaceutical products across Australasia.

Fisher & Paykel Healthcare Corporation Limited is employed in the designing, production as well as the marketing of products & systems used in the acute care, respiratory care, surgery and for the treatment of OSA (obstructive sleep apnea).

On 21 August 2020, Fisher & Paykel announced at its annual shareholders’ meeting that the Company has commenced planning for its 3rd manufacturing facility in Tijuana, Mexico, which is to be commissioned within the upcoming two years.

The Company completed its 2nd Mexico facility in January 2019 and its 4th New Zealand facility, the Daniell Building, in May 2020.

Operating revenue in FY21 anticipated at NZ$1.61 billion and NPAT expected to be in the range of NZ$365-NZ$385 million.

Dual-listed on ASX and NZX, Summerset Group Holdings Limited is one of the leading operators and developers of retirement villages in New Zealand, with 31 villages completed or in development across the country. The Group provides several living options along with care services to over 5.7k residents. 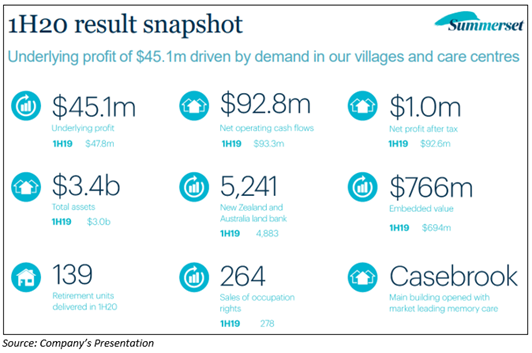 The Group mentioned that the reduction in IFRS profit after tax compared to previous periods was mainly triggered by a negative fair value movement in investment property.