Dividends are not a guaranteed source of income, but they are a common source of income for investors, with corporations paying dividends on a regular basis (quarterly, semi-annually and annually).

The Board of Directors of a company announces dividend payments and, in some cases, also have the authority to revoke them.

Let’s have a look at how these 5 dividend stocks are doing. 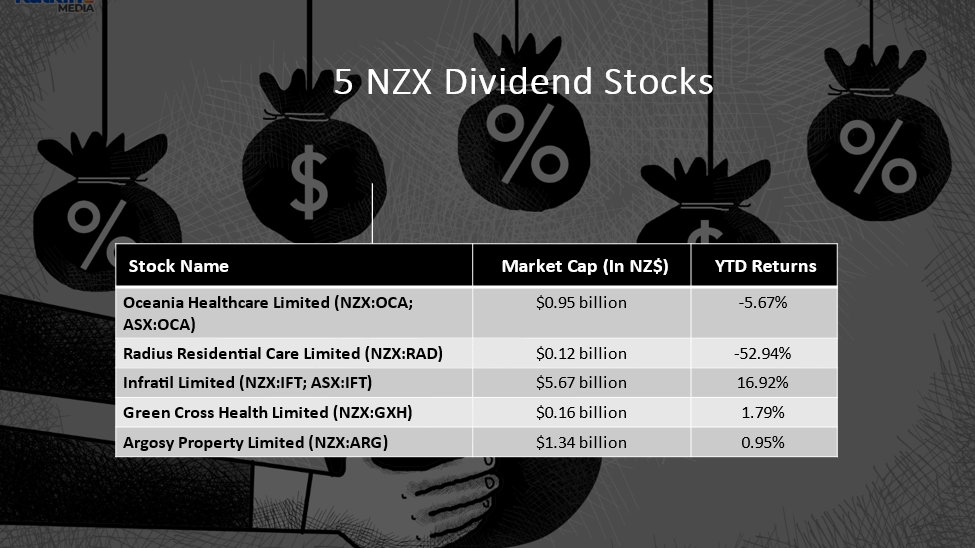 Oceania announced on 10 December that the strike price for the Dividend Reinvestment Plan had been set at $1.2837 per share. The Group had announced an interim dividend of 2.1cps, due to be paid on 20 December.

RELATED READ: 5 NZX healthcare stocks that can be followed ahead of 2022

The Group announced that the foreign exchange rate used for RAD’s interim dividend paid to Australian investors in AUD had been fixed at $0.93888 for FY22.

RAD has declared a dividend of 0.7cps, including full imputation credits for H1 FY22, due to be paid on 23 December 2021.

Infratil announced that it was collaborating with the biggest private radiology supplier in the Bay of Plenty region, Bay Radiology, to further expand its business.

DO READ: Should one consider 3 NZX dividend stocks going ex in January 2022?

The Group declared an interim dividend of 3cps for H1 ended 30 September 2021 amid robust half-year results and a strong balance sheet.

Argosy announced a Q2 cash dividend of 1.6375cps for FY22 with payment to be made on 22 December 2022. The Group also declared that the strike price for the Dividend Reinvestment Plan was $1.518 per share.

Dividend investors must consider that dividends are not guaranteed and can be paid by mature firms that are experiencing slow growth.