As the nation followed the daily routine after Labour Day to begin a new week, let us quickly go through top headlines of the day. 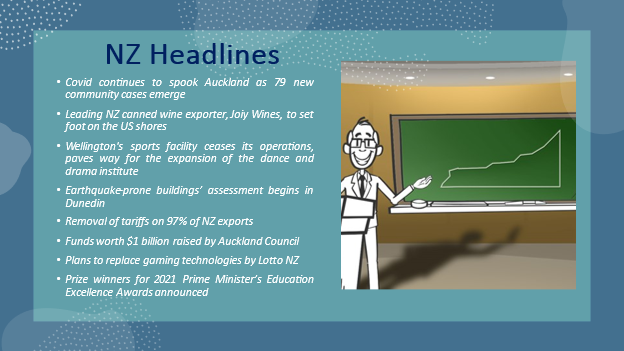 New Zealand continues to witness a rise in its COVID-19 cases with 75 new cases in Auckland and four in Waikato.

Also, 10,660 vaccine doses were given Monday across the country.

Joiy Wines, NZ's famous exporter of canned wines, is now all set for expansion into US markets.

Recently, after winning a significant canned wine competition, the NZ wine exporter has been approached by Wholefoods, the famous retail chain, to foray into the US market.

Junglerama, a Wellington-based children's play area with attached indoor cricket and netball courts, has closed its facility on Monday.

The sports facility will now be shifted out of Wellington and will make room for the expansion of the Te Whaea National Dance & Drama Centre.

Identification works have begun to locate earthquake-prone buildings in Dunedin.

According to estimates, around 3,000 buildings will be assessed for the said risk.

Do Read: What causes an earthquake? All you should know

As of now, assessment of 63 council buildings has been undertaken by The Dunedin City Council.

Removal of tariffs on 97% of NZ exports

The recent NZ-UK trade deal will remove tariffs on 97% of goods after the final agreement is settled, which also includes wine.

The move has been welcomed by wine exporters across the country.

It is pointed out that within 15 years, all tariffs on NZ exports will be abolished.

Auckland Council has reached a milestone by raising NZ$1 billion by way of the Green Bond offer.

The said offer was raised through a sustainable finance framework.

The funds thus raised will assist the environment and support related programmes on climate change action.

In an advance tender notice, the organisation has described its services requirement as broad, covering all aspects of its gaming environment.

It is noted that the winners would be awarded a prize package which comprises professional development opportunities as well as a financial award with NZ$20,000.

The Supreme Award winner would get an additional prize of NZ$30000.