Avalanche, Litecoin: 2 altcoins to watch out for in 2022

Let us skim through some of the latest happenings which are of interest to NZers. 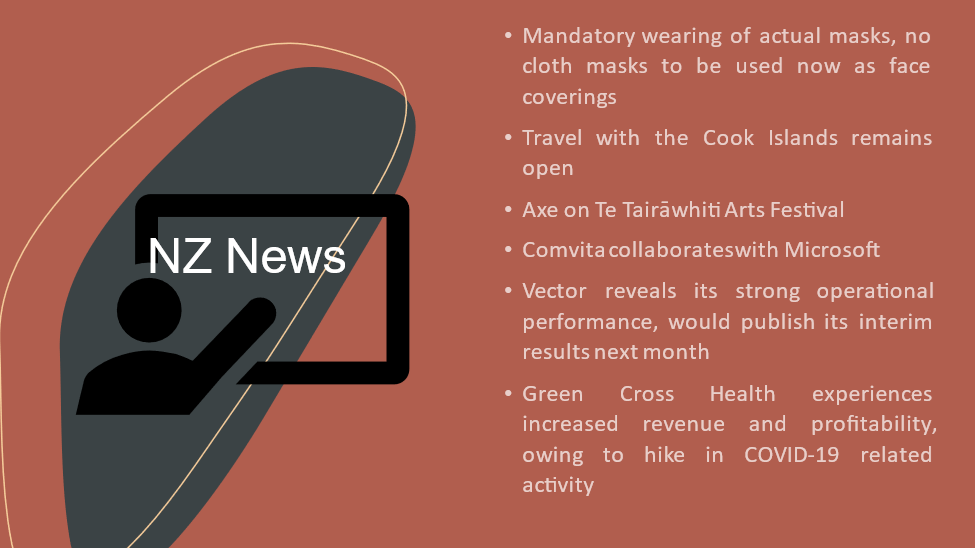 No more cloth masks, actual masks are now a must

The NZ government has laid down stricter rules for wearing masks, as the country has moved to the red traffic setting.

Scarves, bandannas, cloth masks, etc. would not be allowed to cover faces, instead, actual masks are to be worn as face coverings.

Also, government workers covered by a vaccine mandate must wear N95 face masks or surgical masks at their workplaces.

The Cook Islands to continue travel bubble with New Zealand

The Cook Islands has decided to keep its travel bubble with the Kiwi nation open despite the Omicron outbreak.

To travel to the tiny Pacific nation, a traveller must be doubly jabbed and should be tested negative before leaving for the Cook Islands.

Owing to the Omicron outbreak and the nation's move into the red zone, organisers have cancelled the Te Tairāwhiti Arts Festival, which was scheduled to take place between 3-13 February.

It may be held later this year and the purchased tickets might be refunded or donated.

Interesting Read: Which are 4 NZX consumer stocks to be explored this year?

With the launch of this mixed-reality experience, CVT aims to transform consumer retail experience, connecting them to the hive and its unique Aotearoa Mānuka forests.

Vector reveals its strong operational performance, would publish its interim results next month

Must Read: Which are the top four telecom companies in New Zealand?

Its total electricity connection numbers climbed by 1.7%, while its gas network connections rose by 1.9% on pcp, underpinned by Auckland’s continued growth.

Further, it has announced releasing its six-month financial performance ended 31 December 2021 on 25 February.

Owing to an increase in pandemic-related activities across its pharmacy, medical, and community health divisions, the  Company anticipates its NPAT for FY22 to be more than FY21 by NZ$4.5 million-NZ$6.5 million.

It would release its FY22 performance in May.