COVID-19 Travel Restrictions: Why NZ Passport Ranking is Still Among the Bright Spots

Since COVID-19 pandemic broke out, a lot has changed dramatically for the international travel industry, which bore the maximum brunt of virus crisis amid large-scale travel bans imposed across and within nations. While NZ is no exception in experiencing a massive economic blow from coronavirus-induced travel restrictions, Kiwi Land has successfully retained its position amongst the world’s top ten travel friendly passports.

At the time when several other countries have seen the dwindling power of their passports amid poor handling of COVID-19 crisis, NZ held on to its pre-coronavirus passport power rating, as reflected by July 2020 Henley Passport Index rankings.

The latest passport index rankings have placed NZ at the eighth position with visa-free or visa-on-arrival access to 184 countries, similar to April 2020 rankings. Besides, NZ marked an increase from January 2020 rankings when it sat on the ninth place.

While Japan’s passport remained the most powerful one worldwide with access to 191 countries, weak handling of coronavirus pandemic significantly brought down the US passport ranking to 25th place under the existing EU travel ban. 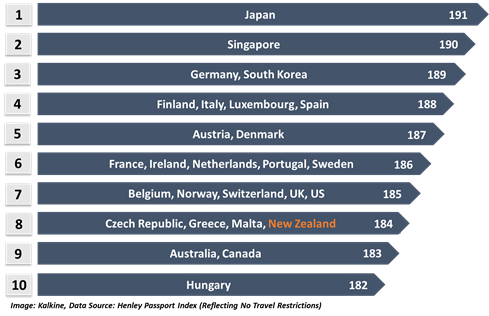 Let us look at five attributes that supported NZ in sustaining its passport power:

While perceived risk of travel and border restrictions led to remarkable shifts in the passport power of other countries, exceptional handling of virus crisis has helped NZ hold on to its travel freedom status.

While NZ is witnessing fresh cases of coronavirus post declaring itself COVID-19 free in June this year, the nation’s approach to battle virus crunch is still being applauded across the globe.

By imposing one of the strictest lockdowns throughout the world and ramping up testing capacity, the country has fairly managed to survive the pandemic, with just 23 active cases as on 10th July 2020.

The credit goes to early enforcement of border restrictions by NZ PM Jacinda Ardern when there were just a few thousand cases worldwide, which enabled Kiwi Land to prevent the community transmission. At the time when other countries were seeking measures to contain the virus spread, NZ aimed for total elimination, introducing a four-stage alert system.

Though the nation has already moved to Alert Level 1 restrictions, it is introducing stringent measures to decelerate the pace of international arrivals post observing a resurgence in cases with the return of NZ citizens.

While NZ has not yet resumed international travel operations, the nation is already appearing on safe travel lists of numerous countries, including the UK and the EU. NZ was recently listed amongst the fifteen safe countries nominated by the EU, that would be exempted of travel restrictions to enter the EU member states.

Besides, Kiwi Land also surfaced on the UK’s potential air-bridge plan, which involves 75 countries from where travellers would not have to undergo mandatory quarantine from July 10 onwards.

The execution of Trans-Tasman travel bubble, anticipated in September 2020, could be a game changer for the NZ and Australian travel industries reeling from coronavirus crisis. A latest report by Ernst & Young Australia projected an injection of NZD 2.03 billion to NZD 4.07 billion in the NZ economy by Christmas via opening of international borders to Australians.

NZ PM has lately hinted the commencement of quarantine-free travel with individual Australian states rather than the entire country following a surge in new infections in Victoria. Throwing the ball in Australia’s court, she notified that NZ has its decision-making framework ready and house in order while it would come down to Australia to make calls on opening state borders.

The NZ Government unveiled a massive NZD 400 million spending boost for the tourism sector in its annual budget, as part of its NZD 50 billion COVID-19 recovery package announced in May this year. The stimulus aimed at redirecting tourist businesses to the Australian and domestic markets.

Besides, tourist businesses were also eligible for the government’s extended wage subsidy scheme, targeted at aiding businesses that suffered over 50 per cent loss in revenue in 30 days prior to application.

While the NZ economy is no different in carrying the weight of coronavirus-driven restrictions, the nation appears to be better placed than several other countries of the world. Supporting this view, S&P Global recently positioned Kiwi Land among the countries surviving the pandemic with less economic damage.

S&P has also projected NZ economy to contract by 5 per cent this year prior to bouncing back to 6 per cent growth next year. While, the Government and Central Bank stimulus measures came to the crunch to aid this recovery.

Though NZ economy is not completely out of the woods yet, some emerging signs are bolstering hopes towards the nation’s V-shaped recovery from downturn, as reflected by revitalisation in electronic card transactions, filled jobs and consumer confidence levels in April, May and June, respectively.

Besides, recently released Retail NZ’s Retail Radar report revealed a considerable improvement in retailer confidence, with 73 per cent of retailers expecting their businesses to sail over the next 12 months.

While NZ seems to be performing reasonably well as compared to several other advanced countries both on health and economic front, the real test would punch the clock when assistance packages would be scaled back. Moreover, the economy is still in a “wait and observe period” with fears of recession and second infections wave kicking in.