Nanotechnology, which grew considerably during the period 1960-1990, is expected to hit US$70 billion in the next five years, according to a recent study by Global Industry Analysts Inc.

Nanotechnology is essentially the study of minute particles, knows as nanoparticles, their design, and applications. Nanoparticles typically range between 1 to 100 nanometres, where one nanometre is one-billionth of a meter. It is difficult to imagine how these tiny particles can provide solutions to big problems across industries. So, what is nanotechnology?

What is nanotechnology and where can it be applied?

In simple words, nanotechnology is the branch of science that involves seeing and regulating atoms and molecules. Every form of matter, be it solid, plasma, gas, or liquid, is made up of tiny atoms next to impossible to see through naked eyes. Nanotechnology manipulates the whole molecular structure of materials to change their intrinsic properties and acquire others on the back of revolutionary applications.

When was nanotechnology discovered?

The idea of nanoscience started with an American Nobel Prize winner Richard Feynman. In 1959, the renowned physicist became the first person to speak about nanotechnology and its applications at the California Institute of Technology. After that, however, this area consolidated with the 21st century, including other areas like micro-manufacturing, organic chemistry, and molecular biology.

With this initiative, there has been no going back ever since the US alone invested over 18 billion dollars in utilising this sector for economic growth.

There has been no looking back ever since. The focus and investments in this field have only been growing, with the US alone pumping more than US$18 billion through its National Nanotechnology Initiative during the period 2001-2013.

What are the different types of nanotechnology?

Nanotechnology is categorised based on the medium on which it works and whether it follows a top-down or bottom-up approach.

Descending (or top-down): In this method, the process and the structures are shrunk at a nanometric scale (1-100 nanometres in size).

Ascending (or bottom-up): The bottom-up approach starts with a single nanometric structure—for example, a molecule – and through a mounting process-creates a more significant mechanism than the one initially. For example, suppose you created the smallest to the biggest snowball.

Dry Nanotechnology: This particular method is used to produce structures in inorganic materials, coal, metals, semiconductors, and  silicon, that don’t function under humidity.

Wet Nanotechnology: Wet nanotechnology is based on biological systems that are present in the aqueous environment. It includes genetic material, enzymes, and other cellular components.

Where can nanotechnology be applied?

As you have covered how this technology started and its various types, you must be curious to know its application. So, these are the applications of nanotechnology –

As mentioned earlier, nanotechnology can be applied in almost every kind of industrial sector. The tech is primarily applied in the following areas: 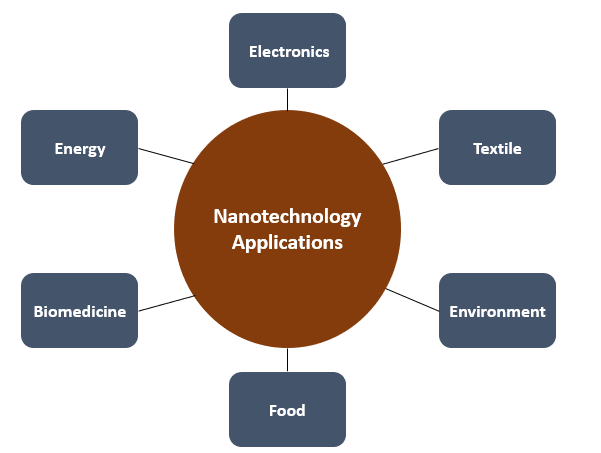 Nanotechnology is widely used in this area, as this field is itself based on similar concepts, i.e., shrinking electronic components. Basically, nanotubes are closed to replace silicon as a material to make smaller, faster, and more efficient devices and microchips.

Nanotechnology decreases costs and produces lighter and stronger wind turbines that improve fuel efficiency. And fortunately, the thermal insulation of some nanocomponents can also help in saving energy.

Some of the nanomaterials’ properties make them ideal for improving early diagnosis and treating cancer or neurodegenerative diseases. For example, nanomaterials innocuously attack cancer cells, i.e., without harming other healthy cells.

Nanobiosensors can be used for detecting the presence of pathogens in food or nanocomposites. This can improve food production by increased mechanical and thermal resistance and decreasing oxygen transfer in the packaged products.

Nanotechnology is used to make smart fabrics that are both stainless and wrinkle-free. This technology makes the material sturdier, lighter, and more durable, such as motorcycle helmets or sports equipment.

As per several reports and experts worldwide, there are both upsides and downsides of nanotechnology. This space is expected to grow globally, packed with technology advancement, increased government support, and increased private investment. Countries like the US, Brazil and Germany are expected to lead the nanotechnology market in the next couple of years.

However, environment, health, and safety risks, coupled with concerns related to commercialisation, can hamper the technology’s potential growth.